Maine became the latest state to initiate a radio-collar study of its moose population when helicopter teams began tagging moose... 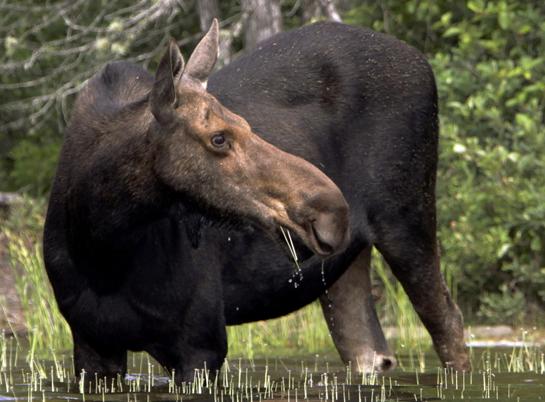 Maine became the latest state to initiate a radio-collar study of its moose population when helicopter teams began tagging moose Wednesday morning. Wildlife officials plan to collar and release up to 70 animals in order to study their range and survival rates, reports the Portland Press Herald.

Although state biologists have not yet detected a threat to Maine’s moose population, the five-year study is designed to identify population increases or decreases in case of a possible decline in the future. The GPS study is the same as the ones already in place in New Hampshire and Minnesota.

Maine is home to an estimated 70,000 moose, and biologists say they seem to be thriving. But neighboring state New Hampshire has suffered substantial declines among its own herds and recently launched a study to understand why. New Hampshire moose fell from roughly 7,000 animals in the 1990s to the current population of just 4,000.

Minnesota’s moose have also taken a huge hit. After a sharp population decline of 35 percent from 2012 to 2013, the Department of Natural Resources called off the state’s 2013 moose hunt last February. All future moose hunts are suspended until the state successfully revives the species. The DNR estimated just 2,760 moose live in Minnesota, an enormous drop from the peak population of nearly 9,000 moose in in 2006.

While Maine’s habitat lacks two of the major factors biologists say are affecting moose in New Hampshire and Minnesota — Maine moose enjoy a colder climate than New Hampshire moose and Maine does not have a wolf population; and wolves are a common predator in Minnesota — there are other things that can threaten the population. DNR officials suspect mortality rates are caused by health problems and other stress-related factors.

Winter ticks caused major concerns when New Hampshire conducted a moose study in the early 2000s. Wildlife officials think the parasites could be to blame for recent declines, and researchers are counting ticks as part of s moose study New Hampshire launched earlier this month.

Helicopter teams will use net guns and tranquilizer guns to subdue cows and calves on the ground. Researchers will then blindfold the moose and attach a GPS device, radio collar, and ear tags for identification. They also collect blood and fecal samples for biologists.

The GPS devices are intended to function for four years, allowing biologists to track survival rates. If a moose dies during that time, biologists will track the animal and collect the carcass to determine cause of death. Biologists will receive usable data as early as this spring.

Maine and New Hampshire plan to share the cost of hiring helicopters and crews. The study will cost each state about $600,000 and is partially funded by federal dollars from the Pittman-Robertson fund.