Moose Hunting: How to Call In Rutting Bulls

There are few experiences in hunting more exciting than calling a 1,200-pound sex-starved bull moose into shooting range. Moose vocalizations... 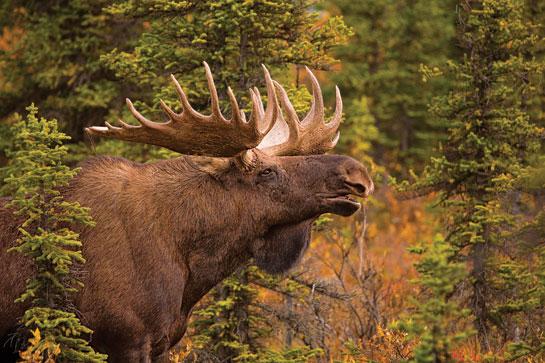 There are few experiences in hunting more exciting than calling a 1,200-pound sex-starved bull moose into shooting range. Moose vocalizations might sound like a bunch of incomprehensible moans, wails, and whines to you, but take heart. With practice, it’s possible to learn how to fool even the wariest bull.

“The secret is to establish the pitch and tone that you will use in your calling and then strive for consistent delivery,” explains Alex Gouthro, who developed the popular Moose Madness instructional videos (gouthrosmoosemadness.com).

Callers like Gouthro make ample use of cow grunts that have an errrh sound formed from the letter R. To call, roll your tongue back and gently touch the roof of your mouth while cupping your hands over your mouth and plugging your nostrils with your two index fingers. With your tongue rolled back, say rrr, which will sound more like rrrhh. Use a quick pull on your stomach muscles to force your diaphragm and lungs to sharply expel the grunt sound. If done properly, it comes out sounding like errrhh. The key is to call from your diaphragm. If you’re having trouble doing this, find someone who’s taken singing lessons (or find a YouTube video) to show you how to vocalize from your diaphragm.

If you haven’t caught the eye of a randy bull, try a broadcast cow call with a calling horn or oil funnel. This is a long, drawn-out call lasting about 10 seconds.
“When I deliver this call, I often move the horn up and down in a figure-eight pattern to mimic the cow’s head moving when calling,” adds Gouthro. “It also makes it sound like the cow is wailing.”

Further simulate cow sounds by splashing around in a pond or lake. Gouthro even fills up his calling horn with water and slowly lets it run out, mimicking a cow urinating into the water.

Don’t be afraid to mix things up by using different calling lengths and sequences. And be patient: It can take hours to bring a bull in. “When I’m calling early in the morning, I give one long cow moan, followed by two short moans,” explains Kevin Deschaine, winner of the 2012 World Invitational Moose Calling Championship. “Try to emphasize the errrh as long as you can from the pit of your stomach.”

Rattle ‘Em Up
If your come-hither sounds don’t pique a bull’s interest, Deschaine suggests switching to rattling antlers. Hit the tines together gently at first, and then get violent by raking them through bushes and over the ground.

Next, it’s time to offer a bull grunt. Deschaine makes the whhu-rrr sound from the pit of his stomach. Do four or five short grunts, followed by another short sequence of cow calls.

Novice callers tend to call too loudly and too often. Moose have phenomenal hearing and can sneak up on you while you’re making a ruckus, so don’t overcall.