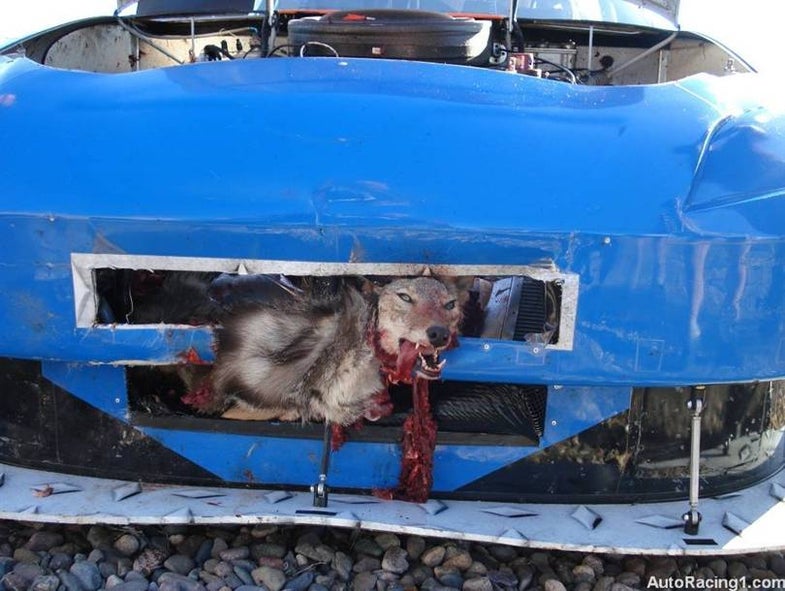 This entry doesn’t have a lot to do with big bucks, but it does have a lot to do with a common occurrence in deer country: animal collisions. What’s interesting about this collision is that it took place at nearly 200 mph with a NASCAR race car. The accompany photos attest to the speed of the car and lack thereof for one unlucky coyote.

Here’s what happened. In early August Joe Gibbs’ racing team driver Brad Coleman was in Arizona at a Toyota proving grounds testing a NASCAR Sprint Cup Series race car. Coleman was running at nearly 200 mph when he caught sight of an animal sneak under the outside guardrail. Things happened fast after that.

“I’m in the middle of the corner, and I’m doing like 190,” Coleman said Friday at Nashville Superspeedway. “I’m just cruising. You run the high line there, because that’s where the most banking is. It’s the high-speed lane. There’s just a guardrail there like on the freeway.”

That’s when Coleman catches sight of Wile E. trying to take a shortcut.

“I see this thing, it must’ve been 100 feet in front of me, just jump out. Right when I saw it come out from under the guardrail, I was like, ‘That’s a coyote,'” Coleman described.

Despite the evasive speed of a coyote, it was no match for the race car and impact was inevitable. Fortunately, the collision didn’t destroy the ability to control the race car.   ”It just started smoking like crazy,” Coleman said. “And it smelled terrible. I didn’t see anything in the mirror, so I was like, ‘I wonder where it went?’ I said, ‘Guys, I hit a coyote. I’m going to come in because I think it screwed up the radiator. I think it clogged up the grille a little bit.'”

It appears as if the car is repairable. The coyote, however, was definitely KIA and I don’t think even the Roadrunner would have been fast enough to avoid being a new hood ornament in this case.