How To Hunt Everything: Moose

With their bulbous noses, squinty eyes, and galumphing gait, moose might be considered intellectually—or at least evolutionarily—challenged. But underestimate this... 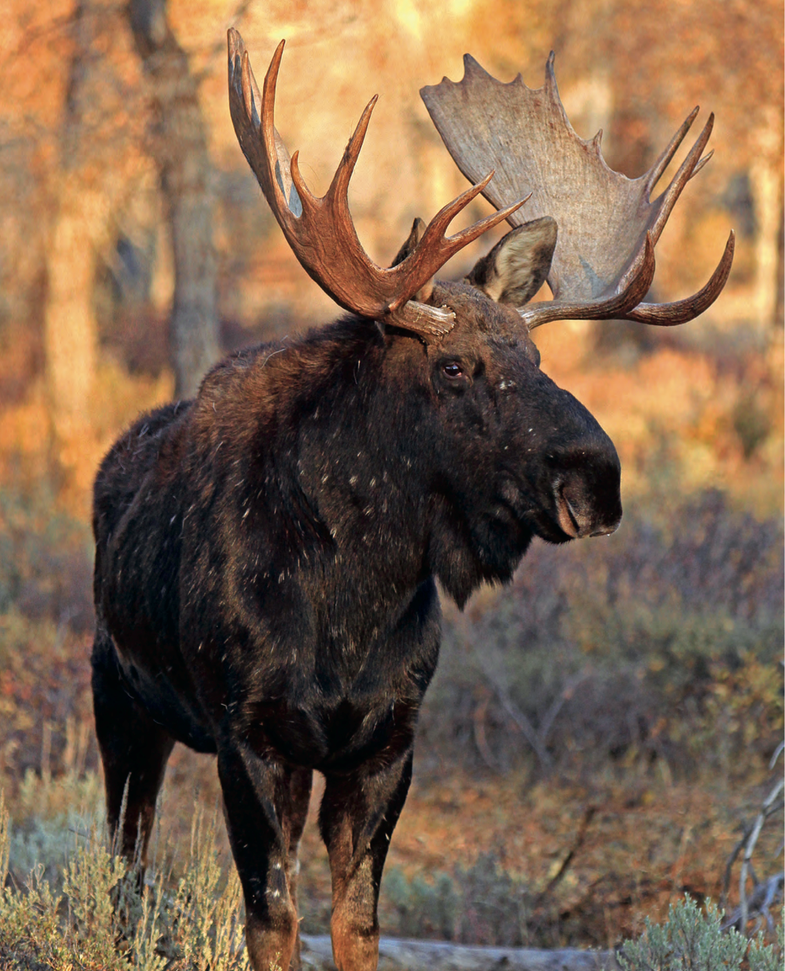 With their bulbous noses, squinty eyes, and galumphing gait, moose might be considered intellectually—or at least evolutionarily—challenged. But underestimate this largest of our deer species at your peril. Moose possess keen senses of smell and hearing, the latter amplified by their oversized, paddle-shaped antlers. A global species, moose of various races range from Maine to the Yukon, west through Alaska and across Russia to Scandinavia. What they all share, however, is a preference for willow bogs, low-slung brush, and mixed-age forest.

A GLOBAL FAMILY
If you doubt the possibility that Asia and North America were once connected, the moose family tree should convince you. The same rangy animal that fishes cress from marshy bogs in Maine is kin to the tag-alder giants of Siberia and Norway, and has relatives at the same latitude around the globe. Moose races extend from the Czech Republic to Mongolia, and from the wild Kamchatka Peninsula of Russia over to Alaska and down south to Colorado. 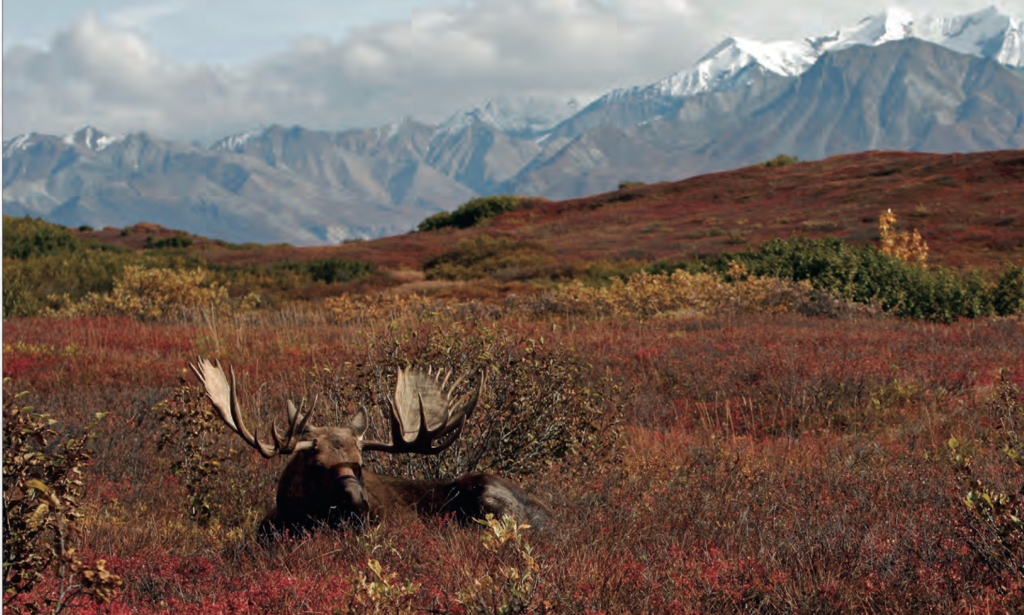 Even the name of the animal reflects this circumpolar distribution. The dewlapped ungulate we call moose is dubbed “älg” in Swedish, “eland” in Dutch, “einu” in Russian, “alnis” in Latvian, and “khandgai” in Mongolian.
Evolutionary biologists think moose originated in Siberia, with one branch heading west to Scandinavian Europe and another heading east, where some ancestors of North America’s subspecies walked the Bering land bridge and then spread south and east over the next millennium. But despite differences in size, the world’s moose look a lot alike, and they certainly behave like one big, extended family. And hunting them involves the same strategies from Alberta to Finland.

The defining attribute of moose—their enormous stature—can be
a liability. Their size obligates them to specific geographies, mainly the cooler northern latitudes, and it makes them a target for apex predators. Where moose share habitat in the American West with reintroduced wolves, the ungulates have experienced sharp declines as packs pick off vulnerable calves. Adult moose rarely flee attacks by wolves and bears. Instead, they back into a defensible space and fight with their long legs and antlers. 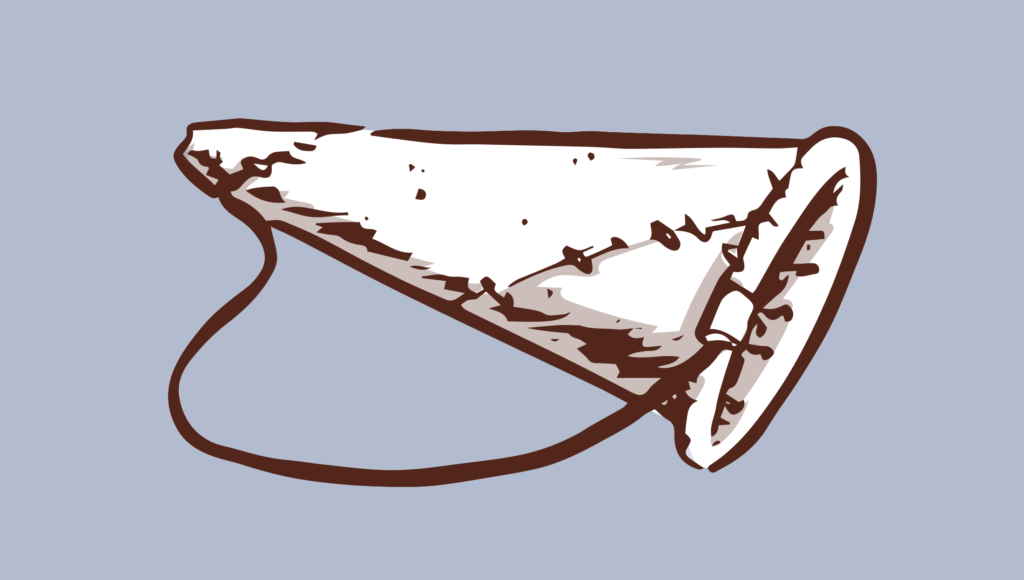 Just as a felt packer hat and a lever-action Marlin are synonymous with Canadian moose hunters of a certain vintage, so is a birch-bark call slung across a shoulder with a rawhide cord.

The call is basically a rustic version of a megaphone, intended to amplify the guttural groans and coughs that mimic a rutting bull.

You can make your own call out of a 1-by-4-foot (0.3-by-1.2-meter) swatch of green bark rolled at an angle and stitched with leather or strips of bark soaked in water. Better yet, pick up a commercially made call at just about every store in moose country. 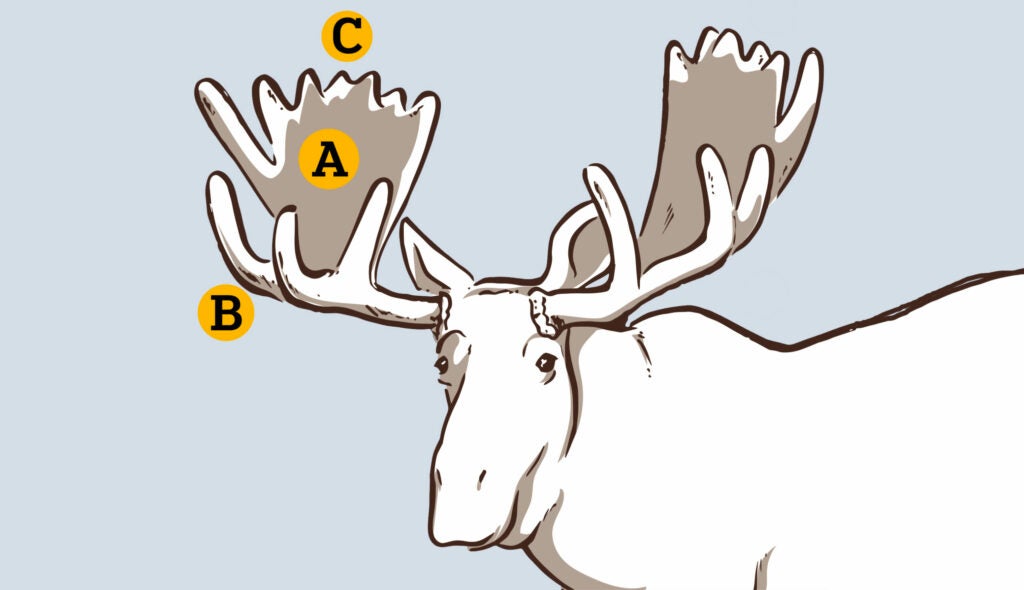    For most of us, a mature bull moose is a trophy regardless of the numeric score of his antlers. But most hunters want at least a quick answer to that eternal question: Should I shoot or not? Here it is: If he’s heavy and tall, shoot! That said, here are some finer points of field-judging.

Spread
While spread (expressed in inches) is shorthand for the quality of a bull, it’s actually one of the least reliable predictors of trophy quality.

A) Palmation
The amount of antler material in the paddles (height times width) is a big determinant of final score. Look for bulls with wide and tall palms. Generally speaking, taller antlers score better because they’re wider than you think.

B) Front Points
These tines, which erupt from the base of the palm and run parallel to a mature bull’s snout, are another crucial ingredient. You want at least two front points, and preferably three or more.

C) Top Points
Most trophies earn one inch of trophy score for every point on the perimeter of the antlers. But mature bulls typically rub off these secondary points to a blunt nose, rendering them as something less than an inch. These points only count as scoreable if they’re 1 inch or longer.

ALWAYS HUNT THE WATER
Where to start your hunt? Guides will tell you that moose are never found far from water, partly because they crave the sort of succulent foods that grow in swamps and bogs, but also because their long-legged bodies and wide-splayed hooves are built for wading shallow ponds and navigating muddy terrain.

The moose’s habitat preferences, in combination with their huge, coal black to rust brown bodies, make these animals easy to see in the wild. And, happily for hunters, moose are relatively tolerant of inspection. Unlike most other members of the deer family, they don’t flee to cover the minute they sense a human. Instead, they’re more likely to wait and watch, a behavior that gives hunters time to size up the trophy quality of bulls or to work in for a closer shot.

Moose are relative loners. They will gather in small herds during October’s breeding season, but during the rest of the year, you’re more likely to see solitary bulls or family groups of a cow or two along with their calves.

Bulls gravitate to cows, rather than vice versa, and because females are relatively sedentary, if you find a group of cows in early October, it’s worth waiting with them for the arrival of a bull. Or, if you prefer to dice the odds in your favor, you can try calling bulls.

A British Columbian guide, Derek Mohr, once told me that rutting bulls sound like an obese man in a truck-stop bathroom, grunting with the effort of relieving himself. A deep, guttural moan with a sort of gasping crescendo is a fair way to describe a rutting bull. Many hunters add a sort of caricature to their calling, spreading their hands—or even holding up their rifles—to look to weak-eyed bulls like a rival male. You can add to the charade by raking brush and snapping limbs to complete the mimicry of a rut-addled bull.

USE MODEST FIREPOWER
For animals of their size—big Canadian and Alaskan bulls will get to 1,800 pounds (816 kg)—moose are fairly easy to kill. Modest magnum calibers or even elk-sized standard calibers will do, as long as your shot selection is good. The important thing is to shoot good-quality bullets that will remain intact after punching through thick hide and massive bones.

Count on follow-up shots, even if the first round was true. Moose have huge circulatory systems and even a vital hit can take time to show effects. Just don’t shoot too high. Like many African antelope, the shoulder hump on a mature bull contains no vital organs, and if a seemingly well-hit moose gets away, it’s a good bet it’s because your bullet hit the vacancy of gristle north of the shoulder blades.

BOAT HUNTING
Since moose are never far from water, hunting from a boat can be highly effective. Whether you paddle a canoe or captain a jet boat, here are some aquatic considerations:

Bring Winches and Rope
Moose rarely drop in their tracks when shot, so count on having to ratchet quarters through dense streamside vegetation.

Paddle Silently
Learn the slice stroke with a canoe paddle so you
don’t make moose-alarming splashes. Turn your paddle 90 degrees following your power stroke so that it never leaves the water. Slice it forward in the water, then turn it to begin the next stroke.

Wear Waders
Whether chest or hip waders, make sure you can stay dry as you slog through bogs and swamps.

Pack a Chainsaw
You’ll likely need the saw to clear sweepers from the current or to clear a trail to deliver your fresh moose meat to the boat.

The All-Purpose Rifle
Moose hunting is often cold, wet, and dirty, and you need a rifle that can handle the elements. A synthetic, all-weather model like the Remington 700 XCR—it stands for “Xtreme Conditions Rifle”—is built for bad weather. Chambered in .300 Win. Mag., it can precisely place long- distance shots.

The Saddle Gun
In much of northern Canada, moose hunting happens from horseback, and the Browning BLR is a great scabbard rifle. Outdoor Life’s Jack O’Connor killed plenty of big bulls with his beloved .270, and untold numbers of trappers made moose meat with their modest .25/35s and .30/30s. Shot placement is everything.

The Slugger
Knockdown power is a key consideration for moose, which can commonly weigh 1,500 pounds (680 kg). For close-quarters hunting, it’s hard to beat a 12-gauge slug. Consider one of the new saboted projectiles, like Federal’s Trophy Copper.