Famous Bull Moose Killed in Fight with Even Bigger Bull

Grumpy the moose ruled Chugach State Park in Alaska. But this fall his antlers got locked with another bull 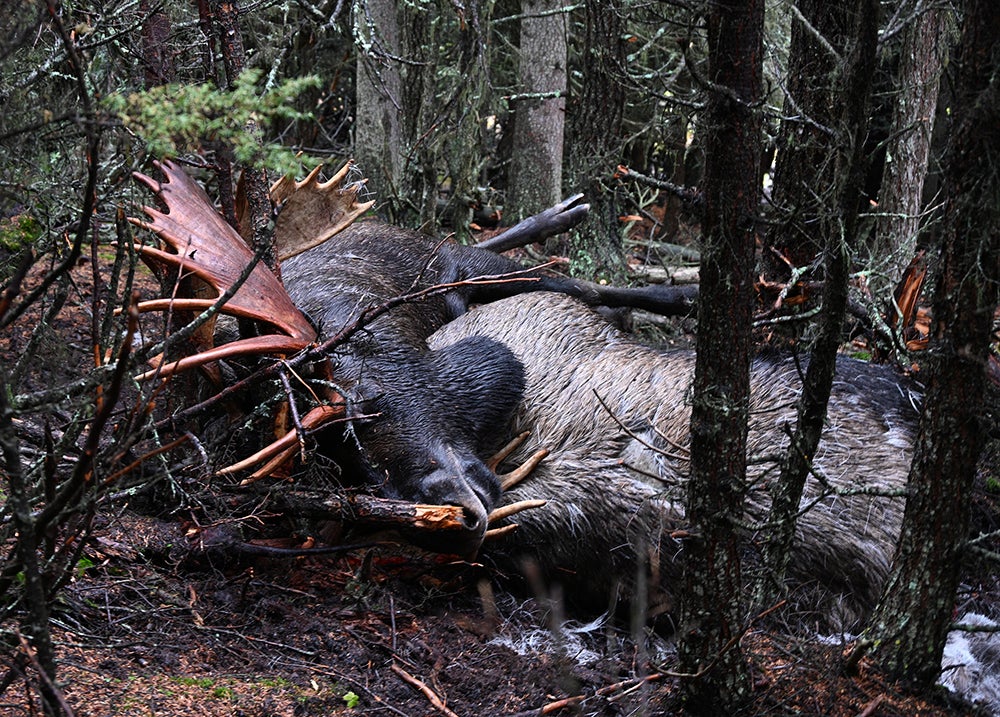 Three women were walking a trail in the Chugach State Park during a rainy, foggy day on Sept. 20. Willow leaves were turning yellow, the air had grown chillier, and the moose rut was nearing its peak. The friends were going through thick forest when they found a dead bull moose lying atop another bull moose. They knew if there was a bear around there’d be a good chance it would become aggressive.

“My instinct was to get the hell out of there, but my friend wanted to take a couple of photos,” one said over the phone.

Chugach State Park is big, wild, and attracts all types of outdoor enthusiasts. The most well-used area of the park is where the women found the moose. It butts up against Anchorage, a city that holds more than half of Alaska’s population and is well-known for moose, brown bears, black bears, and other wildlife prowling its neighborhoods. This makes for interesting and sometimes tense encounters between wildlife and humans, like when a brown bear broke into the zoo and ate a beloved Alpaca named Caesar, or when rutting bull moose, ready to take on anything, shut down traffic on the highway.

The hikers’ photos of the dead moose quickly circulated among a small, hardcore group of moose photographers. New Hampshire residents Rick and Libby Libbey, who own MooseMan Nature Photos, fly to Alaska each August and follow the park’s moose almost every day, rain or shine, until the first part of October (you can see some of the MooseMan Nature Photos video below). By looking at antlers in the photos, they suspected one of the moose to be a bull they’d first encountered in 2017. That fall the bull first showed up to the valley, alone and angry. After a violent display of thrashing the brush, he came out into the open with a 6-foot branch hanging from an antler to confront the Libbeys. They gave him the nickname Grumpy, though that was the only time they saw him act aggressively toward anything other than a rival bull during the six ruts they’d followed him. Nonetheless, the name stuck. The Libbeys knew going to the kill site was dangerous, but they wanted to know for sure.

“It was freaky. The woods were dense. We had no vision, or space to make a decision,” Rick says.

This September there were hardly any cows around, causing bulls to roam further and fights to be more intense. The Libbeys came to an area that was torn up, bulldozed and had numerous trees broken and knocked down by the two 1,500-plus-pound animals. In the midst of the wreckage was one bull bizarrely draped over another bull. It appeared that one bull had charged from the side, slammed the other and in the process locked its left antler with the other moose’s right antler. While bulls do injure and even kill each other during battles, it’s usually a result from antler goring, broken bones, or massive internal bleeding. Death from locking antlers is rare in moose and, when it does happen, bulls usually tangle both antlers head-on and then die from dehydration or starvation. The Libbeys confirmed the moose on the bottom to be Grumpy and guessed he’d suffocated beneath the weight of the even larger bull, which they didn’t recognize.

In the fall of 2020, the same year a brown bear ate Caesar, I got a call from a producer for the BBC Eden: Untamed Planet series. They wanted to know if I could fly to Anchorage immediately and spend a month assisting wildlife filmmaker Shane Moore while he filmed the moose rut. I dropped what I was doing, packed my kit and arrived in early September just as the bulls were shedding the velvet from their antlers. Shane and I had become good friends on a brown bear shoot earlier that year, and both of us quickly befriended the Libbeys. The days grew colder. Cows began moaning, and bulls began racking the brush and grunting. For awhile, there were small and medium bulls all over the place. Then Grumpy showed up and everything changed.

Rick guessed Grumpy was at least 10 years old in 2020. He’d become the dominant bull in the area during the 2019 rut. Since Grumpy was king, and Shane was hoping to film a fight, we spent weeks tailing him. Whenever Grumpy dug a rut pit, cows would rear up on their hind legs and pummel each other with their front hooves to have the first opportunity to lie in his urine-soaked wallow. Sometimes, a small bull would sneak in and roll in one of his rut pits as well. On one occasion, when Grumpy bedded down, I took a nap 40 yards away. Shane roused me from my slumber. Grumpy was standing almost directly over me. Eventually, he went off to survey the valley and make sure all his cows were accounted for.

By the third week of September, he had a harem of about ten cows. For all the buildup, and weeks of posturing and effort, the act of copulation was so quick that if you blinked you might miss it. A cow couldn’t hold Grumpy’s weight for more than a few seconds, so there was no messing around. Occasionally, another big bull would wander into the valley, grunting and thrashing. Most would back down after Grumpy swaggered their way.

One evening two bulls challenged Grumpy at the same time. One slammed into his side and impaled an antler tine deep into his chest in thick brush. I was just yards away recording sound as Grumpy rushed past, flayed open, blood streaming. The following morning, the two new bulls were guarding his harem. I wandered off and combed the area looking for Grumpy—he was central to the film, so, if he was dead or injured, Shane wanted to film it. I found some blood and hair but the trail went cold after a while. When I returned to Shane, Grumpy was standing off in a meadow surrounded by his cows. While I was gone, he’d come back and thrashed the two bulls and then humped one of his cows. Any mature bull moose is an awe-inspiring animal, but Grumpy was next level.

Like all boss bulls, Grumpy’s reign eventually had to come to an end. In 2022, Rick noted he was looking old and was backing down more than normal from challenging other bulls. Since there were hardly any cows around, he may have been saving his energy for battles that really mattered. His last fight couldn’t have been more epic, nor could there have been a better death for an old moose.

Within a week, as bears feasted on his flesh, a new bull fought his way to the top and claimed the valley.