Historically the ESA has proven successful at arresting species teetering on the brink of extinction. It’s the recovery process that moves more slowly 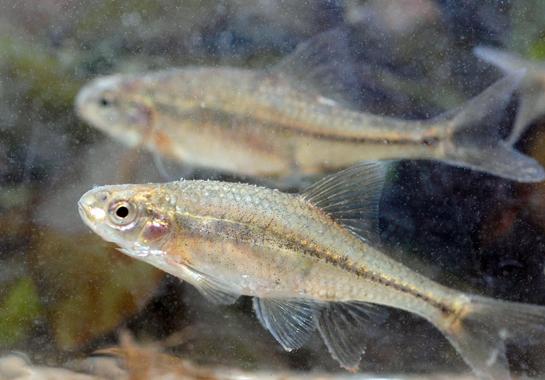 After more than two decades of research and recovery efforts, the U.S. Fish and Wildlife Service proposed Tuesday to remove the Oregon chub from its threatened status under the Endangered Species Act. The three-inch minnow is endemic to the Willamette Valley of western Oregon where it now flourishes in floodplain habitats of sloughs and silty marshes. The chub is the first fish to ever make it off the Endangered Species List — without going extinct.

The ESA turned 40 years old in December and a great deal of criticism has been aimed its way over the last few decades. Just a few short years after its conception, the U.S. Supreme Court ruled the ESA was designed to halt and reverse species extinction “whatever the cost.” But some say that cost is too high. State and federal agencies spent more than $1.7 billion on threatened and endangered species in 2012 alone. Billions of dollars, habitat restrictions, and untold manpower stretching across four decades have recovered just 30 species. There are currently 1,519 threatened and endangered U.S. species on the list.

Historically the ESA has proven successful at arresting species teetering on the brink of extinction. It’s the recovery process that moves more slowly. Although 40 years is a short time to reverse centuries of human impact, at times the ESA list seems like a conservation black hole from which species rarely escape.

But this one tiny fish from Oregon is finally making it off the list. Here’s how.

Swimming Under the Radar

The Oregon chub is a little fish with big repercussions. Hotly contested ESA listings have ranged from the spotted owl to the gray wolf and many in between, but the Oregon chub hasn’t encountered any of the usual opposition to threatened species protections. No litigation or lawsuits arose, and there were no sporting closures or land access restrictions. Many Oregonians had no idea the fish even existed, let alone that extensive recovery efforts to save it have been underway for years. But biologists say those recovery efforts ultimately spell good things for other species in the region–and for the sportsmen and women who enjoy them. That includes game animals and fish like salmon, steelhead, ducks, geese, deer, and elk.

“Something that we like to emphasize here is that we were able to recover a species in the most heavily populated area of Oregon and have very little impact on the day-to-day goings on here,” said Paul Scheerer, a fish biologist with the Oregon Department of Fish and Wildlife. “We didn’t shut down cities, we didn’t shut down fisherman, we didn’t really have much [controversial] impact.”

For the past 22 years Scheerer has been working to boost chub habitat by restoring wetlands in the valley. After survey work was done in the 1980s wildlife officials realized chub populations had plummeted due to habitat loss and predatory fish. Only eight known populations totaling fewer than 1,000 fish existed, and officials listed the chub as endangered in 1993. Scheerer took charge of the recovery plan and teamed up with fellow biologist Brian Bangs and agencies like the U.S. Fish and Wildlife Service and the U.S. Army Corps of Engineers.

USFWS reports show the chub project received about $5.7 million in primarily federal funds since 1996. That breaks down to roughly $316,000 per year. In comparison federal and state agencies spent more than $30 million on chinook salmon in the upper Willamette River in 2012 alone. In that same year salmon and steelhead from the Pacific Northwest comprised nine of the 12 highest-expenditure U.S. species on the list. Agencies spent more than $400 million on recovery for those nine species in 2012, including the aforementioned $30 million.

Despite the minnow-sized budget, more than 80 known populations totaling more than 150,000 chub now inhabit the Willamette River Basin. Biologists focused on restoring wetland habitat and avoiding competition with nonnative game fish like bass and bluegill. The chub was downlisted from endangered to threatened status in 2010, and now officials are hoping to boot it from the list entirely.

“In order to recover this fish, we needed to work in the landscape as it is today and figure out how we can get this fish’s numbers back up,” Scheerer said. “There was no way we were going to get rid of nonnative fish. And there’s no way that our agency was going to because it’s part of what draws fisherman and sells fishing licenses. We did what we could to work … behind the scenes and fortunately we had essentially no impact on [nonnative game fish], and we were able to concurrently recover the chub.”

The key to chub restoration involved recruiting private landowners to provide chub habitat, which turned out to be astonishingly easy. Scheerer and USFWS biologist Rollie White were surprised by the enthusiastic responses from landowners. Although some entered in to Safe Harbor agreements to avoid long term commitments, others did not. As the chub project gained momentum, Scheerer even started receiving calls from residents offering up their land for restoration efforts.

“It’s been a great partnership, it’s really helped a lot,” Scheerer said about the role of landowners. “The areas where the chub are on these properties are not areas that are high value for production. So a lot of times they were surprised that there were any fish in there at all. And then most of these people were really encouraged about being able to do something to help native fish and, in many cases, wildlife that they didn’t even know was on their property.”

Art Johnson is one such landowner. Johnson committed his property near the McKenzie Oxbow by entering into a conservation easement with the McKenzie River Trust. “I think the best thing I can do with this land is have it as a good habitat for fish and other wildlife,” Johnson said.

When biologists were looking for chub populations in the early stages of restoration efforts, they discovered some of the properties protected by the McKenzie River Trust also supported chub. Executive director Joe Moll noted that chub restoration efforts overlapped with McKenzie’s own efforts to restore a healthy river system.

“When you have backchannels and ponds and side channels and wetlands you get a heck of a lot of waterfowl production out of that. You’ve got healthier forests along the river and tremendous deer habitat and not to mention that we’ve got chinook salmon and native cutthroat and rainbow trout. And so a lot of the things that make a healthy river specific to chub also have spinoff benefits for species that are important to sportsmen,” Moll said.

Chub are essentially an indicator that the health of the Willamette River system is improving. In the mid 1900s the Corps of Engineers built 13 separate flood control dams and managed them to protect infrastructure and farmland in the valley. In the process the river lost some of its ability to move and flood naturally, which in turn impacted Oregon’s native species.

While the chub has met little resistance along the road to recovery, it’s certainly not the trend for a listed species. Gary Wise of the Oregon Costal Conservation Association is familiar with obstacles associated with ESA listings. As president of the Willamette Falls CCA chapter, Wise said it seems like fishing opportunities are at an all-time low in Oregon. He said the quality of recreational fishing has diminished because the Molalla River currently contains an ESA-listed winter steelhead. According to ODFW reports the 2013 count for winter steelhead in Willamette Falls tallied fewer than 5,000 fish.

“To get anything done in our stream, we find the ESA listing to be quite cumbersome when we ask for other fishing opportunities,” Wise said. He says the legal protections have nearly paralyzed the agency and discouraged volunteer efforts, which the CCA heavily relies upon. Despite Wise’s familiarity with ESA species in the valley, he was not aware of restoration efforts for the Oregon chub.

Others recognize the burdens of the ESA, but still feel ESA achieves progress toward species recovery. Patrick McGann, editor of the Portland-based Salmon and Steelhead Journal, explained that opinions frequently clash when it comes to salmon and steelhead recovery in the Pacific Northwest. It’s the norm for sportsmen, environmental groups, commercial fishermen, and Native American tribes to disagree about management practices.

“And if we can’t cooperate then we usually end up in court. And that’s been the history of salmon and steelhead management since the mid-90s. It’s a donnybrook. ‘Of course everybody else is wrong and we’re always right,’ and that is, I would say, the most common attitude about salmon and steelhead management under the ESA. There’s not a lot of cooperation unless the cooperation is forced,” said McGann.

One example of such a dispute involved the Bonneville Power Administration’s resistance to spill water over dams to help salmon migration. The BPA ultimately caved and agreed to help fish passage, but it took a series of lawsuits to make it happen. McGann said he’s seen a lot of progress over the last few years in the numbers of returning salmon and steelhead, although problem areas certainly remain.

Scheerer attributes his success with the chub to the partnerships among landowners and multiple agencies. He said the best strategy for species recovery is cooperation, not conflict. “I don’t think you can do it through the courts. I think the way to do it is you sit down, you listen to what people are doing on their land, and then you offer some ideas on how they might be able to help the fish and wildlife that are there. And most of these people want to do that. They just don’t want somebody to tell them how they’re going to do it.”

This approach worked for the chub, and it shows promise for other listed species in the coming years. Biologists say other fish species aren’t far behind, including another Oregon minnow called the Borax lake chub.

But this method may not work for more hotly contested species. There are no harvests for the Oregon chub, and there are no hatcheries to manage. The species is contained within a single basin, and does not cross state or national lines as salmon and steelhead do.

“In the grand scheme of things, chub has been a largely noncontroversial species, which is probably part of the reason we were able to make progress on recovery,” USFWS biologist Rollie White said.