The Biggest Trout of All Time 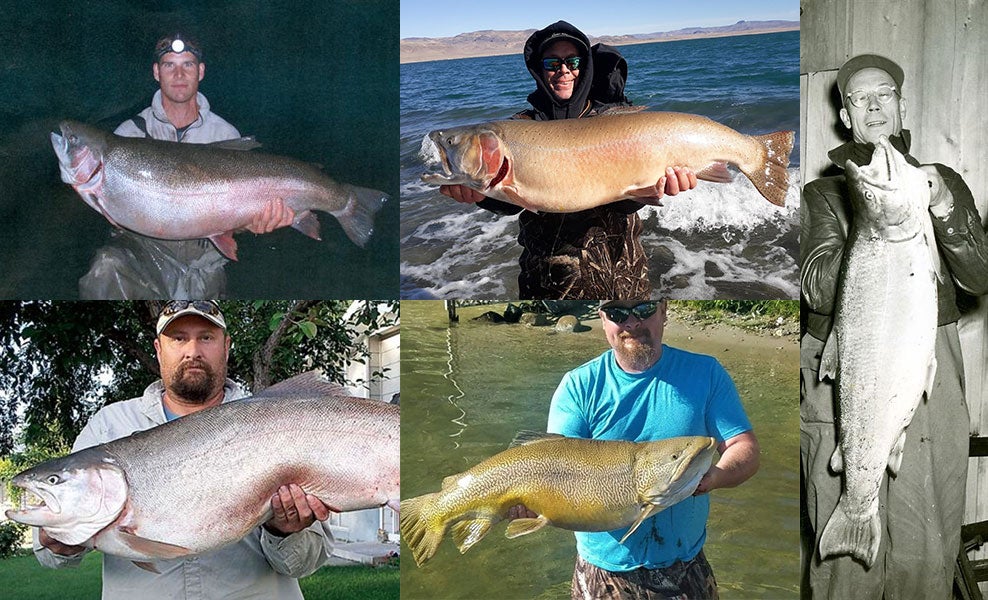 Some of the biggest trout ever caught, according to IGFA records. IGFA
SHARE

In many respects, trout are the “everyman” fish of the United States. Wild trout are revered in cold-flowing streams and rivers from upstate New York to New Mexico. Stocked, hatchery raised trout provide boundless fun and tasty dining for anglers young and old. Whether you’re a refined fly fisherman matching the hatch or a low-tech spinning reel angler dunking worms, trout rise to the occasion.

Sure, bass seem to get the glory, but trout, distinctly native, sleek and colorful, are worthy of all the attention they get. So here’s a look at some of the biggest trout ever caught, by subspecies, according to the International Gamefish Association’s world record listings.

The rainbow is the most prolific, well-known species of trout in North America. Fly fishermen relish their willingness to attack a fly and then go aerial in the ensuing battle. Rainbows are native to North America’s West Coast from southern Alaska to Mexico and inland to central Alberta, Idaho and Nevada. Due to its hardiness and adaptability, it has been a favored stocking fish across most Canadian provinces and the United States from the Great Lakes and eastward down to northern Georgia, Alabama, and Texas. Now a citizen of the world, rainbows have been stocked on nearly every continent. Steelhead are the anadromous versions of rainbows. Like most fish, rainbow coloration varies greatly depending on size, habitat and spawning stage.

The biggest cutthroat on record is a 41-pounder caught Dec. 1, 1925 on Pyramid lake in Nevada by John Skimmerhorn. No other details are known about that catch. The biggest cutthroat ever taken with fly tackle is a 35-inch, 19-pound fish that slurped in a wooly bugger Adam Garcia was casting Nov. 5, 2016 on Nevada’s Pyramid Lake. Garcia was using a Cabela’s rod and reel with 16-pound Ande line. He holds several IGFA records for cutthroats, all caught in Pyramid Lake.

The western United States’ favorite trout is so named by the red (and sometimes yellow or orange) slash lines in the skin folds under the fish’s lower jaw. Their skin is often yellowish or olive green, with the body covered in black spots. Cutthroats boast many sub-varietals, often identified with a prefix related to the watershed where they’re found, such as Yellowstone cutthroat or Snake River cutthroat. Native, inland cutthroats have been found all the way from southern Alberta, Canada to as far south as New Mexico, as far east as Colorado and most of Montana and west as far as Alberta and eastern California. This trout is also routinely raised and stocked in locations ranging from Quebec to Mexico.

Seumas Petrie is the world record holder, with a 44-pound, 5-inch brown trout that measured 38.58 inches long with a 34-inch girth. Petrie caught the trout in Twizel, New Zealand’s (South Island) Ohau Canal on Oct. 27, 2020. He was using an Okuma rod with a Shimano reel spooled with light, 6-pound Berkely line. The fish hit a Nitro Jighead.

These European and Asian natives enjoy great popularity and are now found on every continent except Antarctica. They’re sometimes referred to as German or European brown trout, Lochleven trout, and English trout. Most anglers simply call them “brownies.” They can be found in many U.S. waters from the Great Lakes south to the Appalachians and Ozarks, in some streams and rivers along the Mississippi River, and every state west of Texas and Nebraska to the Pacific coast.

Brownies don’t have the reputation for color sported by many of their cousins, but they make up for it by being a fish known for its tough fight—if you can entice one to bite. Fly fishermen love the quest for big brownies although the fish can be finicky or seemingly spooked by baits.

The biggest tiger trout on record was caught June 26, 2021 by Caylun Peterson in Washington state’s Loon Lake. The trout weighed 24 pounds, 8 ounces and measured 34.50 inches long with a 25-inch girth. Peterson was fishing with a Shakespeare rod and Okuma reel. The fish ate a nightcrawler.

Tigers are a cross between a female brown trout and a male brook trout. Nearly two-thirds of hatchery-bred fish don’t live. Mortality is even higher in the wild. Tiger trout are sterile, unable to reproduce. Tiger trout are known for their aggressiveness, their preference for feeding on the surface, and their zeal in attacking flies and lures. Many tigers are stocked at private European clubs, but they might be found wherever brook trout and brown trout share the same water. The fish are stockier than their parents, with brownish backs, light-colored sides and golden-yellow to brownish-orange bellies. They sport, wavy tiger-like, or maybe worm-track markings on their sides.

The world all-tackle record is held by N. Higgins, with a 32-pound fish caught Oct. 27, 1949 in Idaho’s Lake Pend Oreille. That fish was 40.50 inches long with a 30-inch girth. Higgins was using a Satterlee Mfg. Co. rod with a Pfleuger Pakron reel. The lure was a Lucky Louie Plug.

No fish has since approached that record. The second closest came March 1989, a 23-pound, 2-ounce trout caught by Don Yow in Oregon’s Lake Billy Chinook. That trout was caught with a spinning rod/reel and a Rapala Fat Rap crankbait.

Bull trout are native to Pacific Northwest, found in most major river drainages on both sides of the Continental Divide. They’re not quite the generalists of some of the other trout species, needing cool water and seeming to like deep pools. They are seldom found in waters where temperatures exceed 59 to 64 degrees. Some bull trout are homebodies, residents that spend their entire lives in the same stream or creek, rarely growing larger than 10 inches long. Migratory bull spend winters in larger bodies of water and then migrate back to smaller waters to reproduce. These fish grow considerably larger, 35 inches and up on occasion. For nearly a century, they were confused with Dolly Varden, sometimes called Dolly Varden trout, but a scientist in 1978 proved they are two separate species. Bull trout are fairly colorful and sometimes referred to as Rocky Mountain trout or western brook trout.

The world record laker is a 72-pound monster caught Aug. 19, 1995 by Lloyd Bull who was fishing in the Northwest Territories’ Great Bear Lake, the largest body of water in Canada. The giant lake trout measured 59 inches long with a 32-inch girth. He used a Phillipson rod with a Penn 49M reel and 30-pound Cortland line. He was trolling a Husky Dardevle when the fish hit.

Lake Trout are fierce predators, non-schooling fish that like cold water. In far northern lakes where waters remain cool, they can be found at varying depths. In the southern portions of their range, they tend to hang closer to the bottom.

Lakers are found throughout most of Canada and into Alaska, plus the Great Lakes and other northeastern and northwestern lakes of sufficient depth, such as Lake Champlain. Most fish are caught by trolling deep-diving lures or by jigging.

To many anglers, few things are more beautiful than a six-inch native brookie caught in a remote mountain stream. Brook trout tend to be the smallest of the trout species, with a nice fish weighing up to 2 pounds. Brookies are found across most of the northern United States and into Canada—anywhere you can find water cold enough (consistently below 68 degrees) to support them. They have also been exported to waters in Europe, Australia, Argentina, and New Zealand. Brook trout have colorful spots. Male brook trout see intense color changes as spawning season approaches, with their flanks and bellies turning orange-red with a black stripe along each side.

These trout are geographically limited, with natives found in the upper Kern River basin in Tulare and Kern Counties, California, at elevations above 6,890 feet. They’ve since been introduced to Washington, Idaho and Wyoming, where some believe they are creating hybrids with cutthroats. Goldens are beautiful fish, with a vibrant red streak, accented by parr marks, running the length of the golden-colored body. Black spots dot the skin above the red markings, Even the tail is golden, with black spots. The sides of the head are a blend of rosy red and golden yellow.

Bo Nelson holds the current world record with a 3-pound, 7-ounce Gila trout caught in Arizona’s Frye Mesa Reservoir on March 11, 2011. The fish was 20.13 inches long with an 11-inch girth. Nelson was fly fishing with a Sage SP 390 rod with a Ross Evolution reel spooled with 4-pound line. The trout took a Pheasant Tail fly.

This trout has a very limited range, found in southwestern New Mexico and isolated locations in Arizona, mainly mountain streams in the Gila, San Francisco, Agua Fria and Verde River drainages. It’s classified as a threatened species by the U.S. Fish and Wildlife Service, with angling allowed only in designated locations.

Gila trout resemble golden trout, with iridescent gold sides that blend to a darker shade of copper on the gill covers. Small spots are abundant on the upper half of the body and a faint, salmon-pink band is present on adults, particularly during spawning season.

The world record cutbow was caught by Mark J. Adams on July 25, 2011 in Idaho’s American Falls Reservoir. It weighed 34 pounds, 11 ounces and measured 41.13 inches long with a 27-inch girth. Adams used a Shakespeare Ugly Stick with a Shimano reel spooled with 10-pound line. He was trolling a jig when the record fish bit.

This common hybrid is a cross between a female cutthroat trout and a male rainbow trout. The cutbow combines its parents’ colorful features. It behaves like a hungry cutthroat when it comes to taking flies and then jumps like a rainbow after hook-up. The fish can interbreed on their own. There are also cutbow stocking programs in some states.

The world record Aurora trout weighed 4 pounds, 14 ounces, was 19.6 inches long and sported a 13-inch girth. Angler Robert Bernardo caught it on Oct. 8, 1996 in Ontario’s Carol Lake. He was using a Shakespeare Ugly Stick with a Daiwa SS700 reel spooled with 4-pound Trilene XL line. He was trolling a Size 1 EGB lure.

The record Apache trout was caught by John Baldwin on May 29, 1991 in Arizona’s White Mountain Apache Reservoir. It weighed 5 pounds, 3 ounces, was 23 inches long and had a girth of 14 inches. Baldwin was fly fishing, using a Sage rod, Hardy St. Aidan reel and Climax line. He was throwing a Damsel Fly.