An angler team of two cousins reeled in a possible world-record shortfin mako shark from the shore near Pensacola, Fla.... 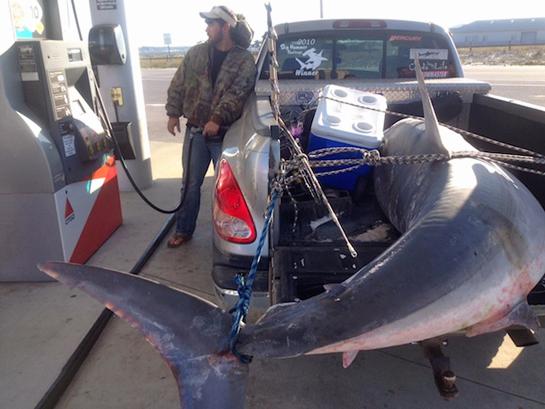 An angler team of two cousins reeled in a possible world-record shortfin mako shark from the shore near Pensacola, Fla. last week. Earnie and Joey Polk had intended to keep the potentially controversial catch under wraps, but a passerby snapped this photo when the two stopped for gas. The photo went viral on social media and the story was soon picked up by a local paper.

Different sources dispute the exact time of the catch, but the shark was caught after dark on Tuesday night or early Wednesday morning last week. The Polks used a kayak to drop bait at least 300 years from shore. Once they hooked the shark, it took a full hour to haul the giant predator onto the sand.

“That’s probably the best fish we ever caught,” Earnie Polk told the Pensacola News Journal. “You’ll spend many, many hours to catch a fish of that caliber, or a fish of that size.”

The mako weighed 805 pounds and measured 11 feet long. Earnie Polk already holds the current world record for a mako with the International Land-Based Shark Fishing Association. He and Joey worked together to take that 684-pound female shortfin in 2009 on Navarre Beach. Overall the pair holds a combined three world records from ILSFA.

Although the Polks caught more than 300 sharks together in 2013, the cousins released all but about 20. The cousins also cooperated with the National Oceanic and Atmospheric Administration to tag almost all of their releases for the agency. They decided against releasing the 805-pounder since it appeared too weary from the hour-long struggle to swim back out to sea. Its potential to break another world record might also have factored into their decision. Earnie Polk said he expects to hand out about 600 pounds of meat to family and friends.