Initially mistaken for a white trash bag, this rare filefish was caught and quickly released this spring. Months later, Florida experts have just identified the fish 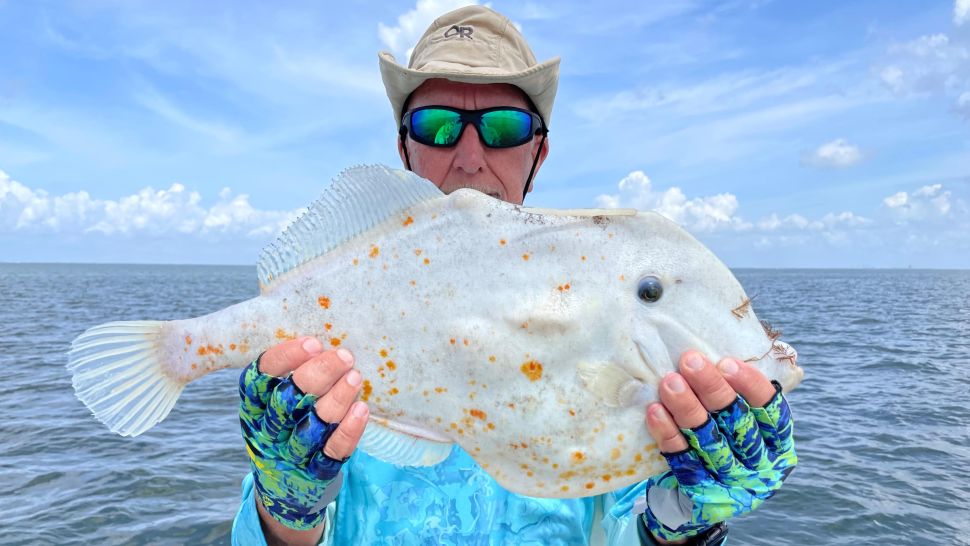 An orange filefish is a Tampa Bay oddity. Thomas Bosworth, via Florida Fish and Wildlife
SHARE

Experts estimate that Florida’s Tampa Bay has as many as 200 different species of fish. But the filefish that seasoned Florida angler Tom Bosworth caught was initially a mystery for both him and his pals.

“We were about ready to call it quits for the day,” Bosworth told Live Science Magazine, when he hooked a fish so pale that he initially thought it was a white plastic trash bag.

“OK, I’ll pull the trash out today,” thought Bosworth, a Tampa Bay area retiree, as he brought the fish up from the depths. “What the heck is that? That’s one of the stranger ones I ever caught.”

Bosworth and his buddies took photos of the 22-inch long white fish, which was flat and covered with orange speckles, before releasing it. But Bosworth was so curious about the fish that he sent the photos to the Florida Fish and Wildlife Conservation Commission for identification.

While Bosworth made his catch on March 31, the FWC didn’t officially identify his catch until August 27 in a Facebook post. They confirmed the catch was an orange filefish (Aluterus schoepfii). While not especially uncommon in Tampa Bay, orange filefish don’t grow much larger than 24 inches. So the one Bosworth landed is an excellent example of the species.

In spite of their name, orange filefish come in many colors and patterns, according to Eric Post, an FWC ichthyology manager. The fish varies in color from olive-gray to orange to white, and exhibits markings that range from light speckles to intricate patterns. Orange filefish live in grass beds, feeding on algae and weeds. They can be found on both sides of the Atlantic, but especially in the western hemisphere from the Carolinas, throughout Florida, the Gulf Coast and south into Mexico, Central America, the Bahamas, Caribbean and to the north coast of South America.

They’re not considered edible, as the filefish has tough, leathery skin and very little meat on its bones. When consumed by humans, orange filefish also are known to cause ciguatera, an illness caused by eating fish that contain toxins produced by a marine microalgae.