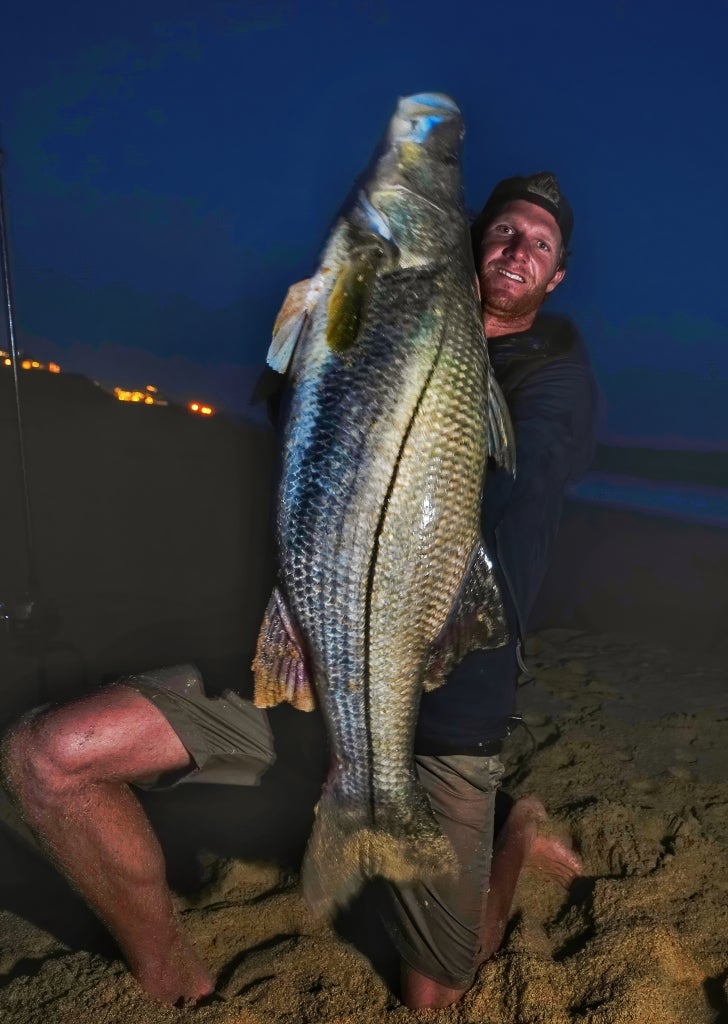 It was the last cast of a stormy fishing day near Cabo San Lucas, Mexico, for surf-casting guide Wesley Brough. And it turned into a record-catch for the veteran angler.

“I threw the lure [an 8.5-inch 3D Savage Gear Mack Stick] and there was a big blast in the wave and it was yanking line off the reel [Daiwa spinning, 100-pound braid, 125-pound mono leader],” Brough told Western Outdoor News. “I really thought it was another big rooster, the light was bad, and it was late. So, I just cranked it [the drag] down and didn’t give it an inch, and a wave pushed it on the beach (after a 6-minute fight) and I saw it wasn’t a big rooster, but a snook.

“It just inhaled that lure, it was all the way in and down. I always release my fish. But it was just too much surgery to get it out when it was so deep.”

So Broguh kept the fish, destined for weighing on certified scales.

Snook are rare catches along that surf area of Cabo, but Brough has caught big snook (up to 44.5-pounds) there previously.

“I measured it, and my 44.5-pounder was longer at 54 inches than this one at 50 inches. But this one was fatter. Short and real fat, almost like it had eaten another snook. So I thought it might be a black snook.”

That was an important question because the record Pacific black snook is 59.8 pounds. The Pacific white snook IGFA record was 47.8 pounds.

If Brough’s fish was a white snook it might be a record, but the fish couldn’t be weighed at a tackle shop on certified scales until the next morning.

Using a bathroom scale, Brough weighed the fish and himself, and by subtracting his weight, the fish was 52 pounds.

The next day the fish was weighed at Minerva’s Tackle in Cabo, a known IGFA weigh site. The scale read 51.3, nearly four pounds over the current record of 47.8 pounds, also set in July of 2004 in Cabo.

“I contacted the IGFA on July 1, and sent photos of fish’s fins because they are unique to Pacific black and white snook,” said Brough. “Two IGFA biologists, Zachery Bellapigna and Bruce Pohlot, confirmed it was a white snook.”

Brough’s record for white snook is now pending the photos, fishing line, and other required paperwork to be submitted.

Rinehart Taxidermy in Cabo is creating a mount of the 51.3 pounder.