How to Catch a World Record Walleye Through the Ice

I received the news via Ma Bell. Not Facebook. Not Twitter. Just a simple phone call with intel that a... 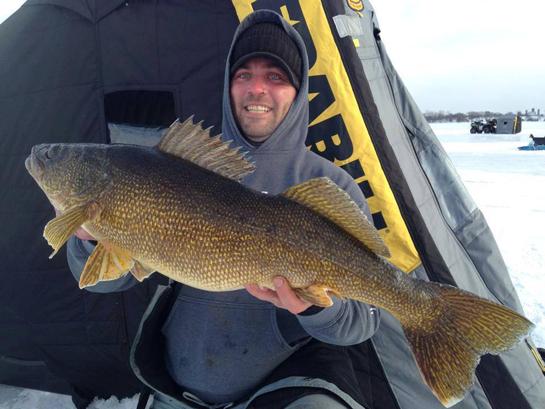 I received the news via Ma Bell. Not Facebook. Not Twitter. Just a simple phone call with intel that a big fish had been caught on Lake Ontario’s Bay of Quinte. In turn, that led to a conversation with the angler, who was explicit the information be kept hush-hush until the paperwork was in process.

Personally, my next move was to call Emmett Brown, Jr., executive director of the Hayward, Wisconsin-based Fresh Water Fishing Hall of Fame. At the time of my first call in early February, Brown hadn’t received the angler’s paperwork. Then, about a week later, on Tuesday, February 18th, Brown called me back and confirmed that the organization had received his application, that “everything appeared in order,” and the giant Bay of Quinte walleye was indeed “pending verification as a new Fresh Water Fishing Hall of Fame C&R walleye, ice fishing, world record.”

The current Fresh Water Fishing Hall of Fame World Record, Division #4 – Ice Fishing, Catch and Release, Longest (only) Pole/Line, Walleye, is currently occupied by two 34-inchers in a tie. On January 22, 2011, angler Jay Millar caught and released a sag-bellied 34-inch walleye reportedly full of eggs, the weight of which will never be known due to a frozen scale. Later that year, on December 22, 2001, angler Jay Manwell caught and released a fish of the same length on Last Mountain Lake, Saskatchewan, Canada.

Still, this fish is bigger. So, if everything checks out in the next few weeks, including notarized statements from witnesses, there will be a new name atop the big fish ledger for largest walleye ever caught and released through the ice.

That name is Grant McAllister.

In other words, the catch was no fluke, as is the case with many record fish. It is the result of what McAllister confesses has been a severe form of “big walleye tunnel vision” over the past 5 years.

The Big Fish Story
“In 2008 I owned an insurance brokerage firm in Toronto, Ontario, went through a transition in life, and decided I was going to pursue my dream,” says McAllister. “I was sick and tired of regrets. I hatched the idea of starting a guide company on the Bay of Quinte and we were on the water 200 to 250 days a year between open and hard water. That taught me a lot. Since, I’ve made it my life mission to find and catch big walleyes.”

On Thursday, January 9th, 2014, McAllister was on the ice at 6:30 a.m. with good friends Keith Mallette, Rob Rizzuto, and Cezar Spirala, owner of Springwood Cottages & Resort, “in hopes of keeping up with what seemed to be a good bite over the last couple of days.”

“We were on the eastern end of the Bay of Quinte fishing one of my big-fish spots, set up over 29 feet. Within five minutes of set up, the first of many loud yells filled the air, ‘Fish on!’ My Marcum LX9 lit up like a Christmas tree and the fish were on fire. By 11:30 a.m. we had landed 19 and missed a bunch more. My PK Spoon looked liked it had been through a war,” says McAllister.

He says the bite then slowed but he knew that fish would start moving through again around 1 pm.

“A common mistake most anglers make on Quinte is only fishing mornings and evenings. But I’ve caught all my big Quinte fish between the hours of 1:00 to 2:30 pm, when everybody’s off the ice having lunch or whatever. I concentrate on high-percentage areas like break lines and wait for those one, two, three, four big marks you’ll see on your flasher during mid-day.”

McAllister continues: “At approximately 1:47 I marked a small bar on my flasher 16 feet down. I reeled up quickly and began trying to coax the fish into biting. Shortly after reeling up, this fish became very interested and the mark kept getting bigger and bigger. From the size of the mark on my LX9 and from years of experience on the Bay, I knew she was a trophy. Within seconds, the fish crushed my PK, I set the hook, my WhiteOut rod buckled and there was nothing but dead weight! I knew this could possibly be ‘The One’ I’d been chasing for so long. I screamed out to my friend Cezar that I needed help and he was there in a flash.”

He says that after a brief but “rather hefty” fight, the “beast was on the ice” and the rest of his group stood around slack-jawed, dumbfounded by the walleye’s size.

“My personal best to date was 14-pounds 7-ounces and 33.25 inches, but just by looking at this one I knew she was bigger. Cezar, being prepared as always, broke out the measuring tape and scale. She measured 35.3 inches long and weighed a whopping 14 pounds 10 ounces. This all happened in under a minute, minute and a half, and the fish was quickly let go without issue.”

McAllister says he didn’t think much about the giant walleye other than it was his new personal best. He posted a photo of the fish to Facebook with the brief status update “The pigs are biting!”

Using the Navionics app on his smartphone, McAllister says he found the fish in a “big mud bowl,” that’s often “loaded with food,” including perch to gizzard shad, alewives, ciscoes, and whitefish.

“It’s basically a staging area where these big walleyes start their migration up to rivers. You’ll find walleyes cruising through, some resting and others actively feeding there because it’s loaded with perch and also intermittent schools of shad and other forage that move through.”

Cat and a String
McAllister’s approach to catching big fish is a one-two punch of calling them in and seducing them to bite with two vastly different jigging cadences.

“I’m a huge advocate of understanding jig cadence. After a lot of trial and error, my typical cadence involves two high lifts of the PK Spoon four or five feet, three short lifts of a foot, then three or four bangs on the bottom. Then repeat. Since I’m really ripping it, I go through a lot of minnows, something most guys don’t do. But it’s huge in drawing these big fish in. Then, once I have them on the flasher, it’s like teasing a cat with a string.”

The ‘cat on a string’ program is very much a finesse game, the goal being to get the walleye to slowly rise in the water column until it has no choice but to eat the bait.

“The Marcum LX-9 allows me to get within a ¼ inch target ID separation, so I put the spoon right on top of the walleye’s head, and slowly bring the fish higher and the higher off the bottom, sometimes six, seven, eight, nine feet before they strike. I’m just shaking that spoon trying to get wiggle out of the minnow. Once you get it in your sights or on your zoom, those fish are going after the minnow and absolutely crush the bait.”

But he says this particular fish came into the sights on his electronics without exhaustive play. “It cruised in 16 feet down over 29 feet of water and pretty much just crushed the spoon.”

“There are a lot of suspended fish in the system. The ones we’re catching are the migratory fish that are chasing fish, so my suspicion is that they’re targeting on the schools of gizzard shad. I saw the mark, reeled up to it, and within seconds the fish just destroyed it. It was special, man.”

He adds that the 2013-2014 hardwater season on Quinte has been amazing. “I’ve caught 12 fish over 10 pounds this winter and all but one have come off a 3/8-ounce PK Spoon in original shad or firetiger glow with a 2-inch dace or chub hooked through from the bottom of the mouth up through the head.”

When asked if the thinks even bigger walleyes reside in Quinte, McAllister answers emphatically, “Yes!”

“There are 15s, 16s, 17s, 18s, and even bigger. I’m convinced the next IGFA world record will come out of Ontario, trumping anything in Arkansas or the Columbia River out west. It’s one of the Great Lakes and has giant fish nobody’s ever seen. And there’s no lack of big, fatty food. No doubt, there are some monsters that would absolutely dwarf this fish. And I’m going to figure out how to catch them.”