The Delaware River is the longest undammed river east of the Mississippi, flowing freely for 390 miles from its Catskills... 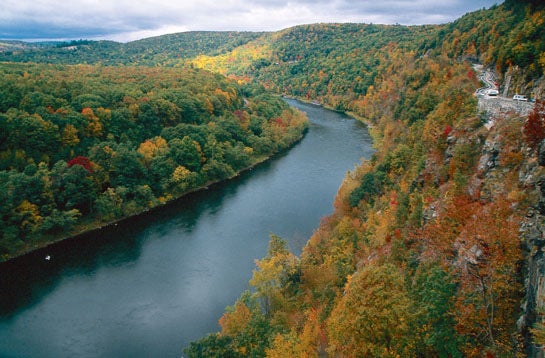 The Delaware River is the longest undammed river east of the Mississippi, flowing freely for 390 miles from its Catskills and Poconos headwaters to the Atlantic Ocean in Delaware Bay, furnishing drinking water for 15 million people in four states.

But it could all be gone with the stroke of a pen, according to Delaware Riverkeeper Network Director Maya van Rossum, who says support from “the hunting and fishing community” is vital in defending a “tenuous” three-year moratorium on shale oil drilling — hydraulic fracking — in the Delaware River watershed.

Drilling has been on hold in the watershed since May 2010 when the Delaware River Basin Commission (DRBC) decided to develop its own drilling regulations. The commission was set to vote on regulations in November 2011, but that vote was canceled in the face of overwhelming opposition to any drilling.

“Because there are no regulations, there can’t be any drilling — the moratorium still holds,” van Rossum said. “But it’s tenuous and there is growing pressure to open (the watershed) to drilling.”

**Pressure to frack, baby, frack **
Van Rossum says if the moratorium is lifted, the commission may have little legal option but to approve at least 13 pending pipeline projects and up to 64,000 proposed oil wells in the watershed.

“Each well requires on average 5 million gallons of water a day,” van Rossum said. “It takes hundreds of billions of gallons of water to sustain the outstanding trout fishing on the East and West branches of the Delaware. How much of that water is going to be siphoned off if the moratorium on drilling is lifted?”

She said there are so many pending well-drilling proposals along the Lackawaxen River, a critical Delaware tributary and a “cherished fishing spot,” that “70 percent of the river’s flow would be used to provide fracking water.”

Any reduction in the upper Delaware’s downstream flow will also allow saltwater to infiltrate freshwater wells, especially in New Jersey, and threaten endangered species, such as the Atlantic sturgeon, van Rossum said.

“It’s all about the water and the fish — and about the people who appreciate what they have and want to protect it,” she added.

The only way to retain the drilling moratorium is to keep pressure on the DRBC as well as on state and federal legislators, she said.

The DRBC consists of five voting members from Pennsylvania, New York, New Jersey and Delaware, as well as the U.S. Army Corps of Engineers. Van Rossum said when the DRBC’s proposed drilling rules were introduced for a vote in 2011; Pennsylvania was in favor whereas Delaware and New York — which has its own statewide drilling ban — were opposed.

The vote was tabled when New Jersey and the ACE “opted not to vote on it at all in the face of political pressure” by conservation and environmental groups, “such as the fishing and hunting community,” she said.

Now, van Rossum says, Pennsylvania’s DRBC representatives and state legislators are lobbying for the commission to schedule another vote on lifting the moratorium.

All it will take to do so is for the DRBC to “schedule a meeting, hold a hearing and pass the regulations,” she said.

If that happens, van Rossum said, “The people who are going to lose the first and the most are the fishermen and the businesses that depend on them.”
**
Pipelines are not good neighbors**
While excessive water consumption alone is sufficient grounds to retain the moratorium, van Rossum said there are many subsidiary, yet equally damaging, environmental effects from drilling that will “devastate” fisheries and wildlife habitats.

“Fracked wells will leak — it’s just a question of when, not whether,” she said. “In addition, there are regular spills and accidents and the pollution from destructive land use — roads, well pads — and transportation to serve the fracked sites.”

If fracking is permitted, the region would be criss-crossed by a network of pipelines, restricting access to public lands. One example, Van Rossum said, is how a pre-moratorium pipeline spanning the river between High Point State Park in New Jersey and Delaware State Forest in Pennsylvania has restricted access to public lands for security reasons.

“When they are drilling, try to drive into the park,” she said. “Not only is access encumbered, but you have to present your ID to guards, who track who is coming and going and IDing them, which is a really horrible experience for people who just want to visit a state park.”

Van Rossum recently testified before the Senate Natural Resources Committee in opposition to the Natural Gas Pipeline Permitting Reform Act, which would limit environmental review of any pipeline project to no more than 90 days. If a decision is not rendered by then, the drilling permit is automatically approved.

“This is such a bad idea. (Drillers) are already exempted from most environmental protection laws and federal law supersedes state laws,” she said, noting the only federal regulatory tool that applies uniformly to all states is the Clean Water Act.

“A single 24-mile stretch of one pipeline project in my watershed will affect an estimated 450 acres of land, cross 90 waterbodies and 136 wetlands and cut through two state-preserved forests — not to mention the uncounted number of private properties taken through eminent domain,” van Rossum said. “And that section is only about half of the total length of the project. Is 90 days enough time for a state or federal agency to review all the impacts?”

If adopted, she said, the bill would make it impossible for federal and state regulators to do their jobs. Essentially “their authority is being taken away from them,” she said. “I really look at it as the stealing of authority from federal agencies that are supposed to be protecting our land and water.”

Other threats, other solutions
Drilling and development aren’t the only threats to the Delaware that van Rossum and the DRN are combating. Finding alternatives to dams and impoundments to control flooding is part of a broader national debate about dams.

Van Rossum and the DRN were pivotal in preventing construction of the $19.8 million Dark Hollow Dam on Neshaminy Creek in 2011 2001, which proponents claimed was needed for flood control in Pennsylvania’s Bucks County.

The 56-foot dam would have impounded more than 650 acres of open space, slow the flow of the creek and reduce its depth by 3 feet, thus endangering aquatic life, van Rossum said.

“The dam was a band aid,” she said. “It still would leave downstream people in the path of harm.”

The DRN proposed a simple “nonstructural approach” to resolving the issue, van Rossum said. “Rather than spend the money on a dam, use the money to buy the (affected) land, which is already marginal and flood-prone. Don’t spend that money on a temporary band aid; instead invest in a voluntary buy-out.”

The non-structural approach, which was widely supported once it was proposed as an alternate, eliminates potential for development, pollution, ensures access and protects habitat, she said.

“We fight new demands for structural solutions to flooding with the unassailable fact that floodplains flood,” van Rossum said. “Floodplains are supposed to flood — this is part of the natural and beneficial life of a river.”

The approach is replicable (see here) and can be used elsewhere, she said, noting there are a “series of fund sources that could be used for a non-structural strategy,” including grants from the federal government.

PIPELINE ACT PETITION
Join the Delaware Riverkeeper Network and other conservation groups in contacting your Congressional representative and demanding that they reject passage of the Natural Gas Pipeline Permitting Reform Act. You can also sign this petition: http://petitions.moveon.org/sign/congress-protect-our-1/

CONTACT DELAWARE RIVER BASIN COMMISSION MEMBERS
The Delaware River Basin Commission will next meet on Sept. 11-12 in Mount Laurel, N.J. Lifting the drilling moratorium is not on the agenda and cannot be formally pondered without scheduling a public hearing with at least 30 days of notice.

But that doesn’t mean it isn’t a good idea to contact the governors of all four Delaware Basin states, as well as the commander of the U.S. Army Corps of Engineers North Atlantic Division. All are ex officio members of the commission represented by voting surrogates at DRBC meetings.