Last month we wrote about a mysterious canine shot in Missouri that could have been a coyote, a wolf, or... 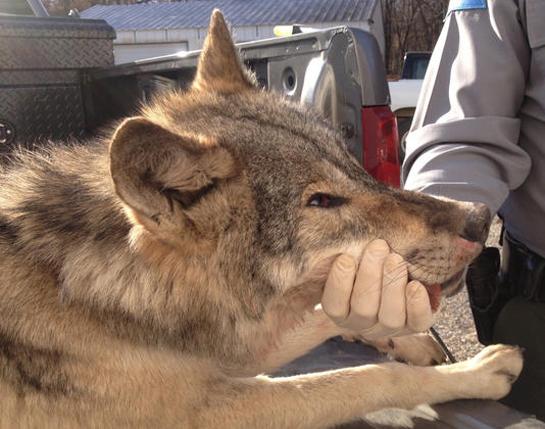 Last month we wrote about a mysterious canine shot in Missouri that could have been a coyote, a wolf, or possibly a coyote-wolf hybrid. The DNA results are back, and tests confirm the animal is indeed a wolf. The U.S. Fish and Wildlife Service conducted the research and verified the 80-pound female was a two-year-old gray wolf, according to the Missouri Department of Conservation’s website.

A southeast Missouri man was hunting in Wayne County this past November when he shot what he thought was a coyote. Closer inspection of the large canine led him to contact the MDC and surrender the carcass. Wolves are a protected species in Missouri, and Missouri coyotes seldom weigh more than 30 pounds.

“Because of the great variety in the bodies of dogs, coyotes and wolves, it’s important that we get DNA evidence to ensure correct identification of the animal,” MDC Resource Scientist Jeff Beringer said in a release on their website. “We have DNA signatures from all captive wolves and wolf-hybrids in the state. We also compare DNA from the animal in question with DNA of wolves around the country to help determine the origin of the animal.”

The wolf bore no tags, tattoos, or microchips to suggest it had escaped captivity, and no known breeding wolf populations exist in Missouri. During the past decade a handful of hunters killed wolves within state lines, typically mistaking them for coyotes. Beringer said wolves that do turn up are usually young animals in search of new territory that have strayed from states like Minnesota, Wisconsin, and Michigan. The USFWS confirmed this wolf most resembled the wolves found in the Great Lakes region.