President Trump is expected to begin the unprecedented task of reviewing – and potentially unraveling – decades of National Monuments... 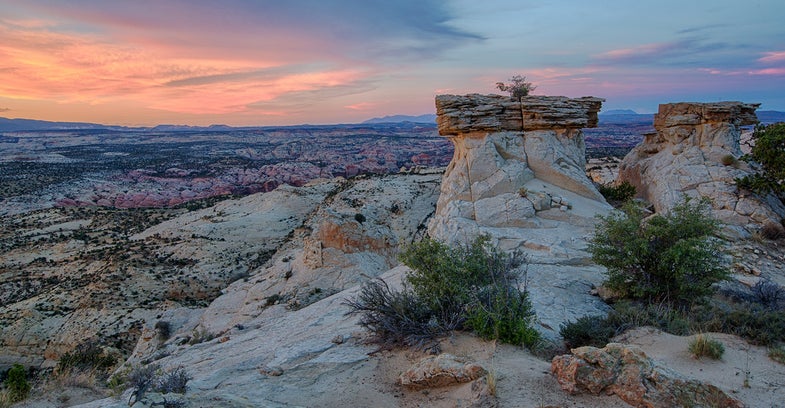 President Trump is expected to begin the unprecedented task of reviewing – and potentially unraveling – decades of National Monuments created by presidents before him.

According to news broken by the Salt Lake City Tribune, Trump is drafting an executive order to review national monuments created since 1996. Under the Antiquities Act, presidents have the authority to define national monuments protecting significant resources on federal land, such as BLM or national forest. The law does not apply to private or state-controlled land.

The law has been on the books since 1906. President Theodore Roosevelt used it to protect 18 special places. The most famous is probably the Grand Canyon, which later became a national park. Other examples from Roosevelt’s era are Muir Woods in California, Devil’s Tower in Wyoming, and Chaco Canyon in New Mexico.

But until now, no president has reviewed or undone monuments created by previous presidents.

Much of the current conflict over monuments stem from Utah. Politicians there are peeved over President Obama’s declaration of Bears Ears National Monument, and are still fuming over President Clinton’s Grand Staircase/Escalante.

Having camped and hiked in the area that is now Bears Ears National Monument and in the Grand Canyon, I can attest that both are remarkable slices of America, with stunning scenery and mind-blowing geology. They are replete with archaeological artifacts left by ancient people. Critics in Utah say Obama overreached his power when he created the 1.3-million-acre Bears Ears monument. National Monuments, they argue, should be smaller, more specific sites.

It’s interesting to note that, according to historian Douglas Brinkley, that’s what some people in Arizona said when Roosevelt drew lines around 800,000-acres of the Grand Canyon. It’s hard to find anyone today who would claim that the Grand Canyon is not a national treasure.

Rocky Mountain Elk Foundation is on a roll

No one knows that better than the Rocky Mountain Elk Foundation. That understanding shaped two recent conservation projects (both were in the works for months but announced in April. RMEF recently purchased a 10-acre parcel in Emery County, Utah, 20 miles west of Huntington, that is key to access the Manti-La Sal National Forest. RMEF then handed the parcel over to the national forest. That protects access to 3,800 acres of national forest, not just for elk hunting but hiking, camping, horseback riding and other activities. Other supporters include the Back Country Horsemen of Utah, San Rafael chapter, and Emery County.

Meanwhile in Nevada, RMEF has worked with a conservation-minded landowner, the Nevada Department of Wildlife, and the USDA Natural Resource Conservation Service to protect 4,500 acres of key wildlife habitat in northeast Nevada via a voluntary conservation easement agreement. The project also improves access to nearly 19,000 acres of adjacent public land.

This parcel is located approximately 70 miles north of Elko, in the Owyhee River watershed just east of the Independence Mountain Range.

Conservation Easements are powerful tools for landowners who want to protect their land from development. It’s important to note that easements are part of private property rights and do not automatically require public access to private land. That makes this case special.

As part of the transaction, the state wildlife agency holds an access agreement that allows public access for hunting and other recreational activities to the Humboldt-Toiyabe National Forest and Bureau of Land Management lands which border the Wild Horse Ranch.

Tip of the hat to RMEF. I’m glad my membership is up to date.

Rep. Jason Chaffetz, R-Utah, surprised his supporters by announcing on Facebook that he will not seek reelection in 2018 – or run for any other office that year.

Chaffetz is a relatively young member of Congress and has got a lot of attention lately as chairman of the powerful House Oversight Committee, which is charged with investigating ethical violations ranging from Hilary Clinton’s emails to allegations over Donald Trump’s business connections.

But sportsmen have been more focused on Chaffetz’s actions toward public lands. Chaffetz made headlines earlier this year by sponsoring two bills that irked sportsmen. One of those bills would have disposed of 3.3 million acres of federal public land in several western states. Sportsmen were outraged by that bill and Chaffetz humbly withdrew it.

Chaffetz did continue to support another bill, however, that would eliminate law enforcement authority from land management agencies such as the Forest Service and Bureau of Land Management.

Pundits have speculated what might be motivating Chaffetz to step down. Some hint he may be positioning himself toward some other office, such as the governor of Utah. Chaffetz, however, is keeping his cards close to his vest.

“For those that would speculate otherwise, let me be clear that I have no ulterior motives. I am healthy. I am confident I would continue to be re-elected by large margins,” he said on Facebook.

The legal odyssey of Nevada’s Bundy family and those who supported its anti-public lands agenda took another odd twist as a split jury delivered its verdicts in Las Vegas this week.

Let’s review: Nevada rancher Cliven Bundy ran cattle on Bureau of Land Management property near Bunkerville for decades. Bundy had a longstanding disagreement with BLM, including not paying $1 million in grazing fees. In 2014, a federal judge disagreed with Bundy and told the BLM to round up Bundy’s cattle, which were on public land.

When the BLM sent rangers and law enforcement to round up the stock, Bundy responded by rallying scores of supporters in his defense. The Bundyistas and the authorities had an armed standoff in the sage, with the feds eventually backing down to avoid potential bloodshed.

Cliven Bundy and two sons were arrested later, related to another standoff in Oregon.

Since February, the federal jury has heard the case of six lower-level defendants wrapped up in the Nevada standoff. After long deliberations, the jury found two of those defendants guilty.

According to the Associated Press, Gregory Burleson, of Arizona, and Todd Engel, of Idaho, both were convicted of obstruction of justice and interstate travel in aid of extortion. Burleson was also found guilty of assault on a federal officer, threatening a federal law enforcement officer, interference with interstate commerce by extortion, and multiple firearms charges.

However, jurors could not agree on the guilt of four other defendants, so the judge declared a mistrial in those cases.

Cliven Bundy and his sons are still in the clink in Nevada, waiting their own day in court on the 2014 charges.