After this spring’s census efforts indicated breeding sage-grouse were at unprecedented low numbers, the state of Montana’s Wildlife Commission contemplated... 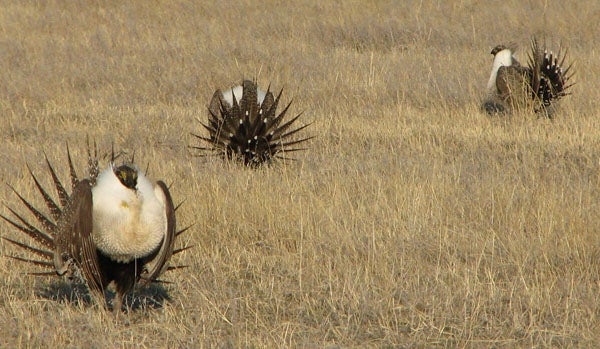 After this spring’s census efforts indicated breeding sage-grouse were at unprecedented low numbers, the state of Montana’s Wildlife Commission contemplated a recommendation from the wildlife agency to close the 2014 sage-grouse hunting season state-wide. This action should concern all sportsmen whether they hunt sage-grouse or not. It also begs the question: Is hunting part of the problem of declining grouse numbers – or part of the solution?

The fact is that no scientific evidence indicates hunting is a major cause of declines in populations of sage-grouse or a major threat relative to other factors. Even the U.S. Fish and Wildlife Service indicated that hunting mortality is not a major threat to the overall persistence of populations. That said, sage-grouse are a different beast. They are relatively long-lived and have lower reproduction compared to many other game birds. As such, they must be managed more conservatively than, say, pheasants, or quail or ruffed grouse.

Over the last 10-15 years, state wildlife agencies have been managing sage-grouse harvest more conservatively due to declining populations. Hunters have seen opportunity whittled away in most states along with outright closures in parts of Wyoming and Idaho and all of North and South Dakota. Sportsmen have relinquished opportunity regardless of the true cause of population declines.

Hunting didn’t shrink the range of sage-grouse by nearly half in the past few decades. Nor does hunting alter habitat conditions, serve as a vector for West Nile virus, result in energy development, or provoke fire or invasive species. These are all real, documented threats to sage-grouse that have left hunters sacrificing opportunity.

There is no denying that some level of harvest can impact sage-grouse, but well regulated hunting keeps sportsmen engaged and involved in conservation efforts for the bird. Harvest information provides critical data on sage-grouse population characteristics that we have no other realistic way of obtaining. This in turn allows managers to identify problem areas, track population status, and fine tune harvest and habitat management plans.

Sportsmen also have a longstanding investment in sage-grouse conservation. License fees, taxes on ammunition and firearms, and other funds generated by hunters have exceeded $130 million in sage-grouse management and conservation in the past decade. Sage-grouse hunters also add to local economies when they purchase fuel, groceries, and motel rooms while on their excursions.

Sportsmen have put their money where their mouth is to conserve sage-grouse while relinquishing hunting opportunities in the process. They have been part of the solution. We should expect decision makers, government officials, industry, private landowners and other stakeholders to strive to maintain populations of sage-grouse that can offer long-term, sustainable harvest.

If we close hunting seasons, we lose a group of strong advocates for the species and further erode efforts to conserve sage-grouse, possibly moving the bird towards listing under the Endangered Species Act. This in turn would mean the states could lose control of managing the greater sage-grouse as a game bird if it is listed by the Fish and Wildlife Service in the not so distant future.

The path forward is through solid conservation plans developed cooperatively by both the states and federal agencies that will assure effective conservation measures to provide abundant, sustainable populations of sage-grouse while balancing energy, livestock grazing, and other uses of the land. All stakeholders and decision-makers must be part of the solution if we to succeed in conserving sage-grouse, avoiding the need for the bird to be listed, and preserving our Western economy and outdoor traditions.

Ed Arnett, Ph.D., is a wildlife biologist and director of the Center for Responsible Energy Development of the Theodore Roosevelt Conservation Partnership.