How to Get Your Girlfriend, Wife, or Significant Other to Hunt and Fish with You (More than Once) 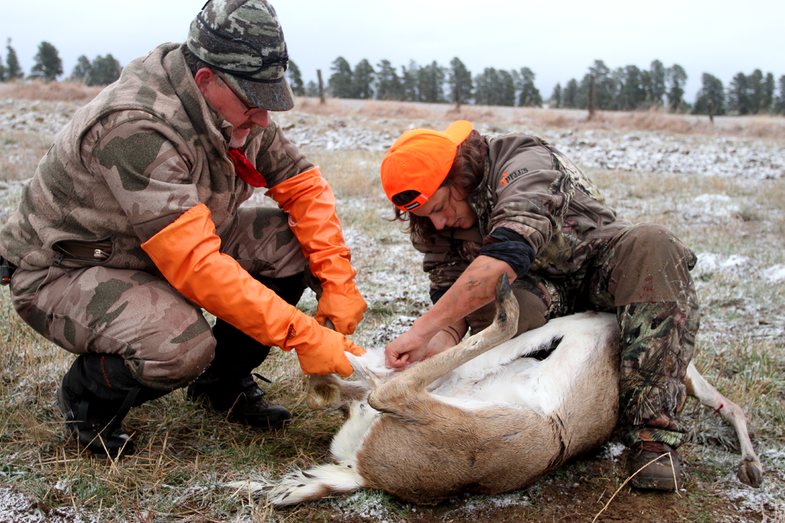 If you’re one of those guys who hunts to escape the woman in his life, then I can’t help you. Good luck with that.

If you’ve already got someone who shares your outdoor obsession, congratulations. You’re living the dream.

But if your significant other doesn’t understand your other true love, then consider doing something about it. Because if they’re hooked on hunting, fishing, shooting—whatever it is you spend all your money on—you both get to maximize the time you spend together while doing what you love outdoors. And who you love, if you want to get really crazy.

If your lady has previously declared a lack of interest in the outdoors, then fine. You get a pass. But also…maybe you’re just not trying hard enough.

1. Invite her to go with you

Sounds simple, doesn’t it? That’s because it is simple. Some people just don’t think to ask. Often the very guy lamenting how his girl doesn’t hunt is the one who never invites her in the first place.

Think about why you hunt. Someone probably invited you, right? Dad or a buddy asked you one day. Even if you’d always wanted to go, you needed someone to supply the gear and show you the ropes. Maybe they even dragged you out of bed and along with them until you learned to love it.

Following that logic, it’s no great mystery why more women don’t hunt. It’s because no one ever asked them to go. So they found other hobbies. In most cases, fathers asked sons, and that was that. There are exceptions to this rule, of course, and I’m always delighted when I hear them. But that’s about the gist of it.

So next time you head out, ask her to join you. Maybe she’s been hoping you would.

If she turns down your oh-so-tempting invitation–and begging proves unsuccessful—take a step back. Do you ever join her for her favorite activities? If so, point that out and arrange a trade. If not, then you’ve got work to do. Join her for a yoga class, mountain biking, line dancing, kickboxing—whatever it is that she enjoys in her free time. Because then it’s her turn to try something new.

If your lady is allergic to fresh air—or professes an undying love for all animals but the ones on her plate—maybe don’t take her on a sub-zero coyote hunt at three in the morning. Ease her into it. If you’re looking for sheds, bring her along. There’s a good chance nothing’s going to die, she’s able to talk and ask questions, and she might even be better at spotting antlers than you.

Worst case scenario? You guys don’t score any sheds and end up on a hike together.

If and when you do get your girlfriend out the door, keep in mind that she might know more than you think. Don’t talk down to her. Before you launch into an explanation of rutting deer behavior or how to rig that leech, ask how familiar she is with the topic.

Because there’s nothing like listening to someone explain something you already know.

5. Let her do it herself

And if she doesn’t know how to do something, no sweat. Just don’t do it for her. The only way to learn a new skill is to try it yourself. Sure, demonstrate how to fillet that crappie—but let her clean the next one. Better yet, make your cuts at the same time on different fish so she can follow along.

Let her do her thing until she needs help. She’ll tell you when she does.

If you invite your girlfriend to hunt or fish with you and your buddies, include her in the whole experience. The planning, the stories, the dirty jokes, the cursing, the mishaps—all of it. Don’t act differently because she’s there. That’s guaranteed to make everybody uncomfortable.

And if you’re worried your girlfriend can’t hang when you and the guys are being yourselves, then you’ve got bigger problems.

As previously established, your lady friend is not a child (see Nos. 4 through 6). Include her in the planning and on-the-ground decision making. Don’t say she dropped that duck when, really, it was you. Don’t tell her the deer she killed is older than it is, or that it’s bigger than your real guess. Be kind, yes, but don’t sugarcoat things.

Instead, problem-solve together how to improve her accuracy. Discuss how old or big you actually think the deer is, and why. If you really want her to learn and improve her outdoor skills, be honest. And if you don’t know the answer to a question or the solution to a problem, just say so. You can’t be an expert at everything.

Just because your girlfriend didn’t take to hunting big game or shooting handguns doesn’t mean she wouldn’t like to try bowfishing or busting clays at the range. There are a million things to do in the great outdoors, and odds are good she’ll find something she likes.

This is not relationship advice, nor should it be interpreted as such. I will not be held responsible for any blow ups or break ups that result from following or failing to correctly follow any of the tips above. Everyone is different, with their own quirks and learning styles, so what might work for one person might fail for another.

But if you doubt the importance of these tips, let me assure you: I’ve got plenty of stories that suggest otherwise. So don’t discount the advice of a hunter who knows a thing or two about women. Don’t get too tied up in the headline, either. This isn’t just about women who don’t share their guys’ hobby. It applies to anyone, regardless of gender, age, or your relationship to them.

And no. You don’t have to replace your best hunting buddy. This is about making a new one.