Will Coronavirus Get More People into Hunting? 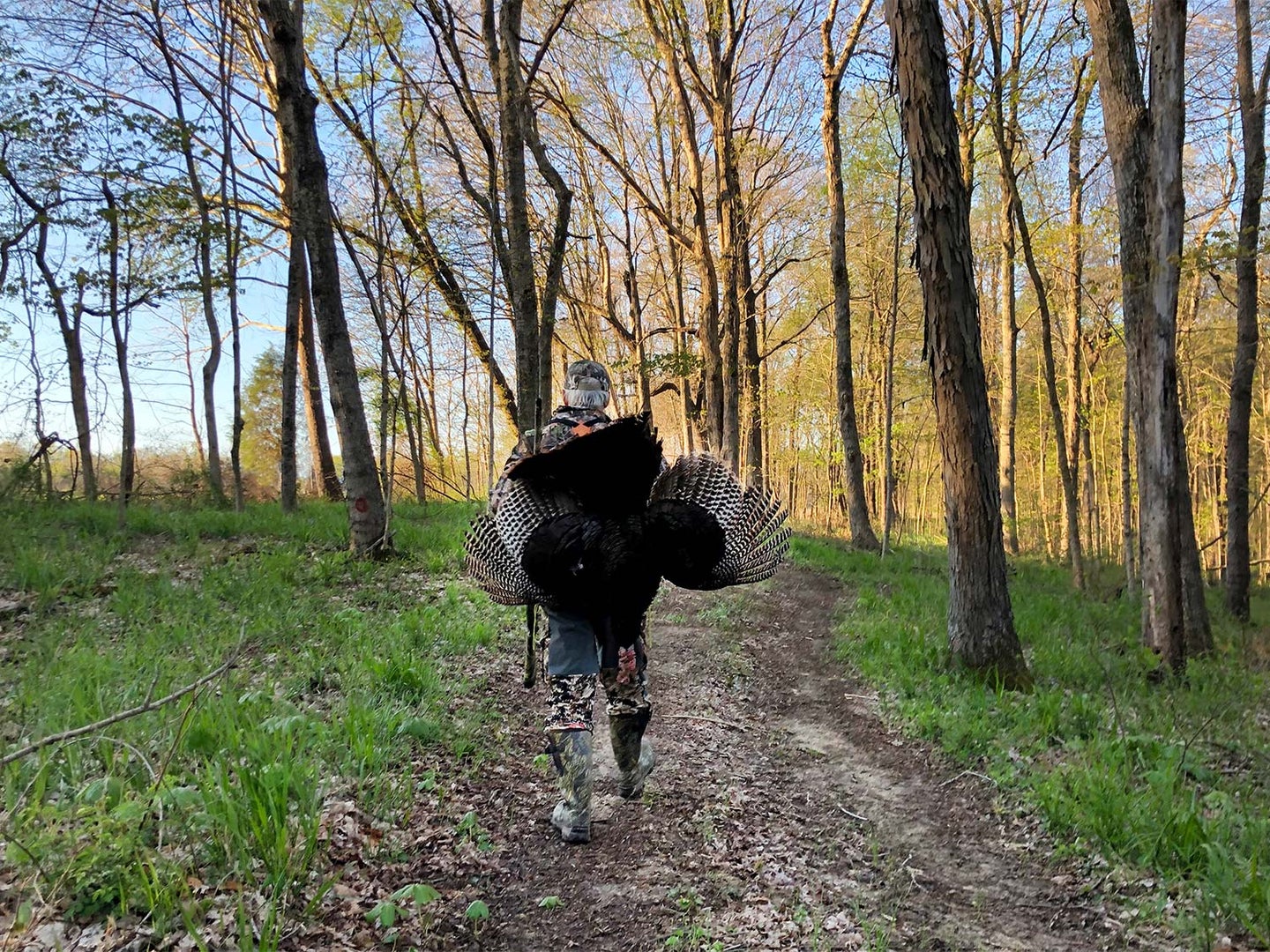 Hunter walking through the woods with a turkey. Natalie Krebs
SHARE

Like most folks these days, hunters are sore from whiplash. Our community is well-suited to weathering this pandemic, but we’re also not immune to the fallout. In the six weeks since President Trump declared a national emergency, we’ve already endured travel restrictions, shooting range and public-land closures, and canceled seasons. Yet many folks have extra time for spring hunting, and firearm and ammo companies have seen a spike in consumer sales, with the FBI reporting 3.7 million background checks—the highest ever recorded in a single month—in March 2020.

So, how is this all going to affect hunter numbers? The future of hunting participation was already on the ropes, and we haven’t been making much progress since we discovered we were in trouble a few years ago. Despite ramped-up recruitment efforts, U.S. Fish and Wildlife data reveals that we’ve lost some 255,000 hunters nationwide between fiscal years 2016 and 2020. And that figure is actually worse than it sounds because the national population is growing even as hunter numbers are shrinking.

If you’re a pessimist, you could make the case that corona could knock out hunting for good. But if life ever returns to normal—or even if it doesn’t—this crisis looks an awful lot like a boon for hunter numbers.

Every state’s game agency is reacting to the virus in a slightly different way. Some states chose to just outlaw camping while others closed public hunting areas altogether. Some states halted tag sales, and others didn’t change anything at all.

Instead of effectively dividing turkey season along socioeconomic lines, as Illinois did by closing state lands, states like Nebraska and Kansas suspended non-resident turkey tag sales to reduce travel to their states. Non-residents who purchased Nebraska and Kansas tags before the cut-off will enjoy reduced competition from out-of-staters.

Minnesota’s turkey license sales are up 15 percent, but that also coincides with the state’s transition to over-the-counter tags in place of the previous partial lottery system, which required hunters to draw a tag for the first two weeks of the season. So it’s difficult to establish which variable—the virus, easily-available tags, or something else—could be responsible for the bump.

I’ve received plenty of anecdotal reports from buddies that their hunting spots are unusually crowded this year. Field & Stream shotguns editor Phil Bourjaily says his usual public-land spot got pounded this spring, and contributor Will Brantley says his usual haunt, Land Between the Lakes, is slammed even for a normally pressured area.

“If hunter numbers are down, you wouldn’t know it by going to LBL during a pandemic,” says Brantley, who relocated after two different hunters walked in on his weekday setup. When he reached his truck, he found the parking area packed. “There’s absolutely no doubt more people are in the woods right now. Maybe not more licenses being sold, but license buyers are more active.”

In Indiana, at least, folks are definitely buying more licenses. The state hasn’t changed its annual turkey season in response to the virus, and resident tag purchases have increased by 36.5 percent, from 12,669 tags in 2019 to 17,297 in 2020 (as of 8 a.m. on opening day). Non-resident tags are up nearly 23 percent. Indiana does have a stay-at-home order, but is allowing for travel to hunting areas.

Certain states are also tracking public land usage, and a memo from turkey biologists Michael Chamberlin and Bret Collier even expressed concern about the unprecedented number of hunters in the woods right now, and that potential to hasten existing declines in our national turkey population. They cite preliminary data about increased harvests despite no uptick in turkey populations:

For instance, as of [April 13], numbers of hunters using WMAs in Georgia have increased 47% from 2019 (Georgia Department of Natural Resources, unpublished data)…harvest during the first 23 days of the statewide season in Georgia is 26% greater than in 2019, and 43% higher on public lands – despite no appreciable recent increases in production across populations. Furthermore, the percentages of hunters that have harvested 2 birds has increased 34%, whereas hunters harvesting 3 birds (state bag limit) has increased 46% from 2019.

Chamberlin and Collier urge hunters to exercise thoughtful restraint for the long-term benefit of our national turkey population, noting that “in these extraordinary and challenging times, the future ability for us to enjoy hunting wild turkeys could be negatively impacted by our collective actions during spring 2020. We hope all turkey hunters will agree, the future of the resource should be our singular most important focus.”

While it’s not possible to establish causality between COVID and license sales (hey, maybe all those recruitment efforts are finally kicking in), there’s certainly a correlation (and turkey harvests are certainly up with increased activity among existing license-buyers). Many seasons are still underway, so it’s hard to say what final license sales will look like. But this snapshot indicates turkey hunters are up this year. And even if national turkey license sales are comparable to 2019, we can definitively say that interest in turkey hunting has spiked. Google search trends are a good indication of what’s on people’s minds, and the terms “turkey hunting” and “turkey season” are both at an all-time high right now.

Jenifer Wisniewski, the chief of communications and outreach at the Tennessee Wildlife Resource Agency, is ahead of her peers at other state agencies when it comes to marketing hunting and fishing licenses. Which is to say, she uses modern marketing techniques that consumer brands like Cabela’s or Danner Boots already use to attract your business, but that haven’t been adopted by most state game agencies yet. Once lockdowns arrived, Wisniewski leveraged them. She sent targeted emails to lapsed anglers, and paid to promote a Facebook PSA video of a conservation officer clarifying what hunting and fishing activities were legal and safe during lockdown.

After barely more than a month of license sales for the 2020-2021 season, which started March 1, Tennessee is already beating the previous year’s license sales by $1 million dollars, according to Wisniewski in an April 7 interview. (Note: Tennessee sells combined hunting and fishing licenses.) That extra revenue could be a fluke: Maybe people are buying licenses much earlier in the year, and that trend won’t continue. Or maybe lapsed hunters and anglers suddenly have time to hunt and fish, and are remembering how much they like it.

On the other hand, some hunters might be unwilling or unable to purchase licenses given the current economic crisis and historic unemployment rate. This could be especially problematic for states who rely on high-dollar non-resident tags, both because they’re expensive and because of potential travel fears and restrictions. After the 2008 financial crisis, we saw a slight national drop (a loss of 1.2 percent) in the number of hunters who bought licenses in fiscal year 2009, according to USFWS data. It’s possible we would see it again in FY2021 (that would include any licenses bought from Oct. 1, 2020 through Sept. 30 2021). However, it’s too early to tell how deep or severe our current recession will be.

Initially, states were forced to cancel in-person hunter safety classes and learn-to-hunt classes, which already see high demand and long wait lists. These logistical barriers could be the final straw for once-eager would-be hunters who can’t get the resources they need, and who finally abandon hunting. For instance, Wisniewski reported that Tennessee had to suspend its hunting academy classes, which had roughly 350 adults and families who’d signed up for turkey hunting courses and other outdoor skills classes.

Meanwhile, New York State had to cancel more than 210 hunter education courses (from March 18 to April 30), which resulted in almost 3,500 students who couldn’t attend their scheduled hunter, bowhunter, or trapper ed classes. What’s more, those numbers would have been higher if the state hadn’t stopped new courses from opening. Happily, the NY Department of Environmental Conservation suspended the mandatory field-day requirements, and is temporarily allowing residents to receive certification with an online-only course.

Frankly, New York’s in-person hunter safety requirements are a logistical nightmare in urban areas like New York City, and a barrier to entry in the best of times. This policy shift could help states like New York better understand the benefits of making hunter ed more accessible (and digital). Suspending in-person hunter ed requirements may be temporary, but if we see more license purchases as a result, it would be self-sabotage for state agencies to reenact them.

The trouble is, all of these additional licenses sales could be a blip. Once folks return to work, perhaps we’ll lose all the extra hunters we gained this spring. So what’s most important when considering the impact of coronavirus on hunter numbers is how our ranks endure over time. Perhaps prodigal hunters are remembering how much fun hunting is. And perhaps it’ll be the shove toward self-reliance that non-hunters needed to finally learn to hunt.

“How would you market hunting during COVID? ‘Struggling to find meat at the grocery store? We’re not—join us!” joked Hank Forester, the hunting heritage programs manager of QDMA, during the early stages of COVID-19 lockdowns last month. “But unfortunately, that’s where we’re at today. I believe there is an opportunity with COVID. Whether we capitalize on it will be the question of the ages. I think this stuff gets in the psyche of the public, and I don’t know if we ever fully recover. And I think it’s fairly normal that people today want to be self-reliant.”

Google search trends seem to back up Forester’s take. “How to hunt” is also at an all-time high. (The query “how to fish” has seen an even more pronounced jump in popularity, putting that term at another all-time high.) The interest from non-hunters is there—folks want to learn to hunt. If you want to help save hunting once social distancing restrictions ease up, consider mentoring a non-hunter. You can invite a friend to join you in the fall, or sign up with proven learn-to-hunt offerings like QDMA’s Field to Fork program.

And while you might not be feeling too generous after bumping into a bunch of hunters this turkey season, remember that hunting in America needs to last much longer than our national lockdown.