Biology tells us that a wild turkey hen will lay 10 or more eggs per clutch, then nest again if... 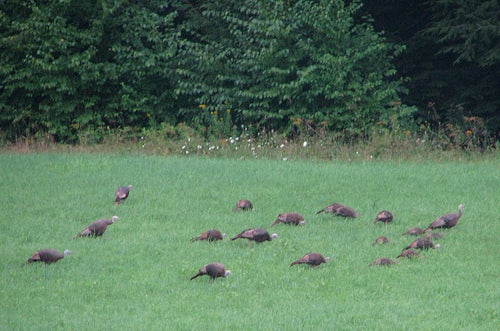 Biology tells us that a wild turkey hen will lay 10 or more eggs per clutch, then nest again if the initial attempt is unproductive. Studies show that some unhatched poults die in the egg due to predation. According to a number of sources, the probability of a poult reaching two weeks of age after hatching is just around 30 percent due to weather factors, additional predation, and so on.

The wild turkey’s high reproductive rate speaks to a short lifespan and high mortality. Still, wild turkeys are everywhere thanks to sound game management in the latter half of the 20th Century, and continued due diligence by many hunters and the powers-that-be. Here in northern New England we seem to be trending toward mega-hatches this year. A warm, dry summer seems to be one factor.

Just today, I saw a photo of 16 poults with just one brood hen.

Just last Thursday, I saw with my own two eyes a single New Hampshire brood hen (bearded at that!), with 15 young chicken-sized birds.

Several other New England buddies report seeing multiple adult hens running together with 30-plus turkeys of the year. Other sources here in the Northeast confirm similar sightings.

It might just be the year of the mega-hatch in these parts.

While some buddies in my expansive turkey circle have spoken of poor hatches in other parts of the country this summer, I’m wondering if things have turned around for some of you guys as scouting goes. Seeing more turkeys these days? Any mega-hatch flocks?