Editor’s Note: Massachusetts turkey hunter George Hamilton reports on an incident that took place while he was turkey hunting last... 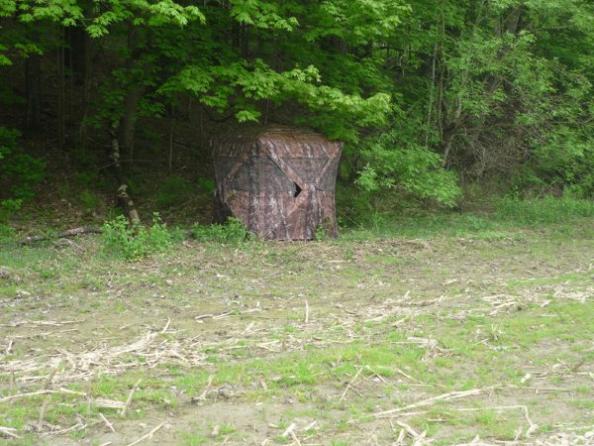 My perspective on luck and Friday the 13th has been changed forever. Having been fortunate enough to fill a couple of spring turkey tags early in the New York and Massachusetts gobbler season, I decided to swap out my shotgun for a recurve on Friday, May 13.

I went to a piece of western Massachusetts property where I was fortunate to have exclusive permission to bowhunt. On my way there I saw a truck parked at a spot where hunters have been known to pull off when they sneak into the property. I was upset but decided to go hunt anyway. I figured that if I ran into the guy, or heard him calling, or heard him shoot, then I would get out of the blind, identify him and report him to the landowner. I had no idea just how terribly wrong my plan would go.

As I set out the hen decoy 8 yards in front of the blind, I heard birds gobbling on the hill right behind me. They sounded like jakes but I could also hear another bird gobbling farther up the ridge. He sounded like a mature tom. I also heard a bunch of hens yelping and cutting from their roosts and it was the most excited and loudest calling I’ve ever heard hens do while still in the trees. If the birds followed their usual pattern, they would fly down and come into the cornfield where I was set up. I was psyched.

A short time later the plan started coming together–I was surrounded by birds. The jakes and hens worked their way off toward the boss gobbler, but when they got to within 50 yards of the tom he turned toward them. At that point they must have decided that they were safer at the far end of the field, so they turned away from the boss gobbler and headed back my way. The jakes came by the front of the blind at a distance of about 50 or 60 yards. Some of them were in half strut and I thought that they may pass by and then circle in toward the decoy. Boy, did things suddenly change!

The first shot was a complete surprise and shock. It sounded so close that I couldn’t even pinpoint where it came from, besides really close. Before I even had time to react and get up off of my seat and out of the blind another shot rang out. This time I heard pellets whiz by the blind and hit the foliage and ground around me. I assumed the shooting was over and I was thinking that I had to get out of the blind and get this guy when another shot went off. This time the pellets hit the side of the blind, passed through it and struck my clothing on my right side (you can see the pellet holes in my blind in the picture below). I clearly remember feeling the pellets hit me in the right shoulder, right hip and right leg. I was in absolute shock–and then a fourth shot rung out. This one sent pellets through the wall of the blind and again, hit me in the right shoulder and thigh area. This time I immediately felt a sting in my right thigh and I knew right away that I’d been hit. I screamed out: “Stop Shooting. You just hit Me!” and thankfully, the shooting stopped. I took a few seconds to check my leg and it looked as if only one pellet had actually punctured the skin on my right thigh and the wound was just bleeding slightly.

I unzipped the door on the blind and looked out toward where the shots had come from. The first thing I saw was FOUR turkeys that were lying dead, or dying, in the field in front of me! I started walking toward the other side of the field and saw a camouflaged hunter come out of the woods and into the field. Then I heard him ask me; “George, is that you?” I recognized the guy as someone who knew that this was private property, who knew that I had permission to be hunting here and that he, did not. He tried to give me some crazy explanation of how he thought he was in a different spot, but it was no use. I knew, and he knew, that he was trespassing. To make matters worse he had walked right under five, multi-colored, No Trespassing signs that were posted on trees over a distance of less than 50 feet. He also shot at the turkeys while he was seated within 10 feet of another No Trespassing sign. The guy then appeared amazed that there were four dead turkeys in the field (remember, he shot four times).

“I didn’t think I hit any of them,” he said. I assured him, in language that I won’t repeat here, that that had hit all four of them and hit me too. I then told him to get off the property. He went over to the four dead turkeys, picked them up and walked out of the field.

I went back to my blind, picked up all of my gear and walked out to my vehicle. Along the way I contemplated what to do. I asked myself if I should turn this guy in or leave it be. Then I reminded myself that this guy made a conscious decision to park his truck down the road and then sneak onto private property. He knew that he wasn’t allowed to be here and the land was clearly posted. Then, he made a conscious decision to shoot four times and kill four turkeys and, in doing so, he could have killed me. That did it for me. I called the Massachusetts Environmental Police to report the incident. As of this writing, they are conducting a full investigation and I’m confident that the evidence and testimony will result in a number of charges being filed.

Was this shooting an accident? Yes, it was. Did another hunter intend to shoot me? I know that he didn’t. But this was an accident that never should have happened. My unlucky (or lucky) stars aligned that morning because someone made a bad choice. That person chose to cross the border from being a legitimate sportsman to a law breaker. Fortunately, my injury was very minor and I returned to the turkey woods the next day. As for the trespasser, I hope he won’t be back in the woods any time soon.