The tom and two hens crossed a recently plowed field and disappeared into the overgrown fenceline. I sat on the... 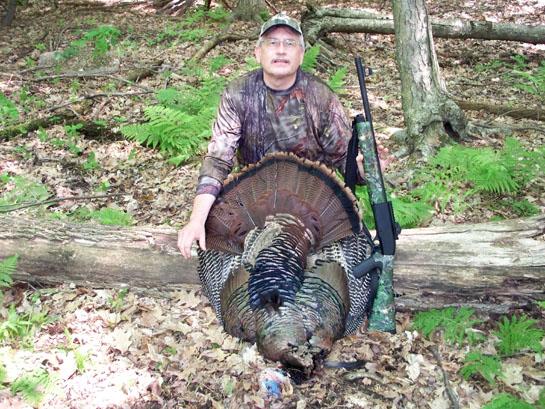 The tom and two hens crossed a recently plowed field and disappeared into the overgrown fenceline. I sat on the other side of the fence line, about 30 yards down, waiting for a chance to fill my tag. The first hen popped out of the weedy brush, quickly followed by the second hen, and the two began to forage among the short grasses. It probably took less than a minute, though it felt like an hour, before the tom poked his head out, glanced to his right and left, and then stepped into the field.

I lined up my open sights on that spot where his neck and body met, and pulled the trigger on my Weatherby SA-459 Turkey gun. The tom hit the ground head first, wings furiously pounding the air for maybe 20 seconds.

New for 2012, Weatherby’s SA-459 is a gas-operated semi-auto with a tactical look to it, thanks to the trim forend and pistol grip-style buttstock. Stock and forend are finished in Mothwing® Spring Mimicry® camouflage pattern that just about disappeared into the Wisconsin spring vegetation. The barrel is 21 ¼” long, and is tipped with a removable, extended ported choke tube (Extra Full). A mil-spec Picatinny rail, LPA-style ghost ring rear sight and blade front sight with fiber optic pin are standard, as are swivel studs fore and aft.

I had three shooting/patterning sessions with my 12-gauge shotgun before I took it to the field. I must admit, though, I was initially leery of that ghost-ring rear sight and high front blade sight. Out of the box, the setup looked awkward, like it would shoot too high, and I was concerned that maybe the barrel was too short for extended range shots.

I was flat wrong! Within a few shells, I was hitting everything I aimed at — at distances ranging from 10 to 35 yards. When I got to the actual patterning, I placed between eight to 18 pellets into the kill zone at every shot, with the average pellet count in the mid-teens. (I was firing 3″ Winchester Extended Range shells loaded with #4 pellets.) The O-ring sight provides an ample rear-aiming platform, and the fiber optic pin shows up wonderfully.

I really appreciate the Weatherby’s pistol grip and bolt handle. The pistol grip helps provide steady aiming and directs a good bit of the recoil into your hand and forearm. The oversized, hourglass bolt handle makes for very easy loading and unloading. I expect this will be a real plus during colder fall turkey hunting when wearing thicker gloves.

Recoil? Very minimal with 2 ¾” loads, but you can certainly feel it with the 3″ loads I settled on for the actual hunting. The kick wasn’t objectionable, and with today’s heavy-duty 3″ turkey shells, there’s simply no way you are going to “design out” every bit of recoil.

There’s one problem with the SA-459: the safety button is too small, and jammed into a tight place at the rear of the trigger guard. With heavier gloves, that button will take some work to find.