Every Day Carry Survival Gear: What’s in Your Pocket?

What gear do you have in your pockets right now? Seriously, what do you have on your person that can... 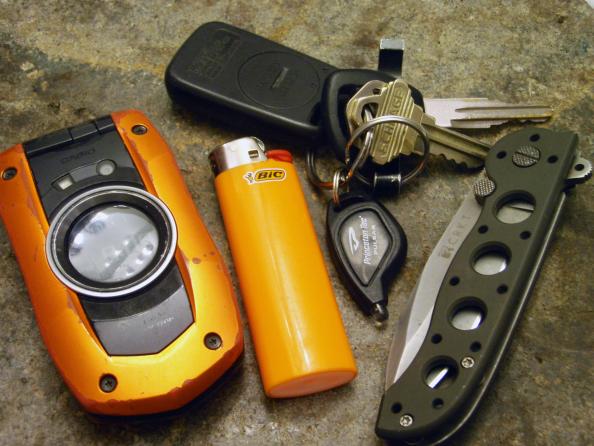 What gear do you have in your pockets right now? Seriously, what do you have on your person that can be used for self-preservation?

The idea behind Every Day Carry gear, also referred to as EDC gear, is to have simple, useful items with you at all times in case of an emergency. It’s not about fear mongering, just some good old common sense. Don’t get caught empty handed.

I always carry my cell phone, the Casio G’z One, which has a built in flashlight and electronic compass. I also have a back-up light on my keychain. I carry a CRKT folding blade knife, and a lighter as well.
It’s a pretty simple recipe, but it gives me a fire source, communications, navigation and two electronic light sources. The lighter serves as a back-up light source. Plus, I can use the keys as saws, the key rings for trap parts and the bottle opener for a much-needed refreshment.

Many people consider a small handgun and an extra clip, as important Every Day Carry equipment. For less lethal options, other people carry pepper spray or a stun gun.

Some savvy urban dwellers, as well as country folk, carry a “Drop Wallet” with them every day. This is a decoy wallet to throw down during attempted muggings and robberies to throw off the attacker. The wallet is real, with a fake credit card and one or two dollars hanging out. This kind of decoy could buy someone a few valuable seconds in a pinch.

I’d love to hear your great ideas, so comment below.