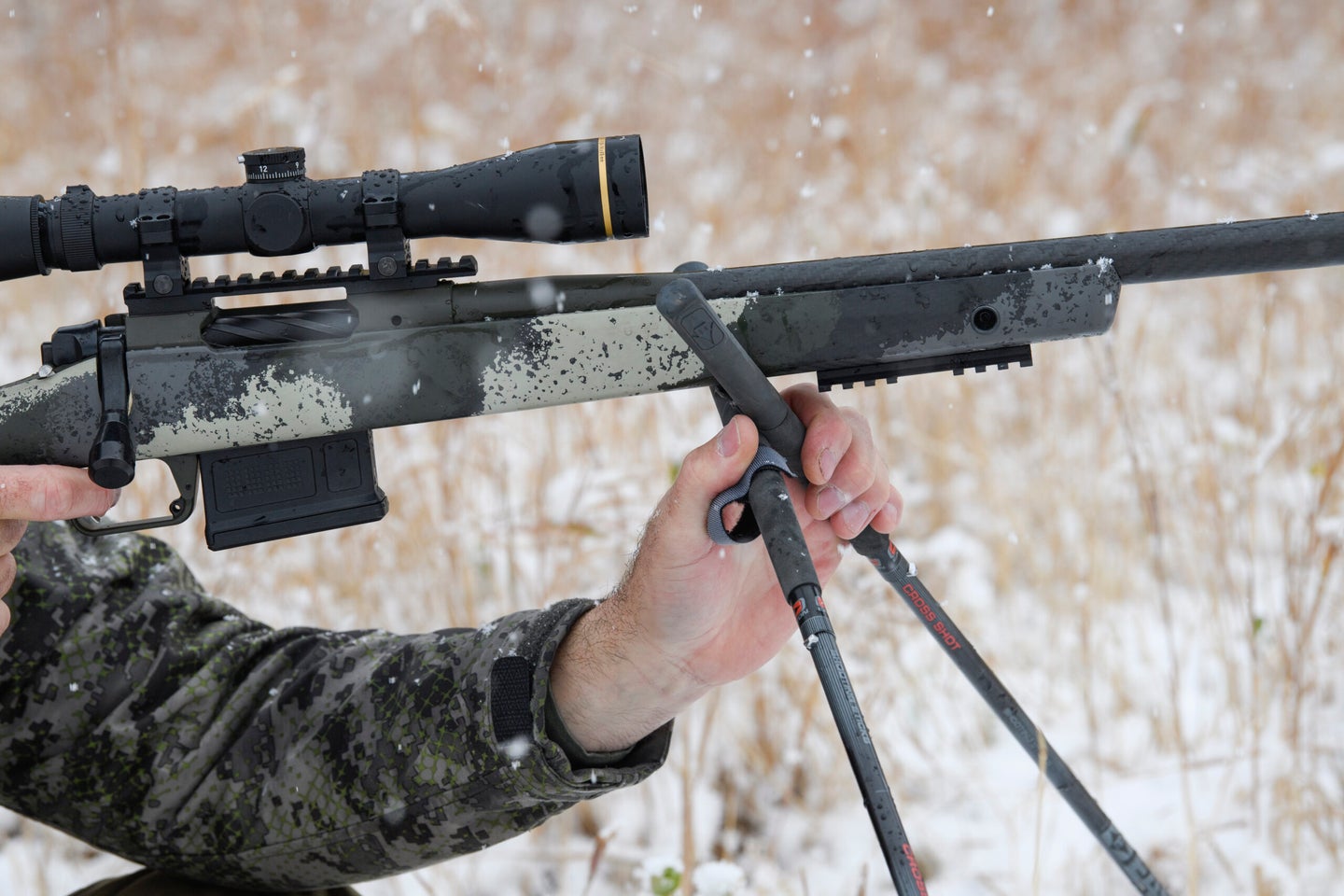 The author rests the fore-end of his Springfield Waypoint on top of the sticks, before snugging the recoil pad into his shoulder. Bill Buckley
SHARE

Whenever I hunt, I carry a pair of shooting sticks; when all else fails, they can help you make a good shot. A bipod doesn’t do you any good if you can’t set up high enough to elevate your muzzle above the surrounding vegetation. And even my go-to shooting support, a Game Changer bag stuffed with lightweight fill, needs something to rest on that gives you a clear shot. In contrast, you’ll almost always be able to use shooting sticks to get a shot from a seated position.

I became a true-believer in the technique many years ago while watching a huge mule deer snake his way through some buck brush in Colorado. My guide and I had ridden mules to the top of a ridge before sunup to glass a draw the deer were using to move between a water hole and their bedding area. We caught sight of one bruiser slipping back to his bedroom at first light.

I set up on a pair of basic shooting sticks, and was able to get steady enough to hit him at just over 400 yards with my 300 WSM, and in the process tagged my first big muley. In that scenario, there wasn’t any other means for me to get sufficiently stable to secure a hit. In other words, if I didn’t have those shooting sticks, I wouldn’t have killed that buck.

The concept behind the technique is simple: Deploy the shooting sticks so that the fore-end of your stock rests on top of them, then put the recoil pad into your shoulder. How far apart you spread the legs of the sticks controls the elevation of your rifle’s muzzle. The wider they are, the lower you’ll shoot; the narrower they’re spread, the more clearance you’ll get.

When setting up the sticks, angle them back toward you a bit so that the rifle wants to naturally fall into your shoulder. If it’s angled the other way, you can end up fighting to keep the stock in your shoulder pocket, making the position less relaxed and less steady.

If possible, place your feet so that your elbows can rest on your knees. This really locks in the rear of the position and can be nearly as steady as shooting prone or off a bench.

Ideally you want to put the softer tissue, located just behind your elbow, on top of your knees. This avoids hard-on-hard contact between elbows and kneecaps.

It can help to angle your legs at about a 45-degree angle with respect to the barrel, but in some positions, you might have to square up directly behind the gun. It all depends on what the terrain dictates.

Another way to get steady is to use your pack as a rear rest. Just hug it into your chest and put it under the bottom of the stock. This technique is like taking a prone position and just raising it a foot off the ground. Done right, it’s rock-solid.

I’ve used this sitting position a lot over the years. When it comes to making a quick, accurate shot in terrain that doesn’t allow you to go prone, it’s the best way to go.