Often relegated to the balloon popping world of a sideshow act or a pivotal scene in an action flick, knife... 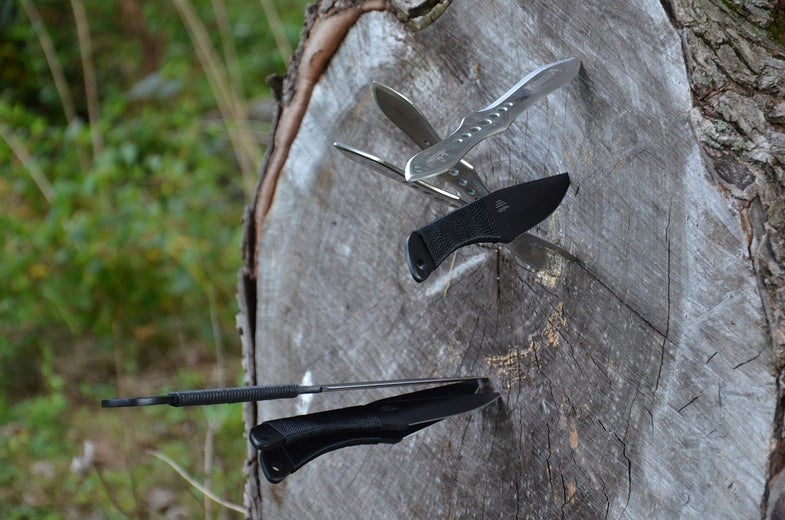 Often relegated to the balloon popping world of a sideshow act or a pivotal scene in an action flick, knife throwing does have a legitimate place in the real world. And while you don’t usually want to “throw away” your weapon, there are times when you might need to throw a knife. From keeping an attacker at bay to skewering a small game animal, there is much that can be accomplished with the art of knife throwing.

For starters, you’ll want to figure out whether you are better at throwing a knife underhand or overhand, and only experience will tell you which method is right for you. Both can work, and both should be practiced, but it makes sense to know where your strengths lie. Select a well-balanced knife, or better yet a set of throwing knives. Spend a few hours practicing to develop your aiming and throwing skills, and then keep going until you become proficient. Every knife throws differently, and range has a great bearing on your throwing, as well. A close-range target might only require a light flick of the knife, while engaging targets at longer distances might require more of a baseball throw.

OVERHAND TECHNIQUE: Grip your knife by the blade, with the knife’s spine (the square edge) against your hand . The best way to explain this grip is to hold the knife tip like you’d hold a pencil. Then, hold the knife up, with the knife handle up by your ear. Take aim at your target, and bring your arm down as if you were swinging a hammer to drive a nail. The timing of the knife release is critical, and after a few minutes, you’ll start to get the hang of it. Pay close attention to the distance from your target, and get a feel for throwing at different distances (5 yards, 8 yards, 10 yards, etc.). It’s also very useful to learn to throw the knife both by the handle and the blade.

UNDERHAND TECHNIQUE: This technique can yield something of a surprise attack, as the knife is often hard to spot when held in a low position. Grip the blade similarly to the overhanded technique, this time holding the knife down by your knee, with the handle pointed toward the ground. Move your arm upward quickly, and release just before your arm lines up with the target.

Try these tips when you’re working on your throw:

Are you a knife or tomahawk thrower? Let us know your tips and tricks, and what you throw, in the comments.