Wouldn’t you sleep better at night in your camp or after a disaster, if you had a little guardian angel... 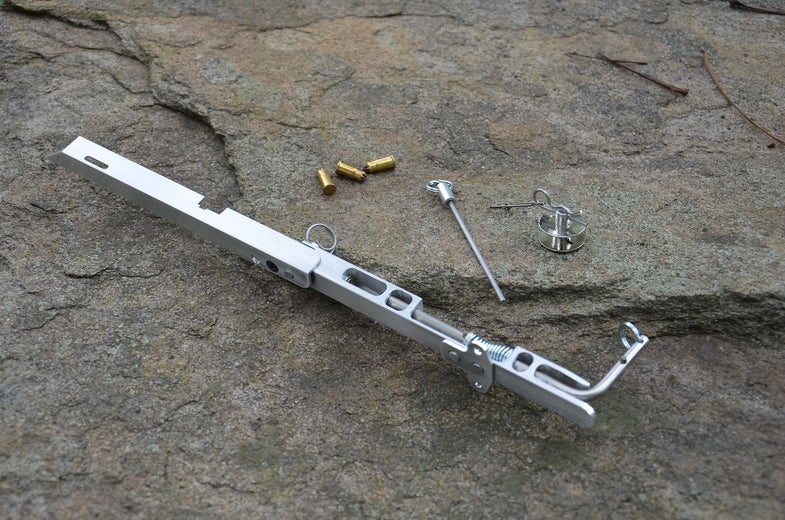 Wouldn’t you sleep better at night in your camp or after a disaster, if you had a little guardian angel watching over you? I know I would. But short of having an actual angel stand guard, what on earth could do this night watchman task? Another person could certainly watch your back, but this isn’t an option if you’re alone or if everyone is exhausted.

Enter the Viking perimeter alarm, a device that fires a .22 blank when the tripwire is hit. A device like this could be useful for a variety of scenarios—if it passes muster. Let’s see

The first pleasant surprise that the Viking tripwire provided was its feather-light weight. At less than three ounces and with a compact size, this device wouldn’t take up much room in a bug out bag or hunting pack. The body of the device is CNC cut from a fine grade of aircraft aluminum, making it light – yet string and corrosion resistant. Open opening the folded device, I found that the movement was smooth and it could be secured in the “stake” position or the “closed” position with a spring loaded pin. A second spring (a much stronger one) drove the firing pin, which could be activated if the trigger were pulled either right or left – a nice feature that allows versatility in the tripwire’s usage. This device is also designed to be a slack tripwire, with no tight lines or cords to catch the eye. And just to keep you from getting into mischief with this device, it will not fire projectile rounds (they won’t fit into the tripwire).

As far as the noise and operation, if you’ve ever used a ram set to drive nails into concrete (or fired a .22), then you know how loud this will be. It’s a brutal shock to the senses, especially if the device fires in the middle of a still night. The second shock from this device was its versatility. This little noisemaker can be driven into the ground like a stake, or screwed to a tree, door jam or other yielding surfaces. Set this up on your backdoor after a power outage knocks down your home alarm system. Use it in a bug out camp to notify you of intruders. And with hunting season upon us, this lightweight perimeter alarm could be a life saver for backcountry hunters. The bears are foraging hard, trying to top off the tank before their winter slumber—and the hunting camps are full of fresh meat.

Here are the specs of the Viking tripwire:

—The high quality body is 6061 aircraft aluminum, with a steel firing pin and breech
—The entire mechanism only weighs 2.4 ounces and it’s collapsible for compact transport
—It’s made in the USA
—The MSRP is $25 for the unpainted model, $29.50 for OD and tan models
—See more options and find out more on the Viking tripwire website

In summation, this brilliant little device packs more punch than you’d expect from a package so small. It can be used at home or in the field, to signal movement or an intruder. And it can be mounted in many ways, to warn of 2 legged or 4 legged ingress. It can also be set up for a silent electronic alarm.

Have you ever wished you’d had a tripwire alarm watching your back at home or in camp? Do you have one of these? Tell us your thoughts by leaving us a comment.