The Mission Sub-1 XR is an American-made compact crossbow that’s built with an ideal blend of speed, accuracy, durability, and aesthetics 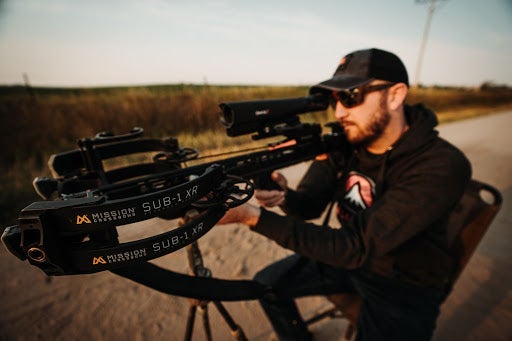 Perhaps the most difficult part about crossbow hunting these days is … well … hunting for a crossbow. The Mission Sub-1 XR should make that hunt a little easier. This is a pro-grade, high performance hunting bow that’s handled everything I’ve thrown at during a year of hard hunting. The crossbow is accurate, fast, and it’s made in America. From the first time I shouldered the Mission Sub-1 XR, it just felt “right.” And there are plenty of additional reasons it has become one of my go-to crossbows.

Crossbow hunters continue to make up one of the fastest growing segments in the hunting community, due in large part to the expansion of crossbow hunting opportunities across the country. We’re far from the days of needing to be retirement age, injured or disabled in order to tote a crossbow for big-game hunting. Crossbows, like the Mission Sub-1, have been legalized for hunting on some level in all but one state—the stubborn outlier being Oregon, which continues to ban crossbows for all hunting. On the flipside, at least 25 states have loosened the reins to permit crossbow usage throughout the duration of regular archery seasons. The remaining states allow crossbows under special seasons or restrictions.

The increased opportunity has supercharged the crossbow market with new models and manufacturers during the past decade to meet the demand. Now you can find a reliable crossbow for virtually any budget, and features are seemingly infinite. But this becomes a double-edged sword.

With dozens of crossbow options—many of which are only slight variations of one another—how do you confidently choose the best crossbow for your needs? I get this question a lot, because my hunting buddies have recognized that I’ve leaned heavily into crossbows. My answer is simple: Get your hands on as many hunting crossbows as possible and shoot them. The horizontal design of crossbows is inherently awkward, especially if you’re transitioning to a wide crossbow from a sleek rifle. Ergonomics will be critical in your decision.

It seems most manufacturers feel the best marketing strategy is to release new crossbow models every year to continually renew the interests of prospective buyers, but this has resulted in incremental innovations, making it difficult for consumers to identify key differentiators. One “new” model might contain all the core features as a previous model, but it will be one inch shorter. Or maybe the stock will have a minor modification. It’s confusing. Clearly, this shock-and-awe marketing strategy hasn’t been adopted by Mission Crossbows.

Mission Archery lives in the same family as Mathews, its compound bow big brother. The father of these two companies, Matt McPherson, is owner, CEO and chief engineer. McPherson has always held a reputation as a leader in the stick-and-string industry. He and his team continue to earn praises with a great blend of meaningful ingenuity and practical performance—manufacturing philosophies that resonate in Mission bows.

There are only three crossbow models in Mission Archery’s current lineup. The Sub-1, released in 2018, is the foundation. The Sub-1 LITE is a lighter-weight model for hunters who count every ounce. At approximately 410 fps, the Sub-1 XR (Extended Range) serves those who demand the fastest crossbows and minimal arrow drop. These variations make sense, as weight and speed are among the top considerations of crossbow consumers.

Core features of the Mission Sub-1 crossbow include multiple proprietary technologies that are present in all models, all of which contribute to the platform’s remarkable accuracy and durable reliability.

Mission’s Benchmark Fire Control system is composed of a match-grade trigger set at 3 pounds. Squeeze this two-stage trigger and you’ll hit a noticeable wall, and then squeeze through to feel a surprisingly clean break. If you let off the trigger in the first stage, it will reset. No different than a rifle, a crisp, consistent trigger in a crossbow is essential for maximizing accuracy, and the Sub-1 trigger is impressively smooth.

The Benchmark system also incorporates a push-button decoking mechanism, making it quiet and painless to disarm the crossbow. Many crossbows still require you to shoot your arrow into a target to unload it, or shoot an eco-friendly disposable arrow into the ground. Mission has eliminated these hassles.

The third component in this system is the easy-load arrow retention arm—it allows the shooter to easily slide the arrow into battery while applying the perfect amount of downward pressure to maintain a secure position and guide the arrow when it’s released.

Speaking of controlled arrow release, the Mission Sub-1 is designed from front to back to launch arrows with minimal friction or interruption from the string or flight deck. This slow-motion video is a great demonstration. Once again, this contributes to the extended-range accuracy found throughout the Sub-1 platform.

My first introduction to the Mission Sub-1 XR crossbow was at the 2019 SHOT Show at a noisy, windy shooting range in the Nevada desert. With a cacophony of gunfire reporting in the background, I was waved over to the Mission crossbows booth to shoot the XR. Small balloons were inflated and pinned to a hay bale 100 yards downrange. A stiff 30 mph January breeze made it difficult to hold a conversation—let alone, shoot a crossbow. Or so I thought. I popped a balloon on my first shot.

Holding the XR for the first time, the first thing I noticed was its professional appearance and rock-solid feel in my hand. Unlike many other crossbows, it didn’t feel like a plastic toy. No parts were loose or rattling, and the aluminum stock resembled more of a refined tactical crossbow style than a deer hunter’s arrow-slinger. The pistol grip is compatible with any AR-style grip, so you can customize the XR to match the feel of your favorite black gun. Oh, and length of pull and comb height are adjustable with a turn of some Allen screws. A proper-fitting crossbow is an important step toward achieving maximum accuracy, and it also makes it much easier to mount your optic of choice.

Fast-forward nine months and I found myself en route to Kansas for an early-season muzzleloader whitetail hunt. I planned to shoot a big buck with my smokepole and then make some meat with the Mission Sub-1 crossbow if the opportunity presented itself. My high hopes came to fruition.

After lucking into a 150-class September buck in a 90-degree heat wave, I had plenty of time to tinker with my new crossbow before attempting to shoot a doe in the short window of cool air the following morning. In no time, I was dialed-in and deadly comfortable shooting out to 60 yards. I was reminded of a valuable lesson during this sight-in session: Fixed-blade broadheads can plane at extended distances. My fixed blades were steering off target beyond 40 yards, so I went with mechanical heads. Always test your broadheads on target at all planned hunting distances to verify point of impact.

While shooting dozens of arrows on the range, I noticed two other attributes of the XR that tripped my trigger. First, it has very little recoil. For those of you new to crossbows, yes, indeed, they do have enough energy to create recoil. The XR is slightly heavier than the plain Mission Sub-1, so that definitely aids in thwarting recoil. Second, it’s quiet. I haven’t tested it with a decibel meter, but anecdotally I can say it’s on the quite side of all the crossbows I’ve shot.

The following morning, after watching a pile of deer moving back to bed at dawn, a mature doe finally came close enough. At 40 yards, I loosed an arrow from the XR and the doe wheeled into a brushy field edge. She didn’t go far. I was filming this hunt, and in reviewing the footage to see the arrow impact before trailing the doe, I thought I had missed. I couldn’t see the arrow in flight. I couldn’t see the impact either. Later, I learned that’s standard when you’re shooting a screaming-fast crossbow without a lighted nock.

Since then, I’ve taken several more whitetails, a turkey, and a velvet mule deer with my Mission Sub-1 XR, and its retirement is nowhere in sight. I’ve hunted with this crossbow in temperatures ranging from the mid-90s to well below zero, in rain and snow, and I’ve never encountered performance issues.

What this Mission Crossbow Does Best

I’m a minimalist. Now, that doesn’t mean I’m a Luddite—I openly accept new tech and designs if they’re functional and not simply eye candy. For example, lately I’ve been topping my crossbows with a Burris Oracle X rangefinding scope, which is more akin to the Death Star than the deer stand. Mission Archery has done an excellent job of packing the Mission Sub-1 XR full of meaningful ingenuity without any clumsiness or overkill.

The draw cycle in the XR, whether cocking or decocking, is very smooth. You’ll certainly notice the 80-percent letoff when you’re pulling it into action. This is wonderful for any shooters who haven’t eaten enough spinach, and for anyone when it comes to loading and unloading the crossbow in treestands or tight quarters. If you need even more draw support, look to Mission’s Removable Silent Draw (RSD) cocking device. The decocking system is fast and simple (just watch this video).

What this Mission Crossbow Does Worst

Relative to other hunting crossbows with similar specs, the Mission Sub-1 XR leans just slightly on the pricier side. However, it’s important to remember that the MSRP is an unfair gauge of true market price. At the time of this crossbow review, several online retailers offer the Sub-1 XR with the Pro Kit (Hawke XB-1 illuminated scope, three arrows, quiver, rope cocker, rail lube, and soft case) for $1,799, which is $100 less than MSRP. Uncocked, the profile of this crossbow is a hair bulkier than competing models in a similar price range, but in my experience hunting from a variety of stands and blinds, and spotting and stalking, the difference is negligible.

Does the Mission Sub-1 XR Accomplish Its Mission?

For a compact, speedy crossbow with a look and feel that reflects its made-in-America quality, the Mission Sub-1 XR is a damned fine specimen. The build of this hunting bow is what I would classify as “pro-grade.” It will handle the whitetail woods and take on prairie beasts with ease, but I also wouldn’t hesitate to haul the Sub-1 XR into the mountains for the most rugged big-game hunts imaginable.