Review: The Garmin Instinct Solar 2 Series Is a Rugged, Customizable Smartwatch with an “Unlimited” Battery Life 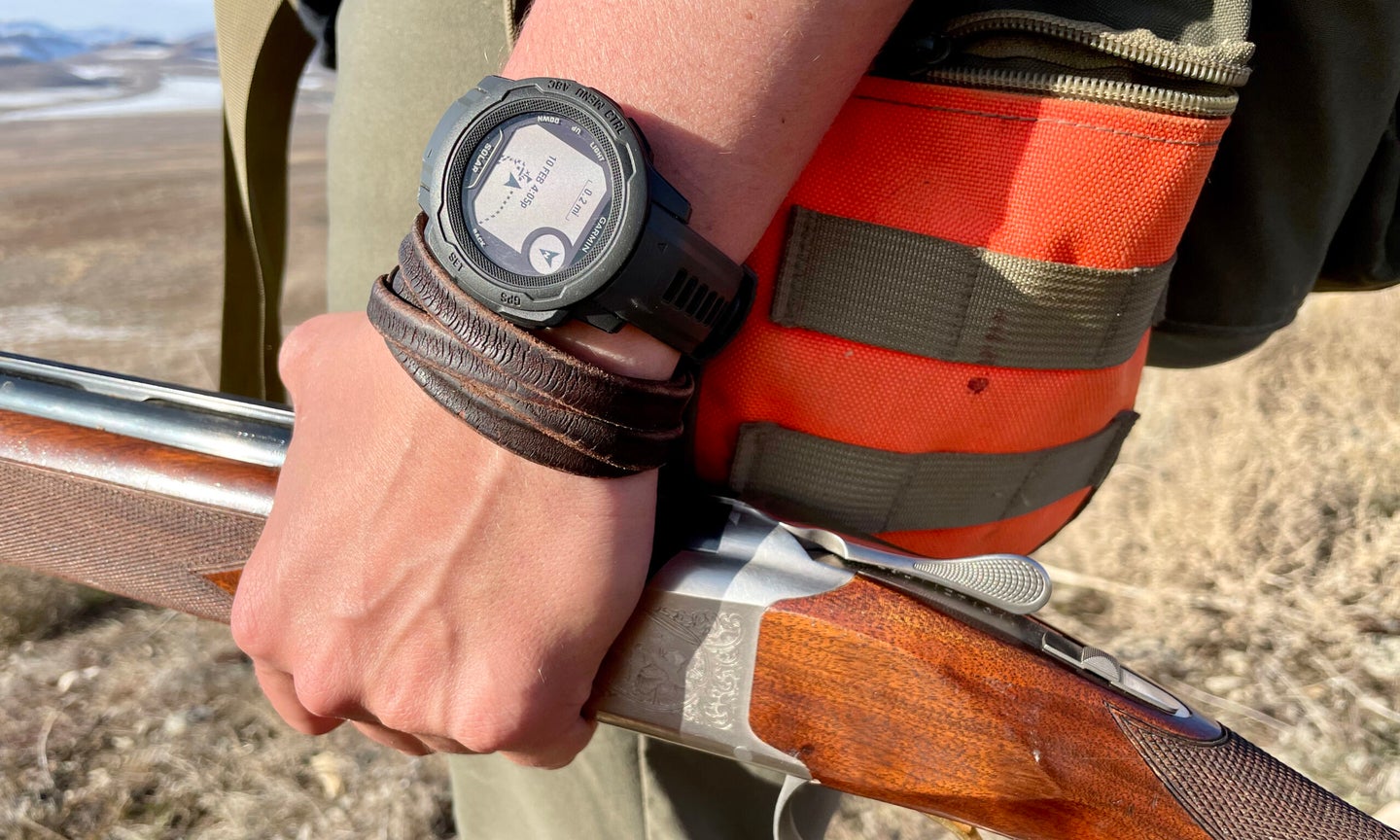 The Garmin Instinct 2S Solar is a lightweight, low-profile smartwatch for all kinds of hunters, but particularly those navigating new terrain and rough country. The author tested the 2S Solar on a late-season wild chukar hunt. Natalie Krebs
SHARE

I’ve said it before, and I’ll say it again: GPS smartwatches are one of the most useful tools outdoorsmen have at their disposal. Although we’ve historically dismissed them as products for the fitness-obsessed, they’re gaining traction among the hunting, fishing, and shooting crowd. And for good reason. GPS pairing, stand-alone navigation modes, environmental widgets, and yeah, health and wellness stats help hunters tackle everything from training for tough hunts to finding our way back to camp. At least that’s how I’ve been using my first-generation Garmin Instinct Solar watch for nearly two years now, and how I’m using the new Garmin Instinct 2S Solar that just dropped.

The Instinct was introduced in 2018, and it just got a reboot with today’s launch of the Garmin Instinct 2 Series. The new lineup includes standard and solar options, a (mostly) longer battery life, beefed-up health and wellness features, and a smaller size option (the 2S) that holds appeal for anyone with a slimmer wrist or in the market for a lower-profile smartwatch. This review is based on my experience with the Instinct 2S Solar watch, but many of the guts and specs are identical between the two sizes.

Specs and Features of the Garmin Instinct 2 Series

The non-solar models start at $350, while the more feature-rich Tactical, Surf, and Dezl solar models will run you $500. The model I tested, the 40mm Instinct 2S Solar, will run you $450, and so will the standard-sized 45mm Instinct 2 Solar. There is no price difference between sizes of the same model type.

Testing in the Field

Many of the Instinct 2 Series features that are most useful to hunters, anglers, and other outdoor enthusiasts are the same ones that the first-gen watch was built around. The new Instinct still offers GPS features like Track Me, and will pair with an inReach device and Garmin’s dog trackers. I tracked a trail run using both my gen-one Instinct Solar and the new 2S Solar to track a trail run, with identical tracking results.

You’ll also find the same handy widgets like sunrise and sunset times, moon phase, weather, barometer, and more, although accessing some of these is slightly different on the 2S as many have moved from the top left “Control” button to the bottom left “ABC” button (which is short for “Altimeter, Barometer, Compass”).

One of the more notable options in this lineup is the 2S offering, which is a smaller-profile Instinct designed for anyone with a slimmer wrist. It’s a great option for many women and young adults, or anyone who’s not into a beefy display on their wrist. I’m bigger (5 foot 8) than the average American woman (5 foot 4), so I never really minded the 45mm Instinct after a few days. I wear it around the clock—in the shower, while I’m sleeping, when I go out to dinner

While the first-gen Instinct Series came preloaded with dozens of activities, the Instinct 2 lets you choose the activities you add to your watch. So instead of scrolling through 10 activities I never do (Treadmill, Bike, Mountain Bike, Pool Swim, Yoga…) just to reach the Hunt activity, I’m able to select the ones I want in the app, and they’ll appear on my watch. I can even select favorites (Hunt, Trail Run, Track Me) they will appear right at the top of the GPS menu. If I need to add more activities on the fly, I don’t even have to use the app. I can just scroll to the bottom of the GPS list and select “Add” to choose from the full list of activities

I also experimented with the Garmin Connect IQ app, which allows you to add custom apps and widgets to your watch. This is standard across Garmin smartwatches and isn’t new to the 2 Series, but it levels up your customization options and is worth checking out. You can add everything from wind direction to pregnancy trackers. Garmin also lets you customize the appearance of the Instinct 2 and 2S Series here.

One of the biggest additions to the Instinct 2 Series is Garmin’s full collection of “wellness features,” which track personal health and habit data. This upgrade was made possible by incorporating the same optical sensor that’s used in the new Fenix 7 line, and by leveraging the analytical capabilities of Firstbeat Analytics, a physiological metrics company that Garmin acquired in 2020. Many of these new wellness features will appeal to the fitness-focused crowd who live to work out, but they’re also handy for folks who are setting specific goals. Maybe you’re training for a Western hunt at altitude; suddenly the VO2 Max and Recovery Time features become important. The full suite now available in the Instinct 2 Series includes VO2 Max, Fitness Age, Training Status/Load/Effect, Recovery Time, HIIT Workouts, and Daily Suggested Workout.

For data nerds, the Instinct 2’s sleep tracking is even more robust. I managed 8 hours and 50 minutes of sleep one night this weekend, which my 2S declared “long and refreshing REM sleep,” with a quality score of 88 out of 100. As someone who needs nine hours of sleep and only budgets for six, this function helps remind me to hit the hay when I should.

Like the increasingly popular Apple Pay, Garmin has also added Garmin Pay to the Instinct 2, which is accepted most places that allow for contactless credit card and app payments. (Garmin Pay doesn’t accept AmEx.) So far I’ve used mine to quickly pay for a tank of gas instead of having to fish out a credit card. Because Garmin Pay is password protected—you enter a quick four digit code—it probably took the same amount of time. That said, it’s nice to have a backup payment system if I forget my wallet at home or want to grab coffee when my wallet’s zipped into my shirt and buried under three layers of camo.

If you want a smartwatch with a touchscreen, keep shopping. I happen to like the five button navigation on the Instinct. I wore a Shark digital watch (complete with velcro band) as a kid, and the 2S Solar’s buttons are a lot more intuitive than the scaled-back buttons on other smartwatches. More importantly, buttons are more useful than a touchscreen for many applications. I’m usually wearing gloves when I’m hunting, which make it impossible to check legal light or the weather forecast on a touchscreen.

If the Instinct 2 Solar is anything like the first-gen watch, it’ll hold up to years of abuse. I’m hard on my gear, and anything that can get scratched, dented, busted, or broken usually does. The 2 Series is military rated for thermal, shock, and water resistance, and although I’ll need months to confirm the 2S Solar will hold up, I did some moderate durability testing in the meantime. I submerged my Instinct in water for 60 minutes, dropped it (bezel-side down) onto concrete from 10 feet, and buried it in fine dirt. It sustained a tiny (1mm) scuff where the wristband meets the housing, but that’s an admittedly aggressive test for a product that’s normally secured to your wrist. While I have scraped my first-gen against rough rocks on Western hunts, I’m more likely to slam my arm against a door or wall while I’m rushing around the house. And the 2S has held up just fine to that so far.

After three days of using the 2S Solar with light GPS usage (15 minutes) and light solar exposure (2 hours at 100 percent intensity), the watch was already down to a three-day battery life. Enabling battery saver mode did stretch that to 38 days, but doing so essentially turns the Instinct 2 into a regular digital watch. Don’t get me wrong: It’s helpful to have a suite of battery-management options (customizable battery saver, toggling on/off battery-sucking functions like PulseOx, etc.), but if you’re in the market for a GPS smartwatch, it’s because you plan on using those features regularly.

At the same time, this battery battle isn’t a Garmin-specific issue. Active GPS tracking gobbles battery life in any smartwatch. So it’s better to focus on the functions you want and simply accept that you’ll need to charge your watch occasionally.

Garmin didn’t make any missteps with the Instinct 2 Series that I’ve been able to find so far, but users will have to decide which features are most important to them. If the slimmer 2S Solar is a priority for you, then you should expect to charge your Instinct more often than the 2 Solar using the USB cable. I initially wondered if powering a smaller display might improve the 2 Solar’s battery life but, as the engineers at Garmin pointed out, the functions on each device still require the same amount of juice. And with its smaller screen, the Instinct 2S Solar is less capable of harvesting solar energy.

It would also be nice if Garmin added a solar model to its Camo lineup down the line, since the folks who wear camo are likely to want those two features rolled into one smartwatch.

The I wasn’t about to test out the most exciting new development in the 2S Series because I’ve been using the 40mm 2S Solar, but the theoretical “unlimited” battery life of the 45mm Instinct 2 Solar watch is intriguing. Given how rarely I have to charge my first-gen Instinct Solar (about every two weeks in the winter), I could see a Florida fishing guide or an Arizona bird hunter go months without needing to charge their 2S Solar.

There’s a lot to love about the new Instinct 2 Series, but much of what the watch appears to do best is what it’s always done: It’s a low-maintenance, feature-rich, durable smartwatch for anyone who spends lots of time outside.

The 2 Series upgrades should broaden the Instinct’s appeal. Many women, young adults, and anyone else with a slimmer wrist will appreciate the Instinct 2S model. The longer battery life, particularly in the 45mm Solar option, should be attractive to any outdoor recreator who wants a rugged, low maintenance smartwatch. The new suite of high-demand health and fitness options should appeal to anyone who is focusing on their fitness or training for a hunt.

I’ve been wearing and relying on the Garmin Instinct Solar for nearly two years now, and even testing higher-priced smartwatches from other manufacturers hasn’t convinced me to swap it out. But I’ve got no qualms upgrading to the Instinct 2S Solar.