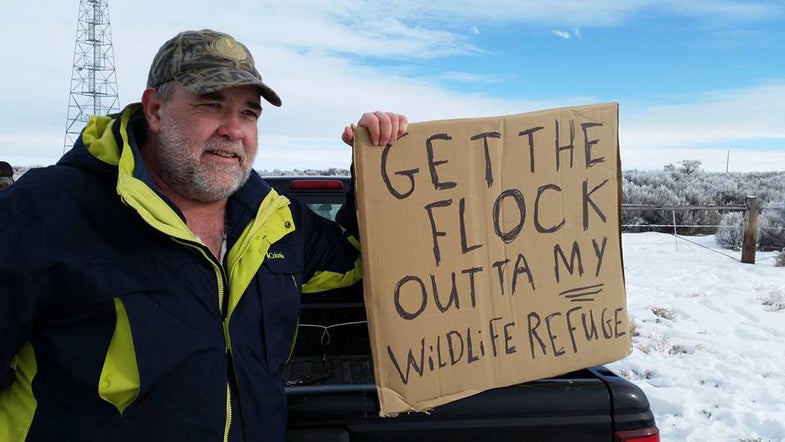 I was celebrating Teddy Roosevelt’s birthday yesterday in a way that TR might have appreciated—hunting Montana grouse on BLM land—when my phone lit up.

“Bundys get off!” said one message.

“WTF? The Oregon refuge occupiers are found not guilty!?!”

When I got back to my pickup – two rusty-plumed public-land Hungarian partridges in my game belt – I turned on the radio, and the news confirmed it: the armed occupiers of the Malheur National Wildlife Refuge had been found not guilty by an Oregon jury of charges of conspiracy and related assertions that they had used weapons to prevent federal workers from doing their job.

It seemed to me that the jury had missed what the rest of the nation had seen back in January, that brothers Ammon and Ryan Bundy and a group of fellow public-land activists, armed with rifles, had taken over the refuge offices in remote southeastern Oregon. The U.S. Fish and Wildlife Service employees who manage the refuge had vacated the premises, presumably because they felt intimidated by the ruffians. The armed standoff lasted six weeks.

But the jury, persuaded by defense attorneys that the Bundys (and 5 of their fellow insurgents) were expressing their constitutional rights to protest and to carry firearms, found them not guilty of federal charges. News accounts were quick to note that the Bundy brothers still face federal charges surrounding a similar standoff in Nevada. But commentators were equally quick to note that the Oregon acquittal is an important precedent that is likely to fuel similar actions elsewhere by activists who think the federal government manages too much public land in the West, has overreached its authority, and that the land should be redistributed to states and counties. It would also seem to indemnify those activists who use violence and the threat of violence over more restrained and respectful forms of protest.

My head was still shaking when I returned to the house. After cleaning the birds, I called Mark Heckert for his perspective. Heckert, from Puyallup, Washington, had come to my attention in January when he tore down a tarp covering the Malheur Refuge sign.

“What does this acquittal mean?” I asked Heckert.

“It means it’s open season on public land. If you want it bad enough, you can get it. Just pick up a weapon.

“It’s a really sad day for conservation and for the people who love public lands. I don’t know how else to process this. I was out there for a couple days in January, and I saw them take that refuge at the barrel of a gun. My real fear is that this will embolden those who think there should be no public land. They’re going to go after our lands harder and faster, and if the government doesn’t defend this, we will lose our public land. You can guarantee that. This is the leading edge of a movement.

“The jury didn’t see these guys as the rabble-rousers that the rest of us who were out there at Malheur saw. They ruled on a narrow legal opinion. They didn’t see what we did, that these guys invaded a federal facility behind guns. This was an act of domestic terrorism.

“In an odd way, though, this is a sort of rebuke to these bullies. They expected the big, bad old government to come down hard on them. But the government turned out to be way more reasonable than [the protesters]. The government said you are entitled to protest. That’s the only good thing about this, that it confirmed that the government might not be the bad guy, that they will tolerate protests like this.

“But I worry that this is just the start. These guys [the Bundys] think that all this land is going to be distributed to citizens—you know, 160 acres and a mule. That’s not what’s going to happen. These guys are useful idiots to the big powers that want to get their hands on our public lands. They are going to create a climate where our public lands are commodities that can be sold and traded. When’s the last time you saw the little guy come out ahead in commodity trading?

“How am I going to process this? I’m going down to the Nisqually [National Wildlife] Refuge tomorrow and I’m going to pass out leaflets to people that say that if you love this place you need to speak up. Because if you don’t get involved, then these guys are going to take this away from you.”