Zinke Plays Coy with Monuments Review Interior Secretary Ryan Zinke has said he will recommend trimming the boundaries of a... 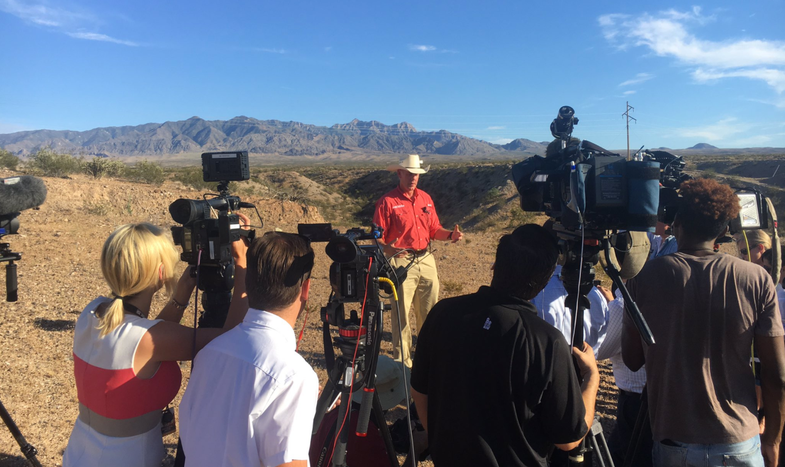 Interior Secretary Ryan Zinke talks to the press during his tour of national monuments in July. Twitter
SHARE

Interior Secretary Ryan Zinke has said he will recommend trimming the boundaries of a “handful” of national monuments, but doesn’t want to eliminate any altogether. That’s about all he has said in public so far about the fate of America’s national monuments.

Exactly what is a “handful” of monuments and which ones they are, remains open for speculation. National monuments are a special designation of public land. Under the Antiquities Act, the President has the authority to identify and create special management plans for public lands with outstanding cultural significance.

Theodore Roosevelt signed the Antiquities Act into law and promptly used it to protect 800,000 acres of Arizona’s Grand Canyon. Ever since, some politicians have complained that the law gives too much power to the President.

Zinke used much of his first months in office to review 27 of the most recently defined monuments. Today he handed his recommendations to President Trump, but declined to offer details of which monuments he wants to see trimmed. Some conservationists have speculated he will target the Grand Staircase-Escalante and Bears Ears Monuments in Utah, two relatively large areas rich with Native American lore and artifacts in Utah, set aside by Presidents Clinton and Obama. Earlier this summer, Zinke said he would leave certain monuments alone, such as the Upper Missouri River Breaks in Montana. While monument status does not preclude hunting and fishing, it can protect habitat from industrial development, such as oil and gas.

“These are our public lands, and the public deserves to know what the administration plans to do with them,” says Whit Fosburgh, president and CEO of the Theodore Roosevelt Conservation Partnership. “These recommendations have the potential to impact the future of world-class hunting and fishing on some of America’s finest public lands and set a precedent for the future status of all national monuments …but we won’t know until the results of this public process are made public.”

Federal prosecutors got another rebuke from jurors in Nevada, as authorities failed to prosecute men who they say conspired to intimidate Bureau of Land Management rangers from rounding up cattle grazing illegally on federal land.

The case of the Bundy Family has become a rallying point for critics of the federal government. Cliven Bundy, owns a ranch near Bunkerville, Nevada, where he grazed his cattle on public range land. In a long-running dispute with the BLM, a judge determined Bundy owed the government $1 million in unpaid grazing fees. That prompted the BLM to try to round up those cows, but they were prevented from doing so by armed Bundy supporters in 2014.

Prosecutors have had a mixed bag so far in court, but on Aug. 22, juries refused to convict four men who faced 10 charges related to the standoff.

According to the Los Angeles Times: A Las Vegas jury acquitted two of the four men on trial, Ricky Lovelien and Steven Stewart, on all 10 charges against them.

The jury found the other two defendants, Scott Drexler and Eric Parker, not guilty on most charges, but it could not reach verdicts on four charges against Parker and two charges against Drexler.

Meanwhile, Cliven Bundy and his sons remain in prison awaiting their own day in court over the armed standoff.

Oregon Gov. Kate Brown this month closed out years of debate and uncertainty surrounding the fate of the 82,000-acre Elliott State Forest. Brown signed a bill keeping the land in state hands, but shielding it from the pressure of legal mandates that it generate maximum revenue for state schools.

The forest is Oregon’s oldest state forest. As school trust land, the state had a legal mandate to use the land to generate money for schools. Traditionally, that meant logging. But given legal and economic challenges to logging, the state lost money on the Elliott. That triggered a lengthy process to review and sell the land. Recreationists, including hunters and anglers, protested the privatization of that land, fearing it would lead to lost access.

Oregon Sen. Arnie Roblan of Coos Bay, introduced SB 847 to spare the Elliott and buy more time to come up with a viable management plan. Roblan’s bill, S.B. 847, transfers ownership of the Elliott from the school trust fund to an alternative state land management entity that does not have the same fiscal mandate. That bill passed the Oregon Legislature and was signed into law by Gov. Brown earlier this month.

While the new law removes the immediate pressure on the Elliott State Forest it does not dictate how the forest should be managed in the future. Expect healthy and vigorous debate on that topic in months to come.

“Oregon hunters, anglers and public land owners appreciate the leadership shown by Sen. Roblan and Gov. Brown,” said Backcountry Hunters and Anglers Northwest Coordinator Jesse Salsberry. “Though we know that more work remains, we are happy to see that progress continues to be made to keep the Elliott accessible and in public hands.”