Clinton v. Trump: ‘The Second Amendment is on the Ballot’

Trump has been succinct in addressing gun-owners’ rights. Basically, he opposes everything Clinton proposes. 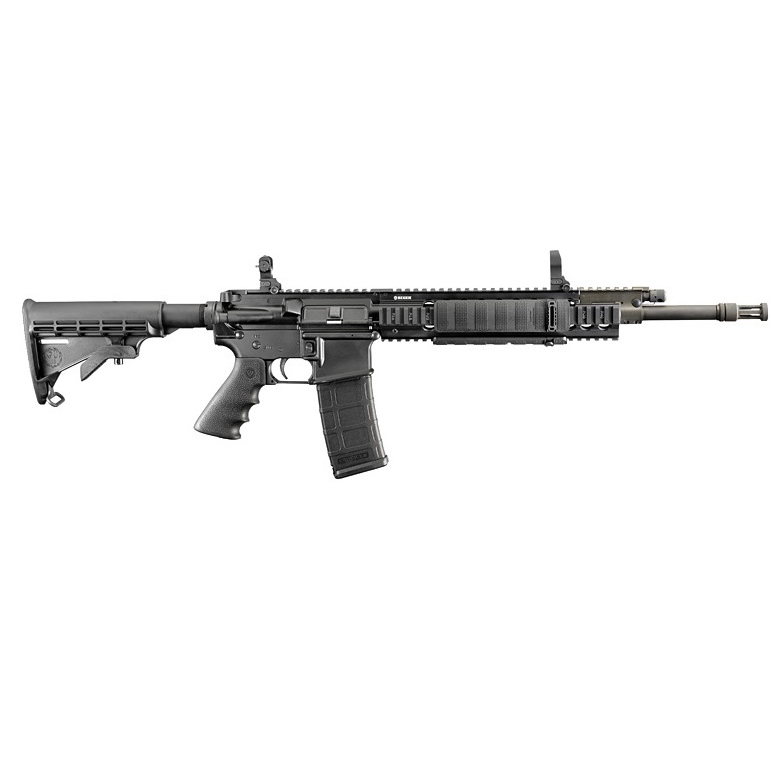 With gun-owners’ rights vs. gun control a front-and-center clash in a Presidential election for the first time since 2000, the differences between Democrat Hillary Clinton and Republican Donald Trump are so stark that November’s outcome could serve as a referendum on the future of firearms regulation.

If Clinton wins, it will be a turning point for the anti-gun lobby — a circumstance unimaginable in 2012 — and an endorsement of her plan to pursue legislative, litigative, and administrative gun-control initiatives.

If Trump wins, it will serve as a defeat for the gun-control lobby, since preserving Second Amendment rights is pivotal part of his campaign. In fact, as he told the NRA in May, “The Second Amendment is on the ballot in November.”

Clinton has been explicit in detailing her gun-control agenda, which features a nine-point plan. Trump, on the other hand, has been succinct in addressing gun-owners’ rights. Basically, he opposes everything Clinton proposes.

Before examining specifics of their proposals, it is important to discuss who they’ve tabbed as prospective Attorney Generals and potential nominees to the Supreme Court.

Clinton has indicated she may retain current Attorney General Loretta Lynch to run the Justice Department, which includes the BATFE which, under Clinton, would have expanded powers. Lynch succeeded Eric Holder Jr. in April 2015 and, like her predecessor, is a gun-control adherent who would likely support Clinton’s agenda.

Trump has named South Carolina Rep. Trey Gowdy as his likely Attorney General. Gowdy is pro-Second Amendment and openly critical of federal bureaucracies. He’d be more likely to trim the regulatory reach of BATFE than expand them and has challenged the legality of preemptively denying those on the secret “terrorist watch lists” their Second Amendment rights.

In the wake of chief justice Antonin Scalia’s death in February, Obama nominated Merrick Garland, the Chief Judge of the U.S. Court of Appeals for the D.C. Circuit, to succeed him. While not necessarily Second Amendment friendly, Garland is regarded as moderate who many Republicans say they’d endorse. The Senate, however, has not staged confirmation hearings so it appears the next President can nominate his or her own candidate.

The good news is Clinton has said Congress should confirm Garland, and there is speculation she would nominate him as well. The bad news is she hasn’t discussed Garland in months and may wish to install someone more liberal.

Others Clinton is allegedly considering include anti-gun justices such as Sri Srinivasan, of the D.C. Circuit Court; Jane Kelly, of the Eighth Circuit Court; Paul Watford of the 9th Circuit Court; Jacqueline Nguyen of the 9th Circuit Court. All have a history of hostility to gun-owners’ rights, particularly Watford and Nguyen, who recently voted to retain California’s “may issue” scheme in requiring concealed carry permit applicants to explain why they want to exercise a Constitutional right. That case, Peruta v. San Diego County, may be the next gun-rights’ case to go before the Supreme Court.

According to his campaign website, Trump has engaged the conservative Heritage Foundation to build a list of “red-meat conservatives” for him. The list includes: Steven Colloton of Iowa, Allison Eid of Colorado, Raymond Gruender of Missouri, Thomas Hardiman of Pennsylvania, Raymond Kethledge of Michigan, Joan Larsen of Michigan, Thomas Lee of Utah, William Pryor of Alabama, David Stras of Minnesota, Diane Sykes of Wisconsin and Don Willett of Texas.

While discussion is focused on replacing Scalia, Justice Ruth Bader Ginsburg, 83, and Justice Anthony Kennedy, 80, both liberals, may retire in the next few years, meaning the next President could, potentially, appoint at least three justices.

And then there is this: As of Oct. 4, 12 of 179 U.S, circuit court judgeships were vacant and at least 77 — or 11.5 percent — of 673 U.S. district court judgeships were unfilled. While the Supreme Court hears about 80 cases a year, the 13 U.S. circuit courts handle more than 30,000 cases annually and it is their rulings — such as the 9th Circuit Court’s decision in Peruta v. San Diego County — that are often the final word on Constitutional law, or the final step in getting a case before the Supreme Court.

So, not only will the next President have the immediate opportunity to change the dynamics of the Supreme Court, but to stock the bench with nominees who could shape the ideological course of the federal judiciary for decades.

Clinton’s emphasis on gun control as a campaign issue is a calculated gamble that voters will respond after more than a decade of Democrats taking a “hands off” posture. Since unveiling her nine-point plan in October, she has not wavered in her contention that Americans support “common sense” gun-control measures.

If Clinton’s initiatives were implemented, NRA executive vice president Wayne LaPierre warns gun-owners, “You can kiss your guns goodbye.” Clinton maintains her proposals do not diminish an individual’s fundamental right to own a personal firearm and do not imperil the Second Amendment.

Clinton has capitalized on the myth that gun stores are “flooding our communities with illegal guns” making it imperative that the nation’s 140,000 Federal Firearms Licensed dealers be aggressively monitored, inspected and vetted.

Clinton proposes to dramatically increase BATFE funding and resources, including appointing the first director to manage the agency since 2006. Her campaign maintains that because BATFE has been underfunded, 58 percent of the nation’s gun stores have not been inspected in the last five years.

Under this scheme, BATFE will have extensive rule-making capacities to implement back-door gun control measures, which can also be added through executive actions by the President.

Obama imposed 32 gun-related executive actions during his presidency, a trend Clinton will continue by evoking “the executive power of the presidency to further gun restrictions that would have little chance of becoming law.” A beefed-up BATFE would be the ideal agency to enforce such executive actions.

2) Lobby for universal background checks on all firearm transactions

While this would require legislation, Clinton doesn’t want to trot out the same flawed universal background check bills stagnating in the House and Senate. Her goal is to redefine who qualifies as a gun dealer to mandate broader FFL application. She isn’t promising to uphold existing rules, but to alter them.

If adopted, Clinton’s proposal would create a registry of all legally, privately owned firearms in the U.S. While gun confiscation is dismissed as paranoia, the bottom line is it would establish a tool for doing just that.

The only loophole here is in the logic of these proposals.

The gun show and Internet sales “loopholes” are gun-control fantasies. Federal law requires anyone in the business of selling guns to perform a background check every time they sell a gun, regardless where they sell it. Of course, if you redefine who qualifies as someone “in the business of selling guns,” then it’s not about enforcing existing laws but about changing laws to broaden their scope. Unless that happens, Clinton can’t act on this proposal because it already is federal law.

Closing the so-called “Charleston loophole” may have merit. Right now, a gun sale can proceed without a completed background check if that check is not finished in three days. Extending the window by a few days is not much of an imposition. This would require Congressional legislation as a Brady Bill amendment.

4) Repeal the Protection of Lawful Commerce in Arms Act (PLCAA)

Clinton claims America’s firearms industry enjoys a “special immunity.” That is nonsense. Like other manufacturers, there is no “special immunity” that prevents lawsuits against them if they sell defective products or conduct business illegally.

Clinton proposes the firearms industry should be financially responsible for harm caused by criminal or negligent misuse of their products. She would need legislation from Congress to overturn the PLCAA.

5) Expand the definition of ‘domestic abusers’

The Lautenberg Amendment prohibits those convicted of felony domestic abuse from owning guns. Clinton wants to broaden the definition of domestic abusers to include those cited for misdemeanor stalking and preemptively require those accused of domestic abuse to turn in their firearms.

This would require Congress to approve legislation. Several bills now in circulation propose to do this.

Lying on Form 4473 is a federal felony punishable by up to 10 years in prison. So this makes little sense unless rules and definitions are broadened to incorporate transactions now regarded as private exchanges between individuals.

7) Keep firearms out of the hands of the mentally ill

Clinton wants to preemptively deny those under court orders to receive out-patient mental health treatment their right to purchase or possess firearms. This rule-making tweak has already caused Social Security recipients and military veterans to have their Second Amendment rights revoked because they were deemed incapable of managing their finances.

Sen. John Cornyn’s (R-Texas) Mental Health and Safe Communities Act of 2015 would provide the same safeguards while offering a due-process procedure to challenge the order. Clinton, however, could impose this by executive action.

Unlike Clinton’s exhaustive gun-control commentary, Trump has been relatively short and sweet by simply saying he opposes everything Clinton supports.

The only thing they moderately agree on is the mental health system is “broken.” Instead of proposing his own actions, Trump supports Cornyn’s Mental Health and Safe Communities Act of 2015 and Rep. Tim Murphy’s (R-Pa.) Helping Families In Mental Health Crisis Act.

Trump says he would outlaw gun-free zones his first day in office, but doing so would require legislative action in overturning the Gun-Free School Zones Act.

Trump supports the national adoption of Project Exile, established in Richmond, Va. Under its auspices, if a violent felon uses a gun to commit a crime, they are prosecuted in federal court and, if convicted, go to prison for at least five years with no parole or early release.

In his 2000 book, “The America We Deserve,” Trump supported the 1994 “assault weapons ban” and longer waiting periods to buy a gun. But, as a Presidential candidate, he no longer does.

“Gun and magazine bans are a total failure,” he writes on his campaign website.

Trump says it makes little sense to expand the background check system when the one in place doesn’t work. He says too many states are failing to put criminal and mental health records into the system. Fix the system, he says, and make it work rather than expand a broken system.

Trump says he will lobby for Cornyn’s National Right to Carry Reciprocity bill, which would make concealed carry permits issued by any state valid in all 50 states.