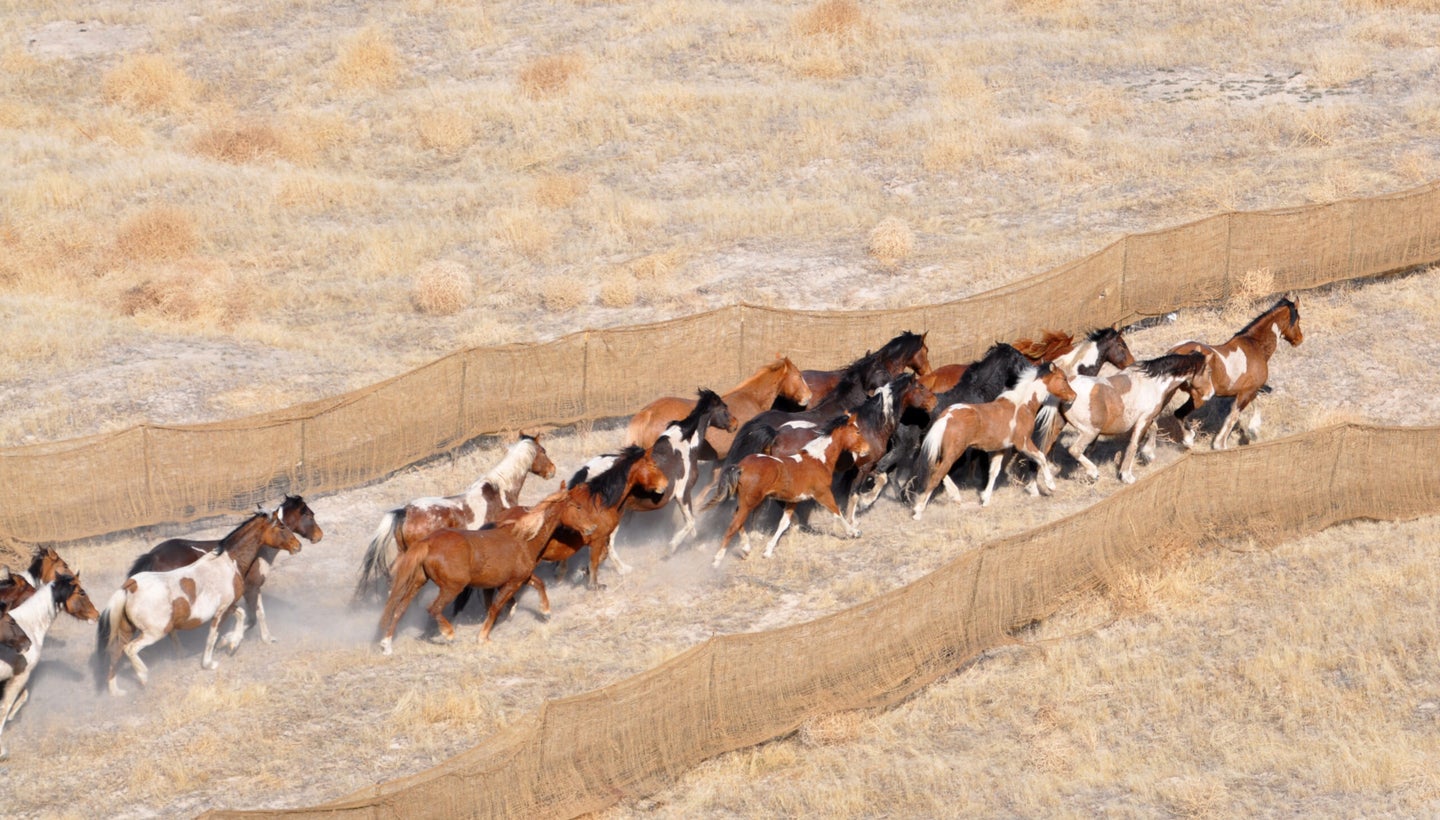 Feral horses gathered from BLM rangeland are herded into a chute. The federal agency has announced the largest scale wild horse and burro gather in the history of the program for 2022. BLM
SHARE

When the Bureau of Land Management announced its annual plan for wild horse and burro gathers earlier this month, the agency managed to piss off at least two factions whose only shared opinion on wild horses is that the BLM is mismanaging them.

In 2022, the federal agency plans to gather at least 22,000 wild equines from overpopulated herds in the West, which would make it the largest number of animals ever removed from their range in a single year.

Some of these horses and burros will be released into the wild again after temporary fertility control treatment, which is scheduled for 2,300 animals in 2022, but the majority will be offered for adoption. Animals that aren’t adopted receive off-range care for the remainder of their lives, to the tune of $48,000 per head. (There are currently 59,000 animals in off-range care, which gobbles up the bulk of the BLM’s budget for its Wild Horse and Burro Program.) To incentivize adoption of these non-native horses and burros, which the BLM may not euthanize or sell for slaughter under federal law, the agency announced Wednesday a cash incentive of $1,000 per animal to approved adopters.

These expanded management plans are supported by 2022’s all-time high budget of $151.6 million. That’s a whopping 31 percent increase over last year’s $115 million budget, of which the BLM spent a record $112.2 million. While the WHB budget has been increasing year over year, this leap in funding is due in part to worsening drought and wildfires in the West that required “a record number of emergency actions to save wild horses and burros and protect critical habitat on public lands” last year, according to the BLM.

“We have an unwavering commitment to the humane care and placement of America’s wild horses and burros,” BLM director Tracy Stone-Manning said in the Jan. 26 statement, which follows her comment earlier in the month that the agency’s “gather efforts, handling standards, and fertility control work are guided by our compassion for these animals and our desire to protect their well-being, as well as the health of our public lands.”

The news, however, was met with predictable outrage from animal activists, who consider roundups by helicopter inhumane, and therefore illegal under the Wild Free-Roaming Horses Act of 1971. Other horse advocates have lost faith in the adoption process, particularly after a 2021 New York Times investigation revealed some adopters were making a tidy profit by pocketing incentive payments then selling horses for slaughter—a direct violation of the adoption terms set forth by the BLM. Organizations like the American Wild Horse Campaign view the expansion of gathers and financial adoptive incentives, rather than the elimination of both, as a betrayal of the BLM’s duties to protect wild horses and burros from harm.

The BLM did not immediately respond to requests for comment, but the agency has historically refuted such claims. As of Jan. 27, 11 horses and burros had died during gathers of 1,182 horses, according to the BLM website, which cites eight of those deaths as the result of pre-existing conditions and just three as acute cases. That’s a fatality rate of .9 percent.

“It didn’t take long for Tracy Stone-Manning to sell out America’s wild horses,” Friends of Animals president Priscilla Feral told the Associated Press, referring to Stone-Manning’s recent (and controversial) appointment to lead the federal agency charged with managing more than 245 million acres of primarily Western land. Friends of Animals is one of three groups that filed a lawsuit last year challenging the gathers in Nevada, where more than half of the BLM’s estimated 86,189 wild horses and burros live.

“Groups who file lawsuits like this continue to prove that they’d rather draft emotional press releases than contribute to meaningful solutions,” Kaitlynn Glover, director of natural resources for the National Cattlemen’s Beef Association, told the AP.

Many ranchers are frustrated by degraded habitat and grazing competition on land that’s designated for multiple use. While the BLM can direct ranchers to remove their cattle or sheep if they begin to overgraze, says Dr. Terry Messmer, a wildlands resources professor at Utah State University, there’s no such solution when it comes to horses and burros. Feral horses range on BLM land around the clock.

“Horses are the most charismatic invasive species in the world,” says Messmer, who calls the current iteration of the WHB Act unsustainable. “[But] they’re an invasive species. We have only a couple populations that still have some of the original genetics of the Spanish mustang. And most of the horses out there have been incidental or accidental releases over time. We have a lot of quarter horses out there.”

Messmer thinks humane lethal management of feral horses, which is underway in Australia, will never become a reality in the U.S. Public opinion would never allow it. So, with few natural predators and without BLM management, wild horse populations double every four to five years. The carrying capacity of their Western range is fewer than 27,000 horses and burros, but as of March 2021, there were an estimated 86,189 animals on that range.

This is lower than the March 2020 estimate of 95,000 animals, which marks the first time the wild horse and burro population on BLM lands decreased since 2012. As the BLM notes, “herd overpopulation threatens the welfare of the wild horses and burros (especially during drought) and the long-term health of the land and the other species that share public lands.”

Until then, however, native species are dealing with the effects of sharing habitat with wild horses and burros. According to a 2021 study published in the Journal of Wildlife Management, the overabundance of feral horses is hurting sage grouse populations. Meanwhile, another 2021 study shows that the horses use much of the same land that native big game species do. While less than 1 percent of feral horse range overlaps with mule deer range in Montana, 40 percent of Nevada’s bighorn sheep habitat is now shared with feral horses.

“Like other animals, [feral horses] are going to go where green groceries are,” says Messmer. “So the wild card in this whole thing is climate change. Climate change, the prolonged predicted droughts, the erratic precipitation in the West—they’ve changed the dynamics. If we’re going to manage these systems by trying to sustain some type of health, everything has to be on the table. If we’re not managing horses in the same way that we would manage, say, domestic livestock, then that creates an untenable situation.”