After Senators Deadlock in a “Skunk Fight” Over Tree-Spiking, BLM Nomination Will Go to the Senate Floor 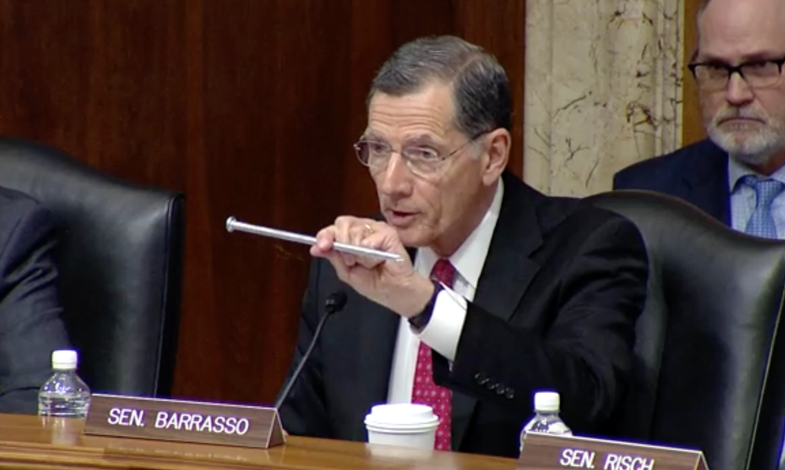 Senator Barrasso (R-WY) holds up a spike similar to the ones used in the tree-spiking incident that was at the heart of Thursday's debate over Stone-Manning's confirmation. ENR Committee
SHARE

Despite more than an hour of “emotional” debate Thursday morning, members of the Senate Committee for Energy and Natural Resources remained divided over Tracy Stone-Manning’s suitability to run the Bureau of Land Management. The vote to confirm her as director of the BLM split along party lines, with all 10 Democratic members voting to confirm, and all 10 Republicans voting against. Stone-Manning’s nomination will go before the full Senate for a vote.

The timing of the next vote is unclear, but it’s likely to happen before the Senate breaks for August recess, which begins August 9 and doesn’t resume until mid September. If the Senate also divides evenly in a 50-50 party line split, Vice President Kamala Harris’ vote would break the tie. Harris has already cast eight votes to break ties in a split Senate since taking office.

RELATED: Republicans Call on Biden to Withdraw His Pick to Run the Bureau of Land Management

The outcome of today’s committee meeting doesn’t come as a surprise after Republican members unanimously asked Biden on July 14 to withdraw Stone-Manning from consideration given her involvement in a 1989 tree spiking incident on National Forest land, which resurfaced following her June confirmation hearing. During Thursday’s debate, which Senator Roger Marshall (R-KS) called a “skunk fight,” Republicans gave a scathing account of what they say was Stone-Manning’s direct participation in tree spiking, the practice of driving metal or ceramic stakes into tree trunks to prevent them from being logged. The practice is a felony that can damage saws and other logging equipment, and it can cause serious injury to loggers.

“Tracy Stone-Manning collaborated with eco-terrorists,” said committee ranking member John Barrasso (R-WY) in his opening remarks. “She lied to this committee, and she continues to harbor extremist views most Americans find reprehensible.”

Barrasso and other Republican committee members object to Stone-Manning’s “perjury” for answering “no” on a questionnaire that asked if she had ever been the target of a criminal investigation. Stone-Manning, and senators who supported her point out that she had cooperated in the investigation and had never been “a target,” therefore her answer had been truthful. Other Republicans attacked her character.

“You put this in a tree to kill somebody,” said Senator Jim Risch (R-ID), holding up a tree spike for emphasis while refuting the suggestion that Stone-Manning made a mistake three decades ago. “This is not a mistake. This is a knowing, willful, intentional act done with a black abandon and malignant heart, intended to kill a fellow human being.”

Democratic senators did not dispute the dangers of tree-spiking, but reiterated that Stone-Manning was never suspected of, charged, nor convicted of participating in the tree spiking, and that her documented role in the incident—mailing a letter to warn the U.S. Forest Service of spiked trees—was to prevent the very injuries Republicans were concerned about.

“The trial proved that Ms. Stone-Manning did not spike any trees,” said Senator Maria Cantwell (D-WA), referring to more than a thousand pages of court records from the 1993 court case that resulted in the conviction of two men. “It proved that she did not conspire to spike any trees, it proved that she did not know about the tree spiking incident until after it happened, and once she learned of the crime Ms. Stone-Manning informed—informed—the Forest Service in the hopes that no one would get hurt.”

“I believe in the rule of law,” said committee chairman Senator Joe Manchin (D-WV) in his closing remarks. “The rule of law basically says that I am innocent until proven guilty. There’s no proof that she’s guilty of anything that we’ve been talking about. And that’s what I think we should be basing our decisions on.”

While Stone-Manning’s role in the tree spiking event was at the heart of Thursday’s debate, Cantwell pointed out that the discussion was too focused on the past—on an incident that happened more than three decades ago—and not on the job at hand.

“In my opinion, what is really on trial here is the future of America’s public lands,” she said. “This vitriol is not about Ms. Stone-Manning in the sense of [the 1993 court case]. It’s about where we’re going in the future. I believe she has been a very successful advocate.”

Cantwell went on to cite Stone-Manning’s public-lands record, involving the cleanup of Montana’s Clark Fork River, a top EPA Superfund site, as well as her advocacy for the bipartisan Great American Outdoors Act and her environmental work in Montana under former Governor Steve Bullock.

“She is a staunch supporter for conservation,” said Backcountry Hunters and Anglers CEO and president Land Tawney, who has known Stone-Manning through Montana’s conservation circles for more than 20 years. “She is very prepared to do this job…This feels super partisan to me, and not about the resource and not about the job. Tracy has a distinguished career that absolutely qualifies her.”

Almost all of the 30-plus conservation orgs that initially signed a letter in support of Stone-Manning maintain their support, including the Theodore Roosevelt Conservation Partnership and the National Deer Association. The Dallas Safari Club publicly retracted its support for Stone-Manning since the tree-spiking controversy emerged this summer. Barrasso mentioned in Thursday’s meeting that the Houston Safari Club also withdrew its support, which an HSC spokeswoman confirmed. HSC executive director Joe Betar notified Barrasso’s staff directly of the organization’s reversal.