50 Years Ago, the Buffalo Became Our First National River. How Well Have We Conserved Our Rivers Since?

After a battle over proposed dams on a free-flowing river, the Buffalo National River in Arkansas was designated on March 1, 1972. Now we're taking a look at that legacy 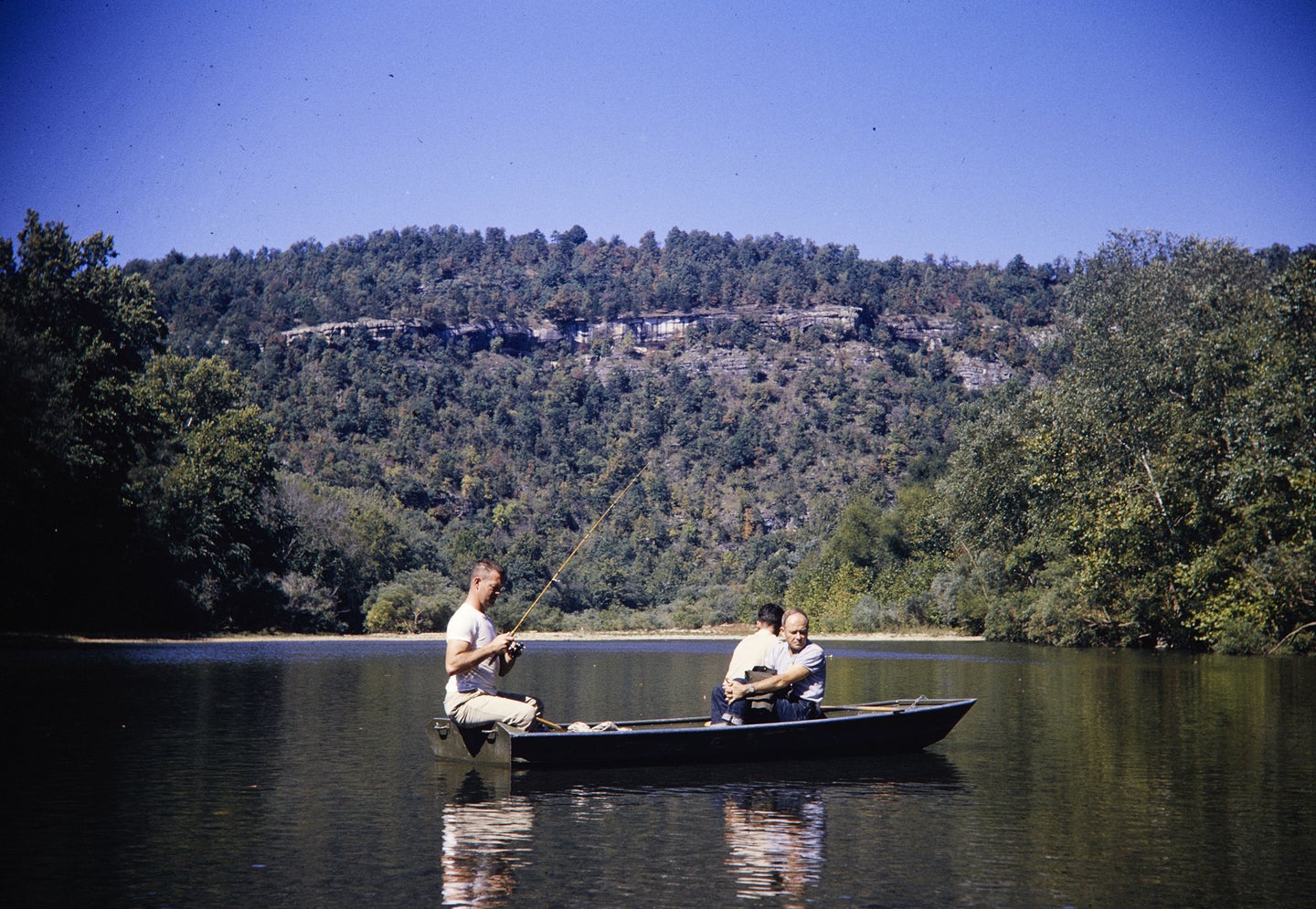 In the heart of the Ozark Mountains, the Buffalo National River winds 135 miles through the Arkansas wilderness, punctuated by towering waterfalls and steep wooded hillsides. Paddlers drifting past its grassy meadows and iconic, multicolored bluffs are bound to spot deer, reintroduced elk, and the occasional river otter. Local anglers can be found chasing some of the river’s famous smallmouth as they navigate glassy pools and stretches of swift whitewater.

“The first time I ever floated the river, those bluffs just stuck in my mind,” says Mike Mills, founder of the Buffalo Outdoor Center, a local outfitting and resort lodge in Ponca. Mills, who started exploring the river on two-week canoeing trips with his father in the 1960s, has made his living on the banks of the Buffalo for nearly 48 years.

Just two years before Mills started working on the Buffalo, Congress designated it as the country’s first National River on March 1, 1972, and placed it under the management of the National Park Service. This past weekend, the NPS celebrated the 50th anniversary of that designation. While the festivities emphasized the importance of the river to the local Arkansas community, they’re also a reminder of the many U.S. rivers and waterways that have been protected since that initial designation 50 years ago.

Mills is proud of the life he’s built along the river and says he’s “been lucky enough to live the dream.” The Buffalo and its community have been a major part of his family’s legacy over the past decades, and he largely credits the growth of his business to the national designation. The creation of Buffalo National River was the first unit of its kind within the NPS, and to this day the Buffalo remains one of the last undammed rivers in the lower 48.

“The national river has employed a lot of local people, including outfitters like myself,” Mills says.

But things weren’t always so serene along the Buffalo. In the years preceding its designation, the river was the subject of intense public debate among conservationists, recreationists, landowners, and energy advocates. At the heart of this disagreement was the proposed construction of two hydroelectric dams on the river’s lower and middle sections. The Army Corps of Engineers had proposed the dams to provide power and flood control to the local communities and towns.

Many Arkansans were furious over the idea of damming the Buffalo, citing the river’s outstanding beauty and inherent need for protection. Several locals wrote the Army Corps of Engineers, including Missouri artist Thomas Benton, who implored the agency to “let the river be.” Stewart Noland, archival chair of the Ozark Society, grew up during the river debate, and described the atmosphere as “fairly contentious.”

The Ozark Society, which was founded by conservationist Dr. Neil Compton, led formal efforts to lobby congressional representatives to sponsor an NPS survey of the river in 1963. And in April 1965, the debate over the Buffalo River garnered national attention when Hank Bradshaw wrote an adventure story for Outdoor Life titled “Brown Bass of the Buffalo.” The piece encouraged readers to back the Ozark Society and write to the Corps. of Engineers, and it helped draw widespread support for protecting the river.

Congress eventually took note and established the Buffalo National River in March 1972. Suddenly the Buffalo wasn’t a battleground anymore, but a beacon for the conservation of rivers and waterways throughout the rest of the country.

The Legacy of U.S. River Conservation

A few years before the official designation of the Buffalo, another act of Congress took aim at river conservation throughout the nation. On Oct. 3, 1968, Congress passed the Wild and Scenic Rivers Act with overwhelming bipartisan support. During the 1960s, the U.S. was nearing the end of a massive campaign to build dams on nearly every river system in the nation. In large part, the passage of the WSRA was a response to growing concerns over the degradation of rivers, including the growing dispute over damming the then-unprotected Buffalo. It sought “to preserve certain rivers with outstanding natural, cultural, and recreational values in a free-flowing condition for the enjoyment of present and future generations.”

These Wild and Scenic protections differ from the National River protections in terms of how the surrounding land is managed, according to Cassie Branstetter, branch chief of interpretation for the Buffalo River. The Buffalo’s designation as a National River allowed the NPS to acquire and protect 95,730 acres of land around the river. (Unlike national park designations, which restrict hunting access in newly-created parks, the river designation of the Buffalo in 1972 allowed hunting to continue within those boundaries.)

Wild and Scenic Rivers, on the other hand, are managed by a variety of federal agencies, from the U.S. Forest Service to the Bureau of Land Management. Once a stretch is classified under the WSRA, that prevents federal support for any actions that might impact those rivers, “such as the construction of dams or other in-stream activities that would harm the river’s free-flowing condition.” But unlike a National River designation, the WSRA doesn’t allow for the acquisition of lands. That means private landowners still have leverage when it comes to supporting or opposing legislation and projects that might affect the river, as well as the land it runs through.

According to the latest estimates, the Wild and Scenic Rivers system currently includes 3,413 miles of 226 rivers in 41 states, from the Klamath River in California to the Concord River in Massachusetts. The act has also helped maintain levels of safe drinking water; today, one in 10 Americans get their drinking water from a Wild and Scenic river.

Still, in many ways, the WSRA has fallen short of its intended purpose. According to the inter-agency coalition that manages the rivers, only one quarter of one percent of the country’s rivers are protected by the system. In comparison, dams have modified nearly 600,000 miles of U.S waterways, or 17 percent of the nation’s rivers.

Tim Palmer, the award winning author who wrote “Wild and Scenic Rivers: An American Legacy,” highlighted this success of the WSRA, despite the fact that it’s “a complex matter.” Its birth and expansion ultimately resulted in “a lot more rivers designated” than if Congress had done nothing at all.

“This magnificent stream was spared from damming and development,” Palmer says of the Buffalo, “and it remains one of the finest free-flowing gems where we can launch a canoe and paddle for a week through public land that’s available to us all.”