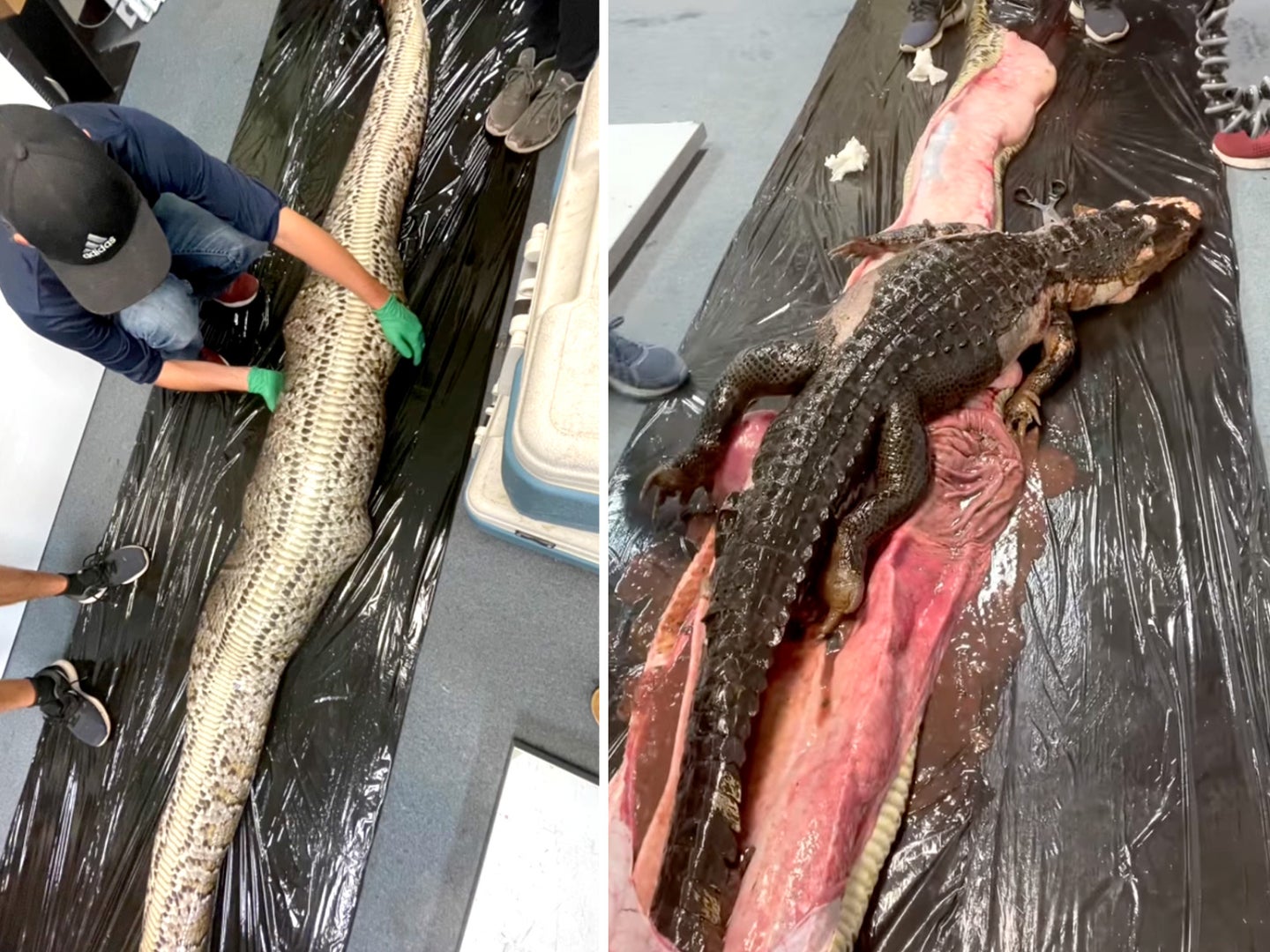 Researchers in the Florida Everglades recently found an intact, five-foot-long alligator inside a Burmese python. Geoscientist Rosie Moore shared video footage of the discovery to Instagram last Tuesday, and it’s been viewed more than 10 million times since then.

Moore was working with scientists when she recorded the footage. She explained in her post that the 18-foot-long Burmese python had been euthanized and brought into the research lab, where they cut open the snake to sample its stomach contents.

“This is called a necropsy,” Moore wrote in a follow-up comment. “Scientists will collect weight, length, morphometric data, and take gut contents. This helps us learn more about how they impact their ecosystem.”

Those impacts are well-known to Florida researchers, who have published multiple studies showing the damage that the huge, invasive snakes are doing to the native food web. Since they have no natural predators in the Everglades, pythons are free to prey on everything from birds and raccoons to large reptiles and fully grown deer.

Outdoor Life spoke with python researcher Ian Bartoszek about this very issue in June, and he said that people are often surprised when they learn what the giant snakes are capable of. Bartoszek pointed to one instance where his team captured a 31-and-a-half-pound snake that had swallowed a 35-pound deer.

“It was the largest prey-python size ratio ever recorded,” Bartoszek said. “That’s what we’re up against. It’s not just rabbits and mice they’re eating. They might start off that way, but early on they become big-game hunters.”

And as shocking as Moore’s video may be, it’s certainly not the first time that a python has eaten an alligator in Florida. Mike Kimmel, better known as the Python Cowboy, commented on the post and said he’s found several pythons with gators inside them. Moore also shared a link to a PBS story that shows x-ray images of a python digesting a whole alligator over the course of seven days.

A new study conducted by the University of Cincinatti takes a closer look at how pythons can swallow such large prey. According to the study, the snakes have extra stretchy skin between their jaws, which allows them to ingest prey that is four to six times larger than what a similarly sized snake could swallow. While it’s extremely rare, pythons are also capable of swallowing humans whole. Just two weeks ago, the body of a 54-year-old Indonesian woman was found inside the stomach of a roughly 22-foot-long reticulated python, a species that is closely related to Burmese pythons.