A Cottonmouth Ate a Python in the Everglades, and the X-Ray Is Wild 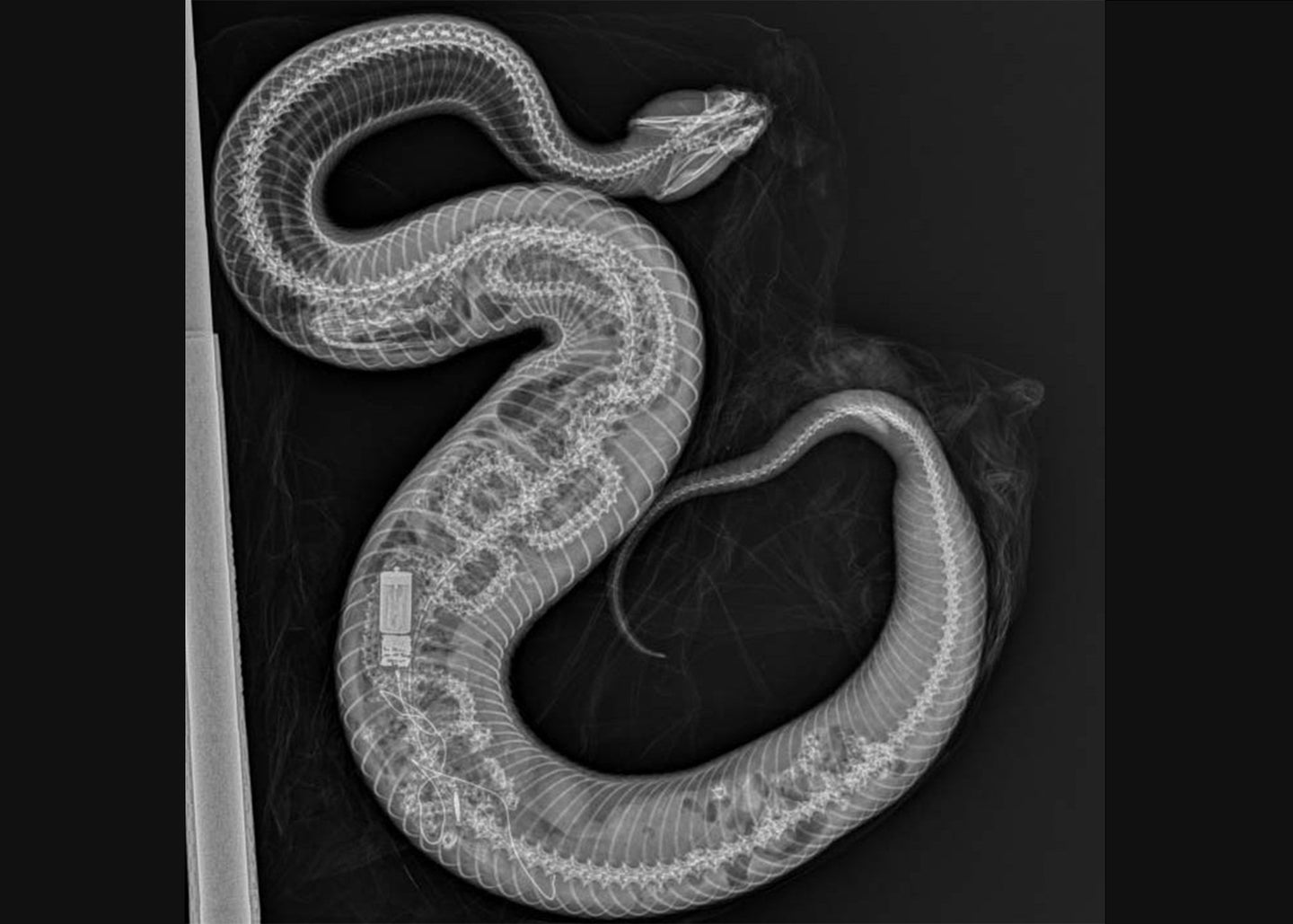 It’s not often that you see a whole snake inside another snake, but an x-ray that Zoo Miami recently shared to Facebook shows exactly that. The x-ray image shows a 43-inch cottonmouth that ate a 39-inch Burmese python in the Florida Everglades.

You can see the curving spine of the python stretched out inside the engorged cottonmouth. The image also shows the radio transmitter that was attached to the python when it was consumed.

Researchers have the transmitter to thank for the discovery. According to a study published last December, this was one of two separate instances where biologists tracked down a cottonmouth that had eaten a python. The first instance occurred in August 2020, and the second occurred in May of the following year.

In May 2021, researchers with the Conservancy of Southwest Florida were tracking a female Burmese python that was around 10 months old and roughly 39 inches long. They tracked the signal from the python’s radio transmitter to the base of a large cypress tree in Big Cypress National Preserve, where they came across a roughly 43-inch-long cottonmouth with an “obvious food bolus” (i.e., a full belly). Researchers assumed that the cottonmouth had eaten the radio transmitter along with the python, and they confirmed this by capturing the cottonmouth, taking an x-ray, and then releasing it.

The researchers continued to track the cottonmouth, and weeks later, it “expelled” (i.e., crapped out) the transmitter.

Why the X-Ray Matters

Florida wildlife biologists spend a lot of time studying Burmese pythons and documenting the damage they inflict on native ecosystems. The snakes grow so large that they have no real natural predators, and this is exactly why biologists get so excited when they see native critters killing them.

Earlier this year, researchers in the Everglades documented a bobcat tangling with a 120-pound female python and stealing its eggs. It was the first recorded video of a native predator taking on a Burmese python in the wild.

The discovery of multiple cottonmouths eating pythons in Florida is yet another example of the state’s native wildlife learning to fight back. In the study that documented the snake-on-snake predation that occurred in 2020 and 2021, the authors list American alligators, Gulf Coast Indigo snakes, bobcats, and “possibly Florida black bears” as other native species that will occasionally prey on Burmese pythons.