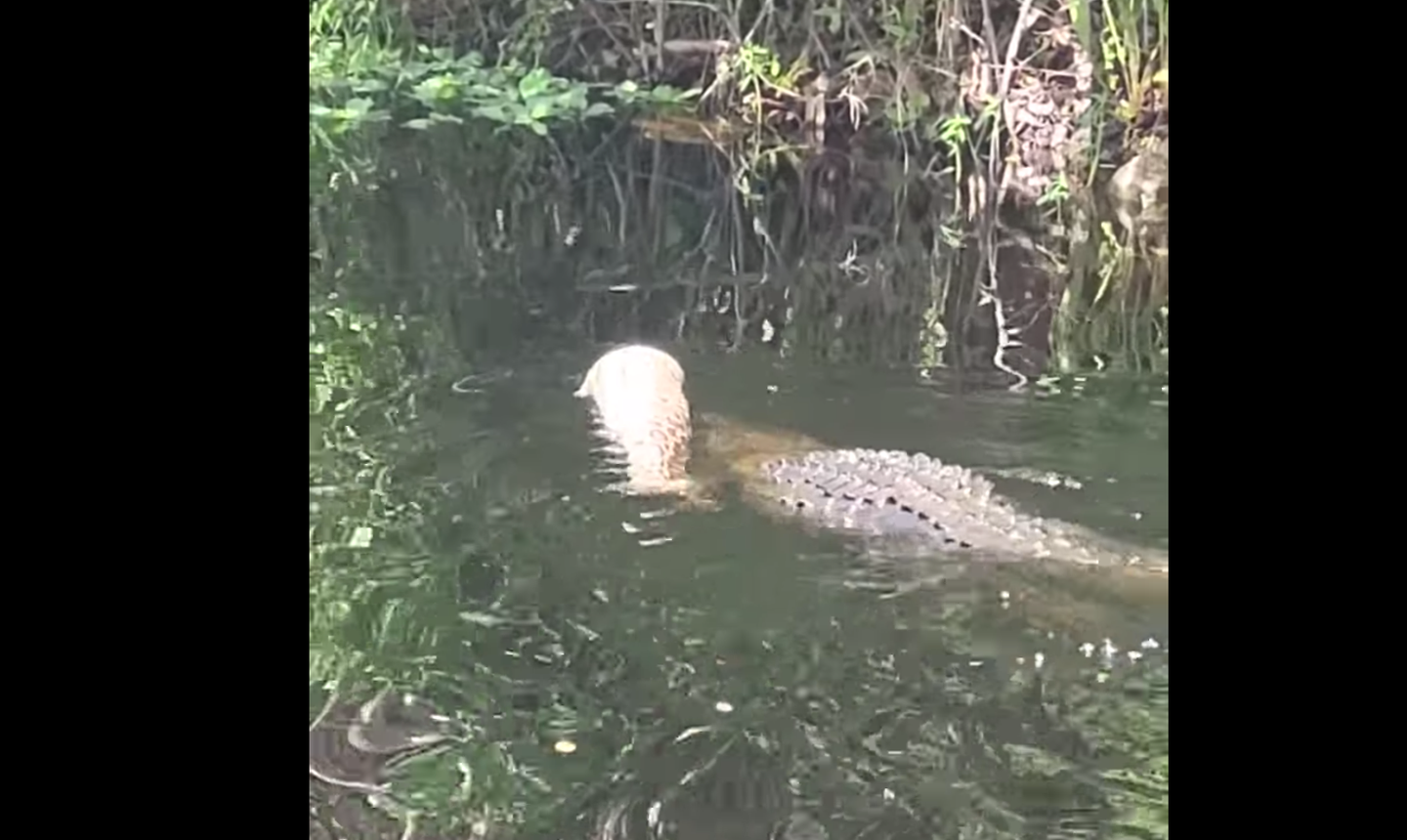 An alligator swims off with a dead python. Carl Nicholson
SHARE

South Florida resident Carl Nicholson of Everglades City recently posted an amazing video that shows a large alligator swimming off with a dead (and equally large) Burmese python. As the gator pushes the python toward a wild and tangled Florida shoreline, Nicholson says in the video that the incident occurred at the 29 Canal in South Florida. This region is known for its abundance of native alligators and invasive pythons.

In the video you can also hear Nicholson say: “That’s a big gator and he can’t even take it down. He’s trying though.”

It’s unknown whether the gator killed the python in an epic struggle between two apex predators, or if the gator simply found the snake dead and was taking advantage of a free meal.

But battles between the two top-tier Florida reptiles is well documented, and there are plenty of videos and reports about such encounters. Alligators have ruled Florida’s waterways since time immemorial. But in the last few decades, invasive Burmese pythons have reached the top of the food chain in south Florida.

Pythons have increased in number exponentially, and have spread from the Everglades to the south, east, west, and north. Current estimates of the statewide python population range from 30,000 and 300,000 snakes. Wherever they slither they can be counted on to take their share of rabbits, deer, turtles, raccoons, possums, and birds, along with any other wildlife species they can coil themselves around. Some studies have found that pythons can reduce small mammal populations by almost 90 percent.

Burmese pythons are among the largest snakes in the world, capable of growing to 20 feet. The biggest python caught and officially recorded in Florida measured 17 feet, 7 inches. Florida alligators are huge, too, with the state record measuring over 13 feet long, weighing more than half a ton. However, researchers say that once a python reaches about six feet in length it has no natural predators in the wild. If that’s true, it’s likely that the snake in the video above was found dead, and not killed by the gator.

Biologists and conservationists are of course cheering for native predators in python country. Last summer researchers with the USGS captured trail camera photographs and videos of a bobcat tangling with a 120-pound female python that was defending her nest.

The bobcat and python fought to a standoff, but then the bobcat came back to raid the nest when the snake was gone. Over the course of several days, it picked the nest clean.  This was the first time a bobcat had been documented preying on python eggs.

“We’re hoping to see if more natives are able to recognize pythons as a food item instead of it only being one-way predation,” lead researcher Andrea Currylow told the Miami New Times. “If that’s what’s really happening, that is so crazy! The capacity of this ecosystem to rebound is really exciting.”