The “Zoom Towns” in the West Could Hurt Big-Game Migrations

As more remote workers look to move West, big-game migration habitat could be in trouble 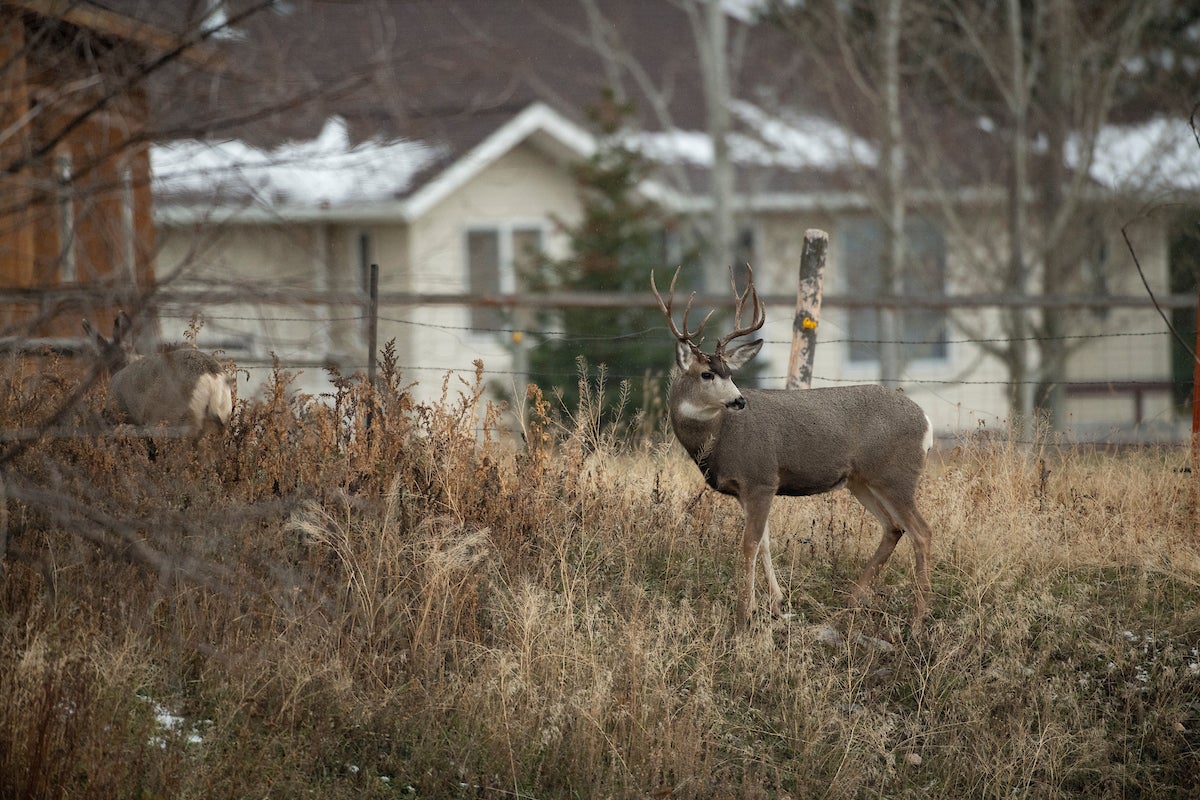 When the pandemic hit and states started issuing lockdown orders, many thought there might be positive impacts on migrating wildlife. Less people traveling on roads would decrease wildlife vehicle collisions. The shutdown of some National Parks, state parks, and other wildlife refuges would relieve the pressures of human disturbances. But what most folks didn’t see coming was the boom in housing development across the West. With properties and houses being bought and built at lightning-fast rates, wildlife managers and researchers are now more concerned about how big-game populations will survive. The fast rate of development is especially concerning for migratory big-game species that embark on bi-annual migrations, some up to 150 miles long.

The pandemic added fuel to the ongoing rural sprawl concerns, a shortage of houses has led to more land being purchased for homes. According to the West Region Census Bureau Report from May 2020-May 2021 there has been a 44.5 percent increase in total new privately-owned housing units, 20.4 percent increase in total new privately-owned housing units authorized but not yet started and a 24.5 percent increase in total new privately owned housing units started. Western communities noticed a trend: Workers who had the ability to relocate were leaving the cities and choosing places that were closer to natural areas with access to public lands. Because of this new trend, some have started calling these places “Zoom towns” similar to the western “boomtowns” brought about by oil or gold discovery—the difference is that the remote workers are searching for seclusion and high-speed internet.

This new wave of home building is contributing to rural sprawl which is a well-known issue for big-game populations. Rural sprawl is when developers buy large acreages of agricultural land and divide that property into smaller parcels for residential housing. This type of development is one of the most significant threats facing wildlife today. It requires more roads, fences, corrals, outbuildings and other infrastructure to be built. It also brings increased activity such as traffic and free-ranging dogs that can impede the movement of migratory animals and cause them to avoid habitat that they need to survive.

Wildlife agencies across the West have reported their concerns about housing development increases and their impacts in the past. In Oregon, the three management units closest to Bend (Metolius, Upper Deschutes, Paulina) mule deer populations on average are 67 percent below the agency’s population objective primarily due to the loss of habitat.

“Development and recreation tourism pressure within migration corridors, while not the only factor influencing populations, certainly is a big factor in the decline of our migratory mule deer herds,” said Corey Heath a wildlife biologist with the Oregon Department of Fish and Wildlife.

“We are to the point now where the development that has occurred has led us to fight over the pieces left.”

The pre-existing habitat loss problem has only been exacerbated by the pandemic. And wildlife managers across the Westare saying it brings with it an existential threat to populations.

“It’s death by a thousand cuts, it’s not one big project it’s a bunch of tiny projects, they are approved at the individual level and are not looked at cumulatively,” says Rick Ward the Deer and Elk Program Coordinator at Idaho Fish and Game. “By the time you can recognize that there has been an impact, it’s too late.”

In Idaho, the largest mule deer herd in the state spends its winters in the foothills just outside the growing city of Boise. Much of the land is owned by the state, however Rick says, “there are still crucial places where those deer have to cross highways and private lands and we are seeing more developments there.” Other mule deer herds in Idaho near Driggs and Victor have limited winter range habitat as the valley bottom has seen rapid development. People have been spilling over from Jackson and Wilson seeking out less expensive properties and more acreage.

Washington also reported that their southern herds remained “stable to decreasing” but loss of black-tailed deer habitat due to encroaching human development continues to be a major concern.

In Arizona, more people and more development has led to road expansions. Mule deer in the rainbow valley area, will have to contend with a new interstate, I-11 that will run through their annual range. In Montana region two, which includes the fast-growing city of Bozeman, there has also been a mule deer population decline in the past few years.

As development is likely to continue, wildlife managers and researchers are racing to map big game migrations. Armed with more funding, new GPS technology and innovative analysis methods, a western states mapping team formed, led by the US Geological Survey. Last fall in 2020, the team published their first report, “Ungulate Migrations of the Western United States, Volume 1”. The effort lays a foundation for agencies, conservation groups, and the average citizen to have access to a common set of big game migration maps and information to be able to strategically work together.

The report also led to the creation of a mapping tool, which provides public access to data on migrating big game through a unique partnership between participating western states. The lead author of the report USGS wildlife biologist Mathew Kauffman, said “These maps are the key to identifying threats to movement and ensuring that critical on-the-ground conservation projects are being prioritized.”

One such example was the mapping of the Red Desert to Hoback migration in Wyoming, the world’s longest known mule deer migration. “Detailed maps allowed us to identify a 360-acre private parcel and associated fencing that created a quarter-mile bottleneck that 4,000 to 5,000 mule deer had to squeeze through twice a year.” Kauffman said.

With detailed maps in hand, conservation groups learned that the parcel was up for sale and was destined to turn into housing developments. The Conservation Fund was able to purchase the parcel and turn it over to the state to manage as a Wildlife Habitat Management Area.

While there are many conservation organizations working to ensure connectivity of landscapes through tools like easements, in some places especially in many rural western communities they are impossible to secure. Conservation easements are voluntary, legal agreements between a landowner and a land trust that impose development restrictions on private land. New research led by Andy Hansen a professor at Montana State University reveals that existing conservation easements in the northern states of the West are not in areas that will best sustain biodiversity, one of the important indicators of biodiversity in the study was connectivity.

Wildlife agencies in the West don’t have the authority to say “yes” or “no” on development projects, those decisions are left to the local government. County and state planning goals vary and have not been updated since the 70’s in many areas. Many biologists interviewed for this article said they had never seen a housing project denied because of wildlife movement concerns.

Another solution to address rural sprawl and crucial habitat loss is through planning and zoning regulations that establish urban growth boundaries (UGB’s) or urban service boundaries (USB’s). UGBs are a regulatory tool that local governments can use to declare a specified area off-limits to development based on a certain density. Governments typically provide a supply of developable land within the boundary to ensure that the demand for new homes can be met. USBs on the other hand are financially driven tools in which governments withhold development subsidies in areas deemed inappropriate for development. Both of these tools can help keep working landscapes intact and make sure wildlife have open space. They keep the property values of agricultural land affordable so farmers and ranchers can purchase the land for that same use while redirecting developers to purchase areas that have already been settled.

How Hunters Can Help

While it’s hard to tell how much land development will occur in the next year or if that development is directly caused by the pandemic, one thing is clear: Hunters will need to get involved in land use solutions if they want to conserve migrating big game. That means, urging your local government officials to dig up their old county development plans and updating them to be more wildlife friendly. Even though attending meetings or inviting your county commissioner for coffee to discuss habitat development might not be as sexy as volunteering for other labor-intensive conservation projects like a fence removal it could have larger implications for the wild game you hunt.

Getting involved with Land Trusts that are working to secure habitat easements on private lands is another action hunters can take. If you happen to be an engaged member of a big-game focused conservation organization, push your leadership to prioritize projects on habitat protection within migration corridors.

The reality is that without adequate protections for habitat, development poses an existential threat to migrating wildlife populations. Just because a migration is known does not mean it is protected. There is no single tool to protect entire migration routes that traverse multiple-use landscapes. But mapping is a first step towards more informed decision-making.

Authors Note: Researchers and managers are hard at work producing Volume two of the report that details dozens of routes in California, Colorado, Montana and Washington.  This regional mapping effort was supported by the Department of the Interior Secretary’s Order 3362.