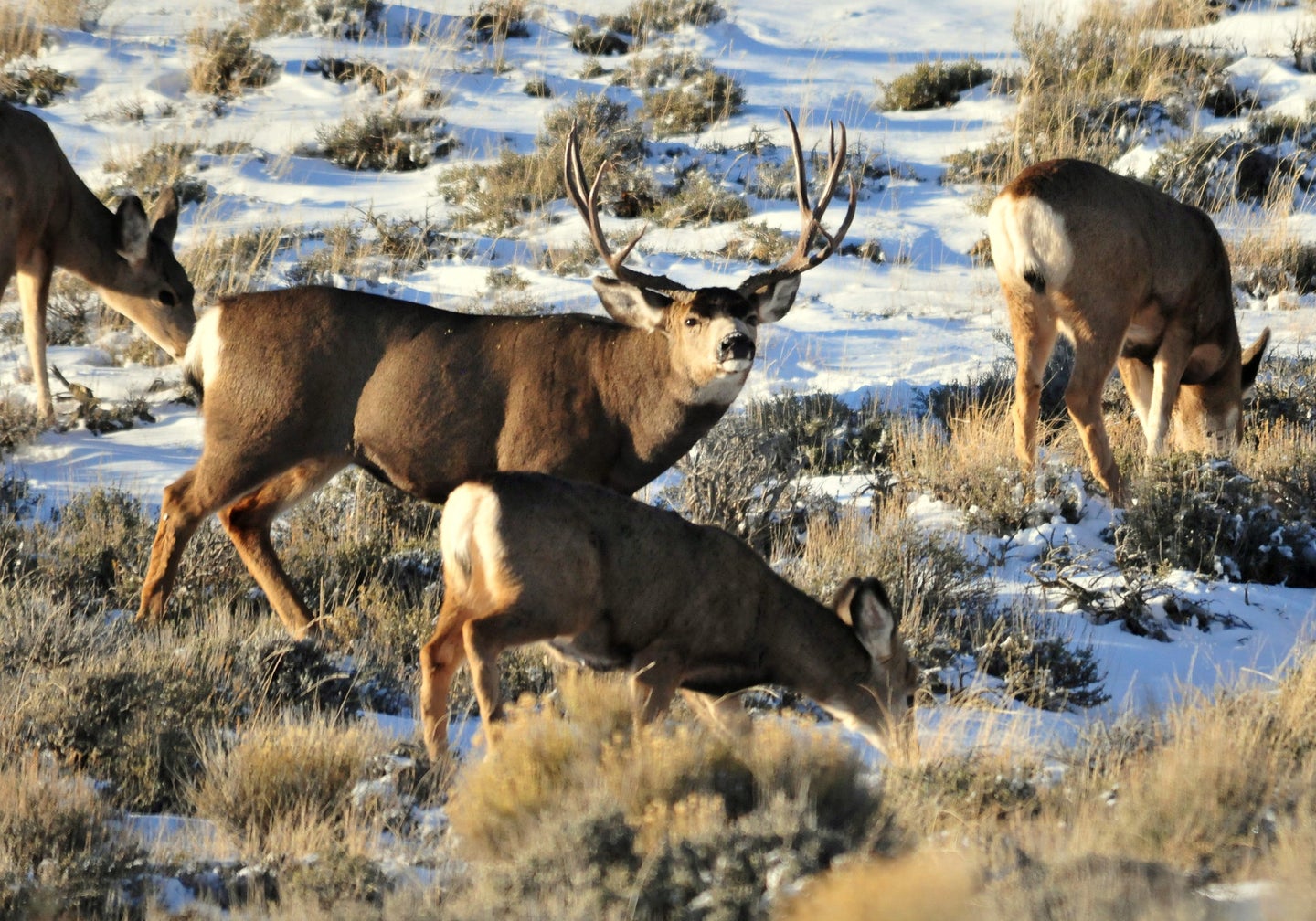 A recent study from the University of Wyoming and the Idaho Department of Game and Fish predicted mule deer migration routes by using information that most mule deer hunters already rely on: Herds seek out good food and cover and try to stay away from humans whenever possible.

Migration mapping is something that only GPS collars have been able to accomplish thus far. This practice has become all the rage in the wildlife management scene as urban sprawl, natural resource development, wildfire, drought, and other landscape impacts continue to squeeze the spaces mule deer and other migratory species use to travel between summer and winter turf. If wildlife managers can pinpoint migration routes and key ranges, there’s a better chance of those habitats being conserved.

A team of researchers led by Tristan Nuñez, a postdoc researcher for the U.S. Geological Survey’s Wyoming Cooperative Fish and Wildlife Research Unit at the University of Wyoming, published the study in Methods in Ecology and Evolution on Sept. 18. The article points out that GPS data isn’t readily available for most individual herds or flocks of migratory species, since GPS tracking critters is often pricey and challenging for wildlife agencies to employ. Individual GPS units can cost up to $2,000, and that doesn’t count the salary hours and equipment used to attach them to the animals in the field.

But by using landscape features, seasonality, proximity to humans, and a host of other factors, the research team was able to forecast with extreme accuracy which corridors mule deer would use to travel between seasonal ranges. They proved their method by comparing their predicted routes to actual routes used by 130 GPS-collared mule deer in Idaho and Wyoming herds.

“We wanted to use what we know about how the environment shapes the movement of the collared deer to predict the migrations of non-collared herds,” Nuñez tells Outdoor Life. “We figured out how to do that using an algorithm that’s very similar to the ones Google or Apple use in their wayfinding software [or Map applications]. We basically found the set of rules that best predicts where collared deer go based on the environments they’re moving through. We were able to develop these wayfinding algorithms for three different mule deer herds in Idaho and Wyoming.”

Why the Study Matters

The applicability for this type of migration forecasting is widespread. As researchers continue to determine the needs of individual migratory species, such information could be used for birds, elk, and any other species who face a journey riddled with roadblocks. If GPS data is completely nonexistent for a specific migratory herd or flock, this model can still fill the gaps and predict the optimal path from point A to point B. It even works to predict how nonmigratory species move between parts of their range.

“We can use this type of information to plan development, like renewable energy or housing, in ways that don’t block migration routes. We can also use it to find places to make fences more deer friendly or put in overpasses. These are all strategies to support healthier herds,” Nuñez says. “Any time that an animal is balancing the costs and benefits of movement, this approach works really well.”

In short, the method is doing the same thing that mule deer hunters try to accomplish each season: Scout potentially attractive habitat that meets deer’s needs and priorities.

“Hunters, land managers, folks who use a lot of time on these landscapes, can pick up intuitively some of these rules,” Nuñez says. “The deer are obviously doing these cost-benefit analyses, but it takes a lot of computer power to figure them out because we have to look at all the possible routes the deer might take and figure out what’s special about the one they did take. But that’s the amazing thing about these animals and the folks who spend a lot of time on the landscape, is that they’re able to do these calculations and figure out what makes the most sense for the deer.”

Of course, identifying key habitat and migration routes is only the first step to protecting these pathways mule deer rely on to survive. State and federal agencies still need the resources (and the guts) to actually make such conservation happen. Otherwise, as urban centers in the West expand, recreating populations grow, and needs for infrastructure-intensive energy development press on, migrating mule deer will be forced to take more challenging detours.

But still, Steve Belinda, director of conservation for the Mule Deer Foundation, is excited for what this model can accomplish.

“We’re never going to be able to put collars everywhere,” Belinda tells Outdoor Life. “With changing conditions, whether that’s climate or human use or whatever, being able to use the least costly method to predict where animals could shift to, what they need, what places we should try to avoid or preserve, is extremely important—particularly in land use planning and development planning. [This method is] super exciting and encouraging, we have high hopes for it to continue to be refined and used in places where you can’t get collars or where people can’t afford it.”