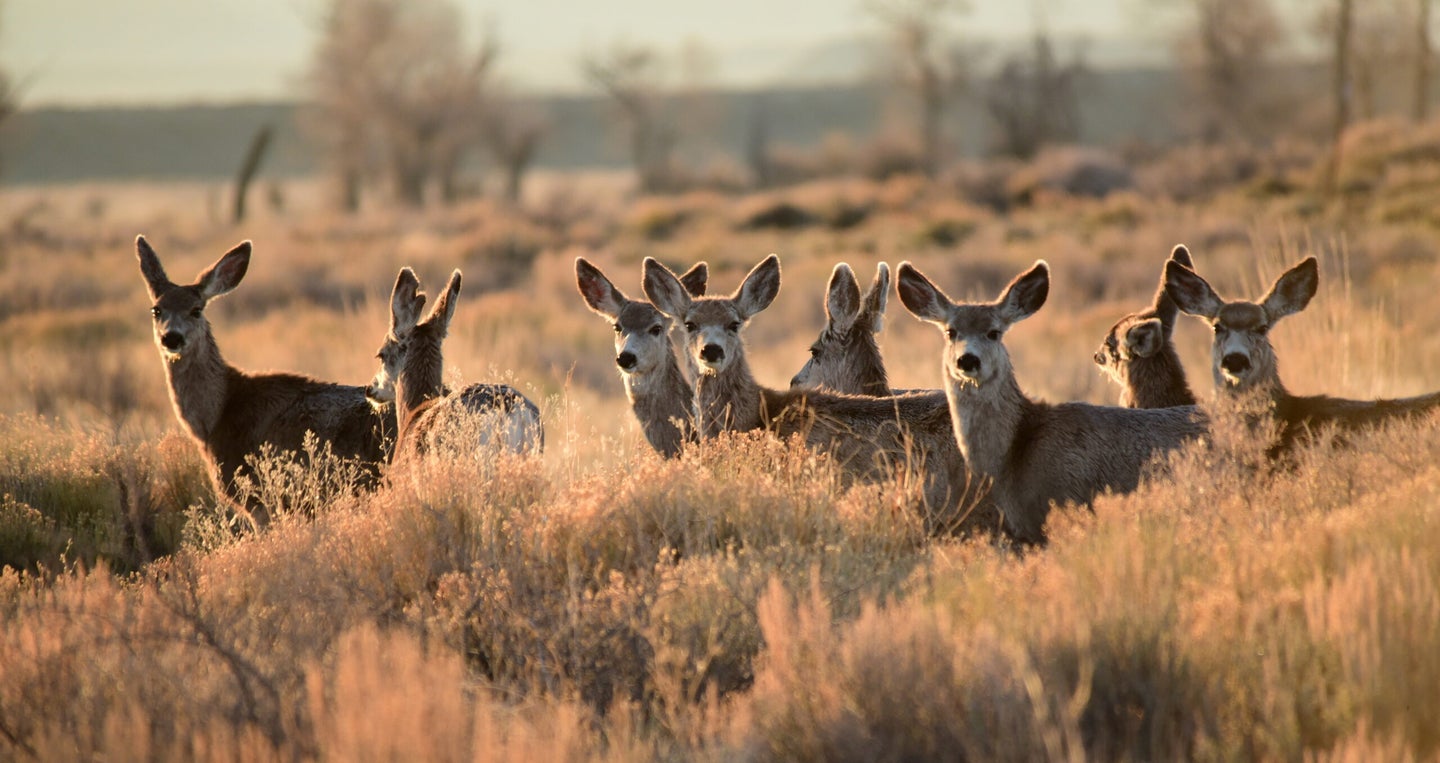 Existing programs that have already helped conserved millions of acres of wildlife habitat in the U.S. should be leveraged for the Biden administration's 30 by 30 goals. Tom Koerner / USFWS
SHARE

Much like the rest of the world, the U.S. is losing open spaces at an alarming rate, with some estimates showing we lose a football field-sized chunk of natural land every 30 seconds. Our nation is also rapidly losing native animals. The U.S. Fish and Wildlife Service announced on Sept. 29 that 23 species—primarily mussels, birds, and fish—are officially extinct. But this dismal trajectory is not a foregone conclusion. More than 50 hunting and fishing organizations recently sent recommendations to President Joe Biden on how to turn it around, a response to Biden’s call to conserve 30 percent of the nation’s land and water by 2030 as part of his recent America the Beautiful initiative.

The remarkable part about these recommendations isn’t just that 55 sporting groups representing everything from bass anglers and marine retailers to quail and mule deer hunters agreed on a 23-page report, though that’s also worth noting. But more remarkably, reaching the ambitious 30 percent goal in the next decade might not actually be as radical—or as difficult—as it sounds.

So what do these groups think the current administration must do to achieve a lofty goal with a catchy title that has the chance to benefit every sportsman and woman in this country?

“We need to double down on what is already working and really increase the pace and scale of efforts we’re already engaged in,” says John Gale, the conservation director for Backcountry Hunters and Anglers.

The U.S. already has dozens of programs established to help conserve its lands and waters, ranging from voluntary incentives like the Conservation Reserve and Conservation Stewardship programs to mandatory closures of fisheries to protect spawning. It also has tens of millions of hunters and anglers willing to fund conservation efforts.

The Difference Between Conservation and Preservation

It might seem basic to define a term like conservation. Most of us likely buy a state conservation stamp of some kind to hunt or fish, we may donate to conservation organizations, or we take pride in knowing sales taxes on guns, ammo, and fishing gear money go back to fish and wildlife habitat. But before the Biden Administration marches too far down a path of conservation, more than 50 of the nation’s hunting and fishing groups want the administration to let people know how it defines the word. “Conservation” may not mean the same thing to birders, as it does to, say, duck hunters.

“So far, there’s this idea or fear by some that this effort means we will lock things up and eliminate access and it will limit private landowners, and that’s not true at all,” Gale says.

That’s why it’s important for the administration to first create a clear definition of conservation as “active management and sustainable use of our nation’s public trust fish and wildlife resources,” write the recommendations.

Defining conservation becomes important in public policy because it can make the difference between a chunk of land that’s roped off from human impact, or one that allows hunting or fishing. It’s also important because “conservation” often crosses political lines. “Preservation” rarely does.

And for something like the 30 by 30 plan to work, it has to cross political lines, says Gale and others.

The seemingly arbitrary goal of protecting 30 percent of the nation’s land and water by 2030 isn’t a new initiative created by this administration. Former secretary of Interior Bruce Babbitt and retired New Mexico Sen. Tom Udall brought the idea to national attention years ago. Udall even introduced a bill in the Senate in 2019 to try to accomplish as much.

It stems from scientists’ belief that conserving 30 percent of the world’s land and water will protect about 75 percent of the Earth’s species. That’s particularly notable as climate change only exacerbates the problem.

So Biden proposed the idea early in his presidency as part of an executive order. Dozens of sportsmen’s and women’s groups responded to the concept with a plan called Hunt Fish 30×30. They told the administration that this kind of ambitious goal couldn’t work without hunters, anglers, and outdoor enthusiasts at the table.

So far, says Chris Horton, a senior director at the Congressional Sportsmen’s Foundation, the administration appears to be listening.

In June, the White House released its America the Beautiful plan, which renews calls for 30 by 30 and includes many pieces from the Hunt Fish 30×30 concept including to work with local governments and agencies, Tribal leaders, sportsmen’s and women’s groups, and private landowners.

Groups like the Congressional Sportsmen’s Foundation are encouraged, Horton says, and remain “cautiously optimistic” that the effort will lead to the kind of conservation hunters and anglers have been pushing for well over a century.

Part of the administration’s plan includes the creation of a conservation map, formally called the American Conservation and Stewardship Atlas. In short, it’s a comprehensive way to show what land is and isn’t conserved, and where possibilities for new conservation efforts exist.

The U.S. Geological Survey estimates about 12 percent of land in the U.S. is currently “protected,” but the hunting and fishing groups say that definition is too narrow. It’s likely more than 12 percent is conserved. Knowing what is and isn’t conserved is critical for knowing how to tackle new locations.

Plus, the report states, large stretches of conserved landscapes in the country need “active, science-based management or restoration.”

Hunting and fishing groups want the federal government to create a map that includes land enrolled in programs like the Conservation Reserve and the Environmental Quality Incentives, that work with private land owners to restore and maintain habitat for wild creatures.

“People may be surprised what is already in conservation status and some kind of reparation status, and what we have plans for already that might be shovel-ready projects,” says Gale. “This gives us something that everyone agrees on, so everyone is operating from the same place.”

According to Palmer, administration officials say they could have the initial atlas concept out in the next few months.

All of this leads to the coalition’s main point: Don’t reinvent the wheel. They want the Biden administration to work with local sportsmen and women, tribes, local governments, and state game agencies to identify conservation needs and how to address them. Then look at ways to do this by boosting existing programs.

Focus on voluntary incentives like the Wetlands Reserve Easement, which pays landowners and tribes to “restore, protect, and enhance wetlands.” More than 11,000 landowners enrolled 2.3 million acres in the program in its first 20 years. Healthier wetlands mean better fish and wildlife habitat. And clearly, sportsmen’s groups argue, there’s a need for that.

Or look at grassroots efforts underneath the National Fish Habitat Partnerships program. The program oversees 20 partnerships across the country, including the Atlantic Coastal Fish Habitat Partnership, which has, in the last decade, opened 240 river miles to migratory fish and provided access to more than 5,500 acres of spawning habitat. The program also oversees Fishers & Farmers, which adds value to farms while “protecting, restoring, and enhancing the 30,700 miles of rivers and streams of the Upper Mississippi River Basin.”

But right now, all 20 partnerships are vying for only $7.2 million in federal funding despite proof the partnerships help conserve natural space and keep landowners whole, Horton says.

The 30 by 30 plan should focus on helping states with game management areas, conservation areas and wildlife management areas. These are all local places already designed to conserve land for wildlife. Plumer wants the feds to think a little more creatively. Look to agencies like FEMA, she says, which have large pots of money designed to help rebuild local communities.

“Can we be doing that community work in a longer-term way that integrates nature-based solutions?” she says. “If you’re rebuilding a levy to protect a local community, think about working with the community to set the levy back, restore the floodplain, and utilize the natural protection of a floodplain to survive the next flood cycle.”

It’s not only a win for increasingly-flood prone communities, she says, but also for fish and wildlife.

This coalition of sporting and conservation groups is realistic. They know the administration is still in the planning phases.

“Our greatest interest was helping shape the direction,” Gale says of the 30 by 30 initiative. “So we can make sure what they’re doing is consistent with hunting and fishing, and fish and wildlife habitat.”