Iowa Angler Lands a 34-Pound Catfish Through the Ice

After fishing a tournament, Gavin Campbell knew the bite was on at Lake Manawa. So, he went back and hooked into a 40-inch flathead 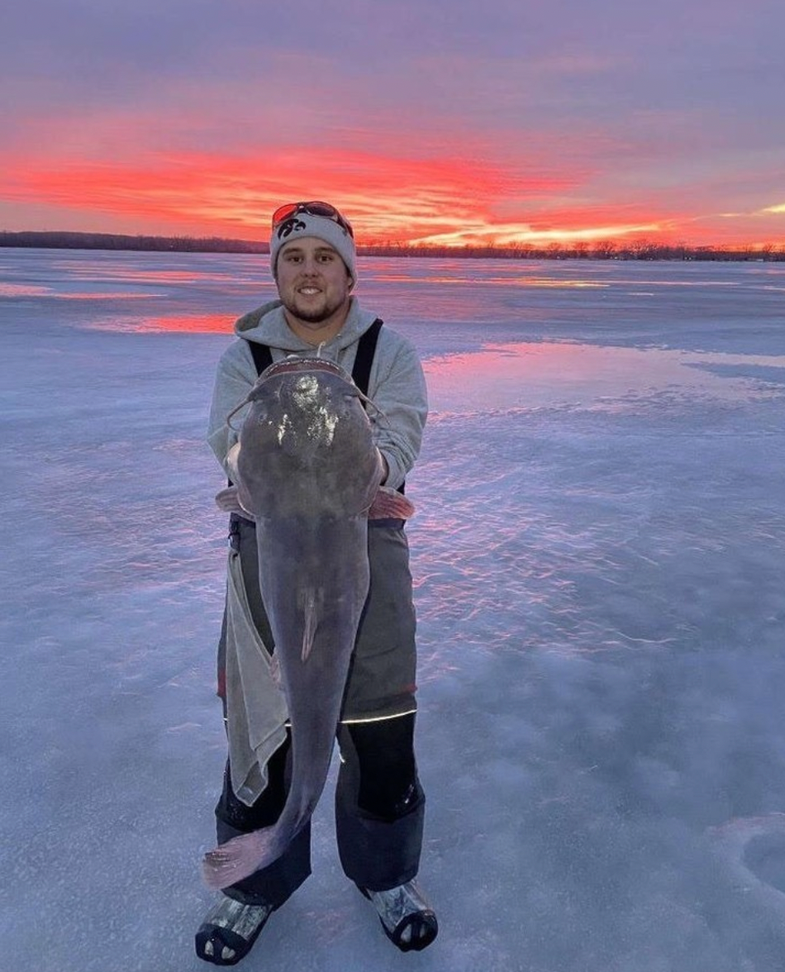 In late January, Gavin Campbell spent the weekend fishing a tournament on Lake Manawa in western Iowa. He won the catfish category after pulling a 32-inch, 17-pound lunker from the ice. Campbell also finished the tourney in second-place overall. Since the bite was on, he decided to head back out to Lake Manawa after work the following Monday. Campbell hooked into a giant flathead.

“I honestly thought that I was snagged when I set the hook,” said Campbell. “It took a few seconds before I felt it move and I then I knew it was a big fish.”

Campbell and a friend dropped their lines through 12 inches of ice and waited. It didn’t take long for the action to start.

“I only caught one fish that night but it took us the whole night to get it in” Campbell said. “I think it took that fish a minute to realize that he was hooked and then he started running and fighting.”

After a battle that lasted close to 45 minutes, Gavin finally pulled the fish through the ice.

“To get a fish that big to turn its whole body up a small hole in the ice…it was not an easy task,” he said. “By the end of it, we had a 30-something inch hole we were pulling this fish out of.”

The catfish measured 40 inches long and weighed 34 pounds, almost double the weight of the catfish he caught during the tournament.

“I keep thinking about that fish and if there is a bigger one out there that I should be trying to catch,” Campbell said.

Read Next: Expert Tips on How to Catch Catfish

Campbell released the fish back into Lake Manawa after taking a quick photo. With this catch, Campbell is now considered a Silver Master Angler by Iowa DNR because he has caught five different species of fish (from a list of 40) that meet minimum length requirements. His four other catches include: bigmouth buffalo, bluegill, largemouth bass, and shortnose gar. His next designation would be Gold Master Angler, which requires a fisherman to catch 10 of the 40 fish from the DNR list that meet measurement standards.