Jigging for Pike in Alaska: The Most Fun You Can Have Below Zero

If you thought ice fishing for trout or panfish was addicting, just wait till a 40-inch pike grabs your hook 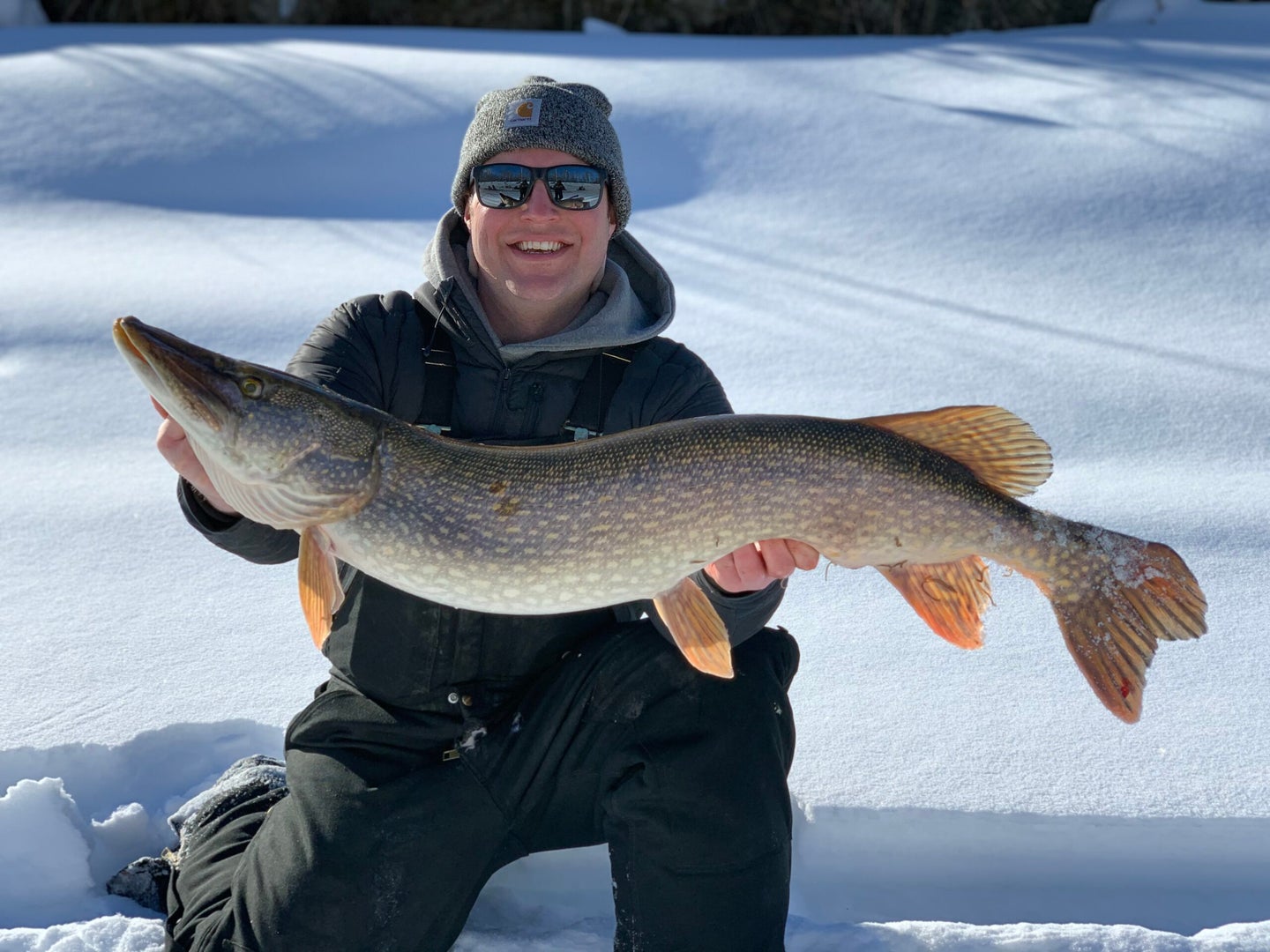 If you manage to hook into a pike like this one, you're the one that's going to be hooked. Tyler Freel
SHARE

“He’s got to be hung up on something,” I told my buddies as I tried to get the big pike up into the 10-inch hole. I’d been battling this fish for several minutes, waiting for its gaping, toothy mouth to appear in that portal through the ice. This was a big one for sure. I’d already caught two that flirted with the 40-inch mark that day, and this one had been peeling drag with twice as much ferocity as they had.

The water wasn’t too deep, and I had worked the fish toward the hole, but I couldn’t get him any farther. The fish was stuck. After several minutes of waiting for the pike to shake its way free, and wriggle up into the hole, I reluctantly let the line go slack. Sensing some relief, the pike immediately screamed off, peeling drag once again. I slowly hoisted him back up but got the same result. It went on like this for nearly 20 minutes.

“He must have wrapped the line around a tree root or something,” I said. It was the only thing that made sense to me at the time. Frustrated after nearly 20 minutes, I resigned myself to simply trying to pull on the heavy braided line, hoping to dislodge whatever it was wrapped around. I held the spool with one hand, pointed the rod into the hole and pulled back as hard as I could. Pop! Through the line, I could feel the crunch of the hook pulling out of the fish’s mouth and my spoon came flying up out of the hole.

I was disgusted with myself, and more so when I realized what the real problem had been. The spring sunlight made it difficult to see down the hole, but if I’d only looked closely, I would have seen the top of my steel leader—and known the fish was simply stuck on the underside of the ice. Now whenever I go pike jigging, I make sure to bring along a homemade gaff that I fashioned out of a broom handle.

Mystery Under the Ice

As you might expect in a place that experiences winter for half the year, Alaska has some great ice-fishing opportunities. The opportunities are as diverse as the country is, but one of the most fun fish to target is the northern pike, which make for great eating, too. Pike are native to many Alaskan waters and can be caught through the ice in both lakes and rivers (which also freeze solid in the winter).

Some people think ice fishing is boring, but I’d argue that it has a mystique, and creates a sense of anticipation. You never really know what’s lurking in the watery world beneath several feet of ice. Until you catch it, that is. When the fishing is good, ice fishing for pike can be non-stop action. And when you’re catching big pike, it can spoil you for just about anything else.

For almost everything worth doing in Alaska, weather and logistics are the limiting factors, and ice fishing is no exception. It’s an undertaking just to get to where you want to fish, and you may have to contend with extreme conditions along the way. Many of the best fishing spots are relatively remote and require snowmachines to access them.

Interior Alaska is known for its bitter cold winters, with temperatures of -40°F a common occurrence. Most folks try not to go ice fishing in those temps, but Alaska can surprise even the most careful plans. Recently a couple buddies and I made a long day trek to fish for lake trout, with the temperature hovering at about 0°F. As we got to the lake, we hit a pocket of -30°F air that only seemed to get colder as the day wore on. Even with two heaters running at the max, we could barely keep our pop-up shanty livable.

Even in the spring when the sun’s warmth begins to return, temperatures and conditions can deteriorate rapidly. You can still see -30°F in March, but things are beginning to warm up. You might be riding through frigid whiteout conditions in the morning only to get sunburned while wearing a T-shirt that afternoon. But warmer temps can be a pain, too.

As the weather warms, overflow becomes another potential problem. Overflow refers to water that is sitting or flowing on top of the ice layer. It can occur throughout the winter—especially on rivers—but becomes common in the spring. Sometimes you don’t even know it’s there. One spring ice fishing trip, a buddy and I lit off across a big lake on our sleds. When we stopped, I jumped off the sled, only to break through a thin crust of snow and get up to my knees in slush. When we tried to move, my snowmachine broke through, too, and it took hours of lifting and pulling that heavy beast to get moving again.

Tactics and Gear for Pike

Pike are a relatively easy fish to catch once you find them. Their bite will pick up and slow down like other fish, but once you get into them, you’ll probably catch a bunch. Dedicated lake trout ice anglers might spend a whole day on one or two fish, but in a good day of pike jigging, you might catch 50.

Tactics for targeting pike are simple. In lakes, you want to find structure that holds smaller fish, which will undoubtedly attract cruising pike. In rivers, pike are more likely to be schooled up in deep, slow-moving holes or at the confluence of waterways. In areas with lots of pike, I’m a fan of covering ice and drilling lots of holes. Perhaps it’s simply my impatient nature and this makes no difference at all, but I’m always wondering what’s waiting at the next spot. If the fishing gets slow, I simply move.

Many anglers in the Midwest target pike with baited tip-ups, and while this does work fine, I think it’s a lot more fun to jig for them. Sometimes a big pike will nearly rip the rod out of your hands, and other times you won’t even feel them take it till you try to jig. The anticipation is palpable, and when the fishing is good, a single jigging rod will keep you too busy to worry about a tip-up. My buddies and I don’t get hung up on particulars about our rods either—any decent ice rod that will hold up to a 20-pound fish will do. Lots of folks even use the Native-style jigging sticks with heavy line wrapped around them. I use cheap, medium- to heavy-action ice rods and just swap my summer spinning reels over. I use 30-pound test braided line with a steel leader. The braided line does ice up at the waterline when its cold, but I use it anyway. I just periodically break the ice off and keep fishing.

For lures, a solid go-to is a silver Krocodile or Daredevil-style spoon. Of course, the red-and-white Daredevil, five-of-diamonds, and other colored spoons work well too. I’ve had great luck with large tube jigs, but sometimes even pike can be picky. One day, buddies fishing less than 20 feet on either side of me were using silver spoons and putting one pike after another on top of the ice—I wasn’t getting a bite. I switched from the tube jig to a silver spoon and immediately started catching fish. Don’t be afraid to mix it up. If it’s legal, bait always helps—we usually use a chunk of cut herring or whitefish.

A “monster fish” is a relative term, and out there somewhere, the bar is always a little higher. When you can get lucky enough to catch several 10-plus-pound pike to the topside, however, you’re guaranteed to be having a good day. For the fishing I do, we usually consider a pike in the 36- to 40-inch range, and over 10 pounds, a good one.

The best day of pike jigging I’ve ever had was a few years back—in the middle of April. A few buddies and I encountered so much overflow that we couldn’t even make it to the area we wanted to fish. So we made due with a closer spot we’d always overlooked—and hit the motherlode. For over an hour, we would have fish on immediately as our spoons got below the ice. Standing in in a foot of slush, fishing through 4 feet of ice, we were catching big pike after big pike in as little as 2 feet of water. Five of us caught more than 150 pike that day. We kept quite a few for the freezer, and I’m not sure I’ll ever be able to top it.

The Other White Meat

Despite a well-deserved reputation for being bony, pike are excellent eating. Their skeletal structure makes them a little tricky to fillet, but it’s not rocket science. I like to stock up on pike late in the winter and enjoy it throughout the summer months. Pike is a mild-flavored white meat that’s nice and flakey. It’s great grilled in foil, breaded and deep fried, boiled as poor-man’s lobster, and pickled, and it takes a smoke nicely.

I’ll often strip Y-bone-in-fillets on the ice, clean them at home, then soak them in a simple wet brine overnight so I can smoke them the next day. Smoked pike is great for snacking, and it makes some mean fish dip, too.

It’s fun to catch lots of fish, and I’m out there to put food in the freezer, too, but it’s important to help keep the resource healthy. My buddies and I almost always use large single hooks and carry pliers to remove them quickly from fish we aren’t keeping. If it’s cold out—especially when it’s below zero—it’s important to get the fish back into the water immediately and not let them touch the ice. Letting a fish lay on the ice or snow in extreme cold will quickly damage its skin and fins, and can ultimately kill them. Plus, most of the big, fat pike are females that are full of eggs. So try to keep more of the skinnier males—within legal limits, of course.

Pike jigging is an incredible amount of fun—even if part of that fun is ferociously drilling holes in search of that one magical day, or that monster fish of seasons past. You’ll probably be distracted, standing there looking at the sky when that water wolf grabs your line. And when that happens, you’re going to be the one that’s hooked.