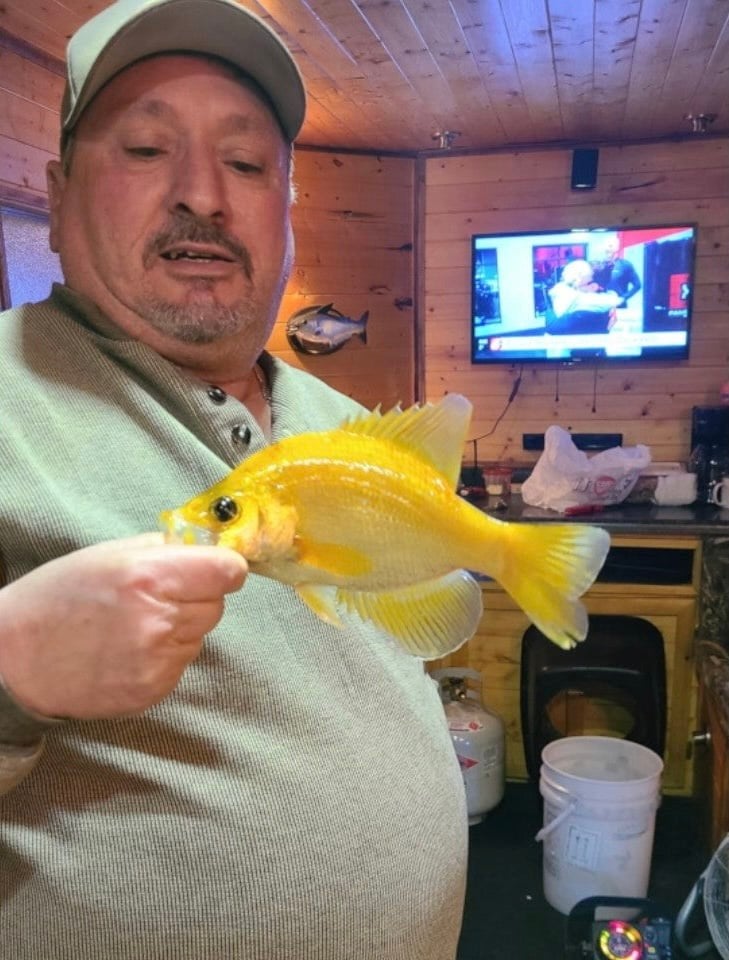 Rick Konakowitz has landed plenty of fish in his 25 years of ice fishing. But on Feb. 2, he pulled an especially unique crappie from Clear Lake, southwest of Minneapolis.

“My first impression was that I thought that it was a little bit darker than I thought, Konakowitz told to WEAU 13 News. “Maybe it was a sunfish, but then I got it out of the hole and thought, ‘what the heck is this?’”

While he knew the nine-inch fish in his hands was a crappie, it was unlike any he or anyone else had ever seen.

“I pulled it up and I couldn’t tell what it was, and I thought maybe it was a sunfish because of the colors,” says Konakowitz. “But it had the body of a crappie and it was really golden.”

Konakowitz kept the fish and shared photos of it on social media to spread news of his unusual catch. He learned he’d caught a golden crappie, more accurately known as a “xanthic” crappie, a genetic mutation that makes fish skin pigments orange or yellow, which scientists say is extremely rare.

Such crappies are not common, says Loren Miller, a fish geneticist at Minnesota’s Department of Natural Resources.

“They are kind of rare mutations, so you have to have a couple of parents carrying them so they can produce them,” Miller told WEAU News. “They glow, so obviously, out in the wild there are a lot of big fish out there waiting to eat them. So it is a surprise that many at all would make it to get that large, that old.”

Xanthic fish are similar to albino animals. Such fish have extra skin pigment and flash.

“This fish probably had numerous brothers and sisters that were yellow but died or were eaten at a young age,” says Miller. “So none of them make it. But it means those genes are in that lake too, which means another one could show up at another time.”

Konakowitz says he’ll have a replica mount made of his golden crappie to remember the rare catch.