Due to its accessibility and low overhead, kayak fishing is becoming increasingly popular amongst U.S. bass anglers 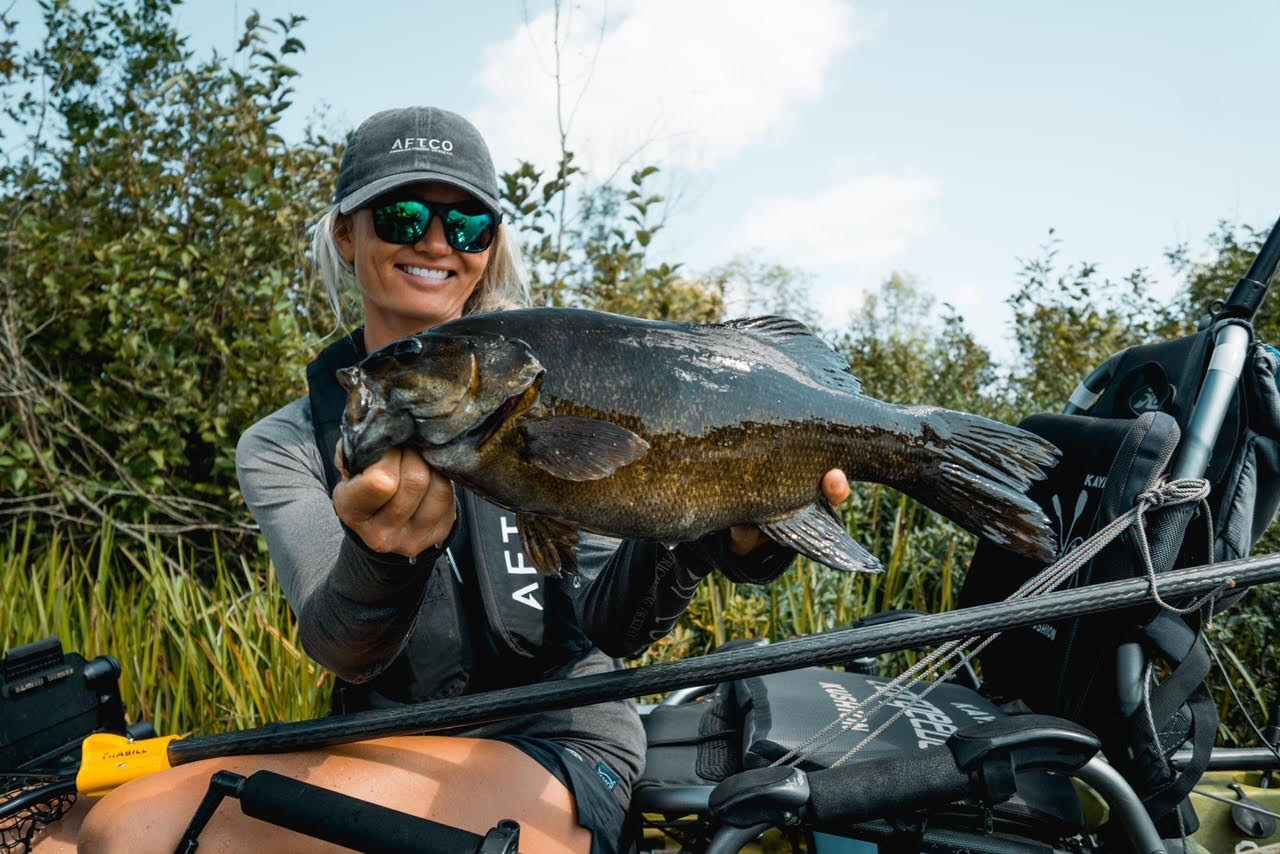 The author is one of about 20 anglers who make a living kayak fishing. Kristine Fischer
SHARE

My love affair with competitive kayak fishing began five years ago. I was working on a customer’s compound bow at an archery shop when someone brought in a flier for a local kayak fishing tournament. As I clicked the lighter to burn the ends of the thread, I abruptly decided I wanted to enter. By the end of my shift, I had purchased a used fishing kayak for $800. I grabbed an old milk crate to store my gear, found a life jacket, and eagerly showed up early on the morning of the event. I took third place and have been hooked ever since.

I started fishing every small event I could find, and qualified for national events across the country. After two years of fishing local, I made the transition to fishing full-time, and have been able to make a living as a kayak angler. In I won the 2021 Hobie Bass Open Series Tournament of Champions, the most prestigious tournament in kayak fishing.

The History of Kayak Fishing

Saltwater and freshwater kayak fishing tournaments began over a decade ago. Some of the pioneers to the sport include Marty Mood, Chad Hoover, Marty Hughes, and Jim Sammons. Due to accessibility (all you need is a kayak and fishing gear), competitive kayak fishing has become the fastest-growing segment in the sport. The overhead is very low, compared to fishing out of a bass boat. Although top-of-the-line fishing kayaks exceed $5000, you can still get into the sport of kayak fishing for under $1,000. With less money at stake, the atmosphere is often welcoming, which draws even more folks in.

Professional kayak fishing currently has three national level trails: Hobie B.O.S., Kayak Bass Fishing (KBF), and the Bassmaster Kayak Series (BASS).  Each series offers an open style format, in which anyone can enter and compete. You can register through the trail websites, or use the tournament management applications TourneyX and FishingChaos. KBF does have a small pro-level tour that anglers must qualify for.

The season starts at the end of January and runs through the beginning of November. Hobie has nine to 10 opens and a championship; KBF has 10 to 14 stops plus a championship; and BASS has five to six events and a championship. The cost to enter the opens is about $260 for BASS and Hobie, and $115 for KBF. The regular season opens are either one- or two-day events, and the Hobie and KBF championships last three days. The kayak schedule consists of many of the same lakes as the pro bass tours. Lake Fork, Lake St Clair, Lake Champlain, Lake Kissimmee, Lake Chickamauga, Lake Guntersville, and Lake Hartwell are all frequent stops on the schedule.

The Rules and Regulations of Kayak Fishing

The three trails have similar sets of rules with some slight differences. Anglers can launch from any public ramp, and there are “lines in” and “lines out” times for when you can put in and take out. To catalog your bass, it’s a catch, take a photo, and release format where anglers are given a unique identifier that must be present in the image when submitted. There are no livewells on kayaks to keep fish. This method also returns bass to the water quickly and keeps them healthy. The photos are submitted to a tournament management app, which totals the anglers longest five fish, and features an overall leaderboard. Overall length of your catch determines the winner, instead of weight, like you see in bass boat tournaments.

Other than how we catalog bass, the only major difference in kayak tournament fishing is the inability to load up and run across the lake quickly like you could in a bass boat. And of course, there is no big weigh-in at the end of the day. Kayak anglers break down a lake the same way a boat fisherman does, they just can’t access as much water in a timely manner.

There is crossover. Several kayak anglers fish FLW, MLF, and Bassmaster opens. And some of the BASS pros, such as Mike Iaconelli and Jordan Lee, have jumped into the competitive kayak fishing scene, which has brought more eyes to our sport. These professionals are the best anglers in the world, regardless of vessel. Iaconelli, Lee, and Dave Lefebre all cashed checks in the kayak tournaments they have fished.

Kayak tournaments have gained more respect over the years, but I don’t anticipate they will ever eclipse the pro bass tours, or be as revered as the Bassmaster Classic, which most kayak anglers understand and are fine with. I do see the sport evolving to a true pro series, with higher entry fees and a qualification process to fish the tour.

What It Takes to Become a Full-Time Kayak Angler

Thanks to the growth of kayak fishing, there are about 20 anglers that make enough money to fish full-time. A typical open tournament pays as much as $10,500, and championships run up to $45,000. So, kayak anglers who are consistent have ample opportunity to get paid. And your overhead is low. Entry fees are nominal, and gas and lodging can often be $500 or less. Sometimes you will spend $1,000 on an event, but that’s not the norm.

Here is a look at five of the most decorated and talented kayak anglers on tour (in no particular order.)

2. Guillermo Gonzalez (Fort Worth, Texas): A native Puerto Rican, he fished in college at Texas Christian University, and has been kayak tournament fishing since 2013. Gonzalez is one of the very few anglers left that competes in a paddle kayak. Most of us have a pedal-drive kayaks.

3. Cody Milton (Searcy, Arkansas): Another talented competitor that came from the bass boat world, fishing FLW and MLF in his early teens. He has been fishing kayak tournaments since 2016.

5. Drew Gregory (Kent, Ohio): Founder of River Bassin Kayak Tournament Trail, Gregory is known for his vast knowledge of fishing moving water. He is also the most consistent kayak angler at the national level.