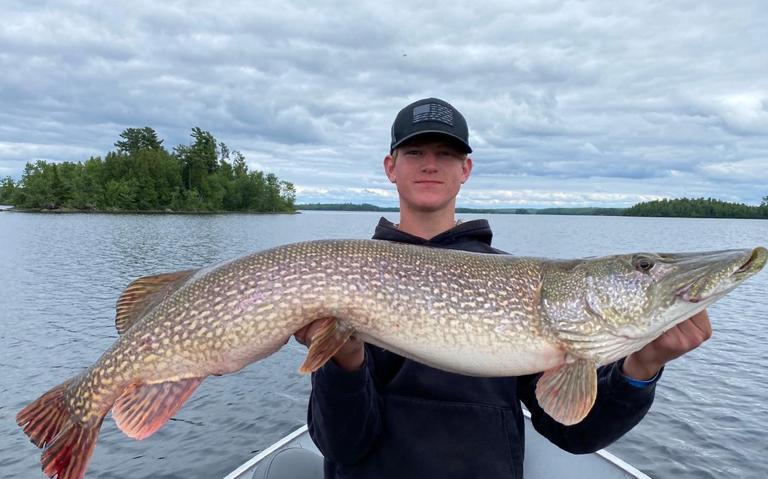 A pair of record sportfish were caught and released in Minnesota this summer by two out-of-state anglers.

A 46.25-inch northern pike was caught from Minnesota’s Basswood Lake on June 19, 2021, by 15-year-old Brecken Kobylecky from Geneva, Ill. His released fish beat out the previous catch-and-release pike in Minnesota of 45.25 inches from Rainy Lake.

Kobylecky was trolling for pike with an Ely-based fishing guide on their final day of fishing.

“We hooked onto a huge pike that was barely hooked, and could hardly land it due to the sheer size and weight of the fish,”Kobylecky said in a DNR report. “The whole experience went by in a flash, but it was an experience of a lifetime I’ll never forget.”

The pike was carefully measured and photographed in the boat following the catch, then was released back into Basswood Lake. It’s the biggest fish young Kobylecky has caught.

Kirby, from Hudson, Wis., is familiar with Lake Vermilion, and knew some hot spots for muskies.

“There was a huge storm moving through creating extremely unstable conditions,” said Kirby to DNR.  “The humidity was high, and storm clouds were building. It was one of those nights that fish seemed to be super active, our boat had multiple chases, one resulting in a 48-inch fish in the net — at that time my personal best.”

Read Next: How to Catch Post-Spawn Muskie with Smaller Baits

Kirby continued fishing, and around 10:30 p.m. something hit his bait hard just 15 yards from the boat.

“I compare it to reeling in a large moving log, and after a few dark splashes, she was in the net. Everything just happened so fast!” Kirby said. “My bait just happened to be the one that she ate, but that whole night couldn’t have been possible without the help of [fishing partners] John and Will Gavic. Muskie fishing is a team effort, and when you have a good team on your side, landing [and releasing] a fish of that caliber creates a memory of a lifetime.”