Steelhead were illegally taken from a collection site on Woodward Creek 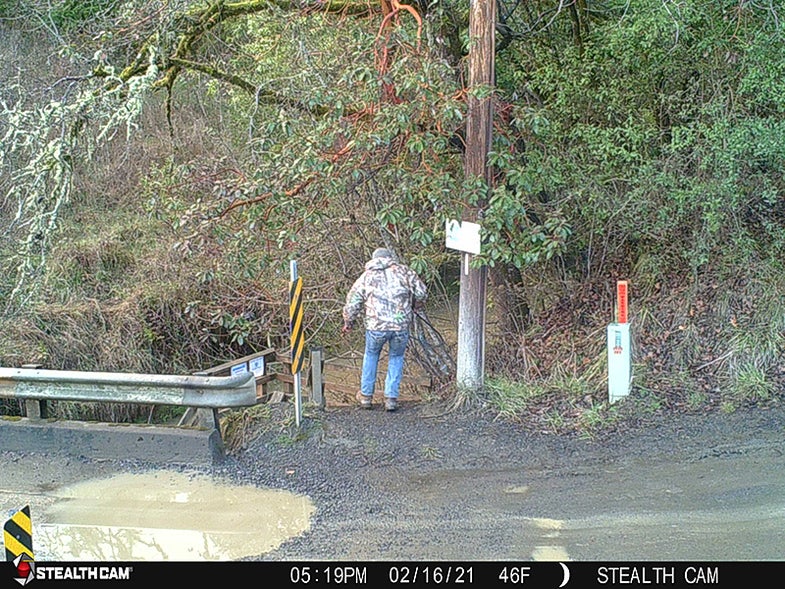 Suspect in the Oregon steelhead-poaching incident caught in the act.
SHARE

The steelhead run in Woodward Creek near Powers, Oregon, is an important one. It’s a place where state biologists collect mature fish for hatchery spawning and stocking to ensure continued good fishing.

Specially-designed fish traps are installed by the state there to collect male and female steelhead to induce spawning, then grow them out to young smolts for restocking.

But poachers were swiping ripe fish from creek traps, according to the Oregon Department of Fish and Wildlife on their website. Thieves also were pulling steelhead out of brood-stock boxes, which are anchored offshore and submerged in water so anglers can contribute live, healthy fish they catch to the breeding program.

Several times the Woodward Creek trap was found empty after volunteers reported seeing fish in it.

“We’d get a call from a volunteer saying there were six or seven fish in a trap,” says district biologist Mike Gray. “Then when we got there, the trap was empty. We found evidence that the trap had been damaged, so we knew someone was getting in there.”

Trail cameras were set to monitor the traps and nearby waterway. The first night at least three people illegally netted and removed fish from it.

One person, identified through surveillance footage, entered the trap to net fish, then shot one camera and stole another. Troopers caught up with Kaine M. Horner, 24, while he was fishing illegally in a closed area. They seized his rifle, net, and fishing gear. Charges have been filed against Horner.

“These are not legal anglers,” said Sergeant Levi Harris of the Oregon State Police who is leading the investigation into the thefts. “These are opportunistic people who have no respect for the vulnerability of these fish while they are in the traps.”