Noodle Rods and Egg Patterns: A Primer for Winter Steelhead Fishing Around the Great Lakes

New to chasing cold season chromers on Great Lakes tributary streams? Check out these tips before hitting the water 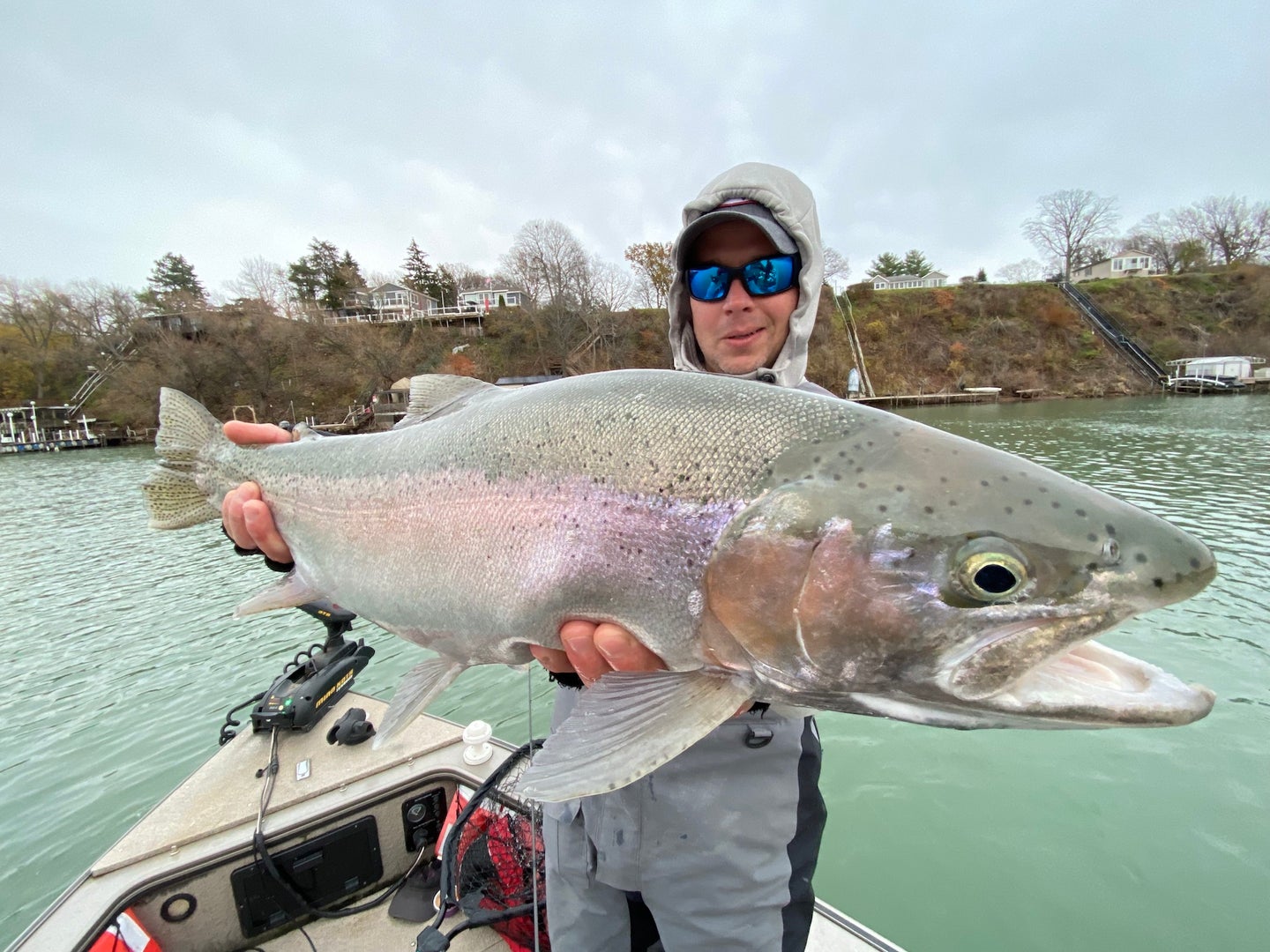 Jim Fee with a winter steelhead on the Niagara River in New York. Joe Cermele
SHARE

Winter steelhead fishing along the Great Lakes can be some of the most fun you’ll ever have. It can also be some of the most difficult and miserable fishing you’ll ever experience. I’ve had it both ways, and I’ve been lucky enough to chase them in tributaries across their entire range from New York to Michigan. On one hand, the cool thing about Great Lakes steelhead is that they are accessible to everyone. But targeting them—especially in the winter—can be daunting for the uninitiated. Not only do you have to brave the cold, but you also have to be prepared to fight a fish that has far more power and stamina than your average resident stream trout.

Read Next: The Insane Cult of the Lake Erie Walleye

To even get to that point, though, you have to first figure out what they want to eat, which, as you’ll learn, is both simple and kind of complex. There are many nuances to steelhead fishing that will be learned over time, but if you’re brand new to steelheading, you’ll be ahead of the game with a little primer on how to gear up and what to tie on the end of your line.

Where you’re fishing for steelhead and how you prefer to catch them naturally factors into rod-and-reel selection. There are, however, some common threads when it comes to tackle. Steelhead are incredibly strong, and they will change direction in a blink. It’s during those quick direction changes that you most often lose the fish. They introduce slack into the line, and it happens so quickly that it’s difficult to compensate by reeling in fast enough. But a good steelhead rod will compensate for you.

If you’re fishing from shore, you want a rod with extra length and a slower action near the tip—what’s often referred to as “soft action.” Spinning rods designed specifically for steelhead can measure as long as 12 feet and have slow noodly tips, hence the nickname “noodle rods.” If you’re a fly angler, opt for a 10- to 11-foot rod in the 6- to 8-weight class instead of the standard 9-footer. With both rod styles, the extra length and give in the tip will help maintain better pressure during quick turns. Though additional length is less critical when fishing vertically from a boat, a rod with a slower action is still beneficial for surviving the fight.

Another common thread runs through the rigging process. During the winter, steelhead tend to be stacked right on the bottom in deeper holes and runs with slower current, so it’s critical that your offering gets down fast. One of the most commonly used rigs features a pencil lead that slides freely on the main line ahead of a barrel swivel that acts as a stopper. A 2- to sometimes 4-foot fluorocarbon leader in the 6- to 10-pound range gets tied off to the opposite side of the swivel, and your egg or fly goes on the end of the leader. Thin, cylindrical pencil leads are designed to tick along the bottom without getting hung up. I’ve chased steelhead in Michigan and seen this same rig used on fly rods, though split shots are more commonly used for getting flies down faster. The need for ample lead that will drop into the zone quickly is what spawned the nickname “chuck-n-duck” fishing. It’s not the sexiest way to fish, but if you dial in what those winter steelhead want to eat, it’s certainly the most effective.

Entire books have been written about what flies and lures to throw for steelhead, but it doesn’t have to be that complicated. The fact is that no matter where you’re targeting winter steelhead along the Great Lakes, fish eggs are going to be one of their primary food sources. In many areas, steelhead are sharing spawning tributaries with salmon, but even long after the salmon are gone, steelhead will slurp salmon eggs. They’ll also feed on their own eggs during the winter, as well as the eggs of lake trout and suckers that often cohabitate their streams and rivers. The bottom line? When you have no idea what to use, tie on an egg.

Eggs, of course, come in all shapes and sizes. You might use a ball of natural eggs cured in brine and held together with a piece of mesh netting material. You could also use an egg fly made of yarn, or one of the many synthetic soft-plastic eggs on the market. In recent years, anglers have gravitated toward using plastic beads to represent eggs. These are pegged on the line with a toothpick or rubber stopper a few inches above the hook, and when the fish takes the bead, the hook slides up, catching the fish on the inside or outside of the mouth.

The most difficult part of fishing any kind of egg pattern—whether cured and dyed or entirely synthetic—is choosing a color. But one thing I’ve learned over the years is that you don’t choose the color. You let the steelhead decide. You do, however, have to start somewhere, and the best place if the water is clear is with muted, natural tones, like pastel pink, orange, tan, or yellow. If the water is off color, start with more vibrantly colored eggs that bright orange, chartreuse, or neon yellow.

There will be days when it takes several changes to dial in the right color, which is why carrying a healthy variety is smart. There are so many types of egg flies, dye colors for natural eggs, and bead colors that it can get rather overwhelming. But unless someone clues you into a color that’s been on fire wherever you’re fishing, always carry at least a few oddball colors like blue, purple, and green. It makes no difference that there’s nothing remotely natural about them, and I’ve experienced many days on Great Lakes steelhead rivers where Cookie Monster blue was the only color they’d slurp.