The chunky 2-pound, 2-ounce panfish is a banner-size sunfish but a small target for an archer 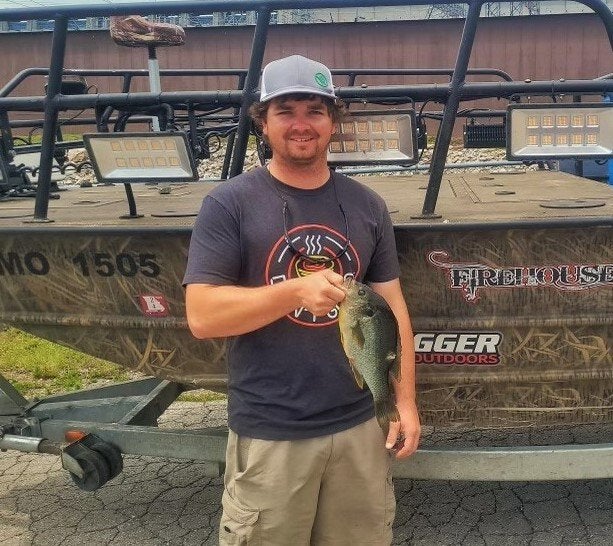 “It’s pretty crazy because this was my first time bowfishing,” Hunt told the MDC. “It was my buddy’s 21st birthday and we decided to go bowfishing. We had a guide take us out on Table Rock Lake.”

Hunt and his buddy shot a few carp there, then moved on to Lake Taneycomo.

“I got up to the front of the boat and actually thought it was a big shad,” Hunt said. “I reeled it in and said, ‘Well, that’s not a shad!’ The guide saw it and said, ‘I think you just got a record!’”

MDC staff verified the fish’s weight at Shepherd of the Hills Fish Hatchery in Branson, Missouri. Hunt’s heavy sunfish was weighed on certified scales at 2 pounds, 2 ounces. That’s one ounce heavier than the previous Missouri redear record of 2-pounds, 1-ounce. That fish was taken by archer Alex Phillips on Table Rock Lake in April 2021.

Hunt plans to have his record sunfish mounted. His is the fourth Missouri record fish thus far for 2022.

Bowfishers commonly shoot carp, gar, and other so-called “rough” fish, all of which are considerably larger and generally easier targets than panfish. Additionally, refraction makes hitting a submerged target difficult for archers, so a fish as small as a redear sunfish is particularly challenging.