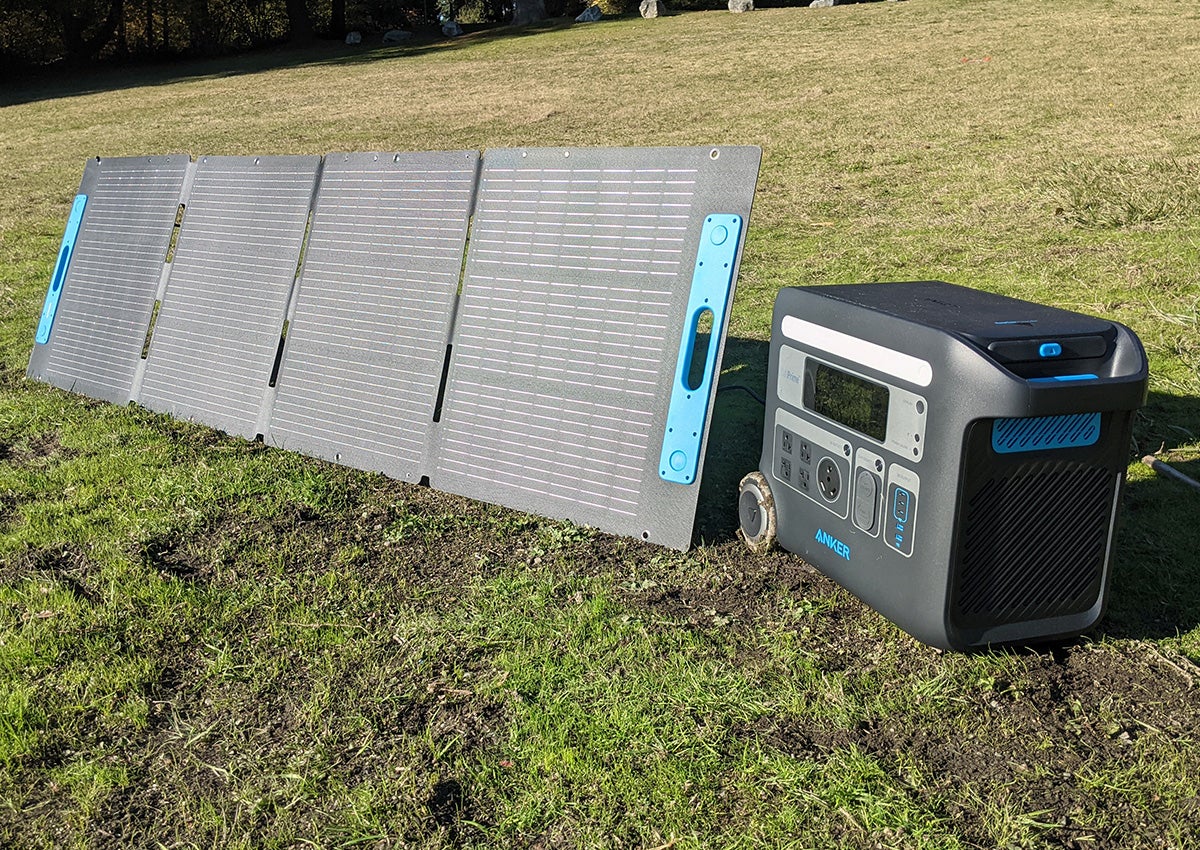 While solar generators have become something of the norm for the overlanding and camper van sets, the same can’t be said for everyone. Roll up to a campground or KOA filled with RVs, and you’re liable to have the roar of a gas-powered generator competing with the crackle of your campfire. But the watt hour potential of solar generators has been nudging up for some time, edging closer to the power needed for a mobile home. With the Solar Generator 767, Anker took the next step by adding in the 30-amp RV plug. I recently tested this model out to see how it handled big power loads.

The Anker Solar Generator 767 is reasonably portable and supplies an impressive amount of power—and comes with a number of features that make it easier to use than the competition. This solar generator setup consists of three parts: one power station (the 767 PowerHouse) and two panels (531 Solar Panel), along with the charging cables you’ll need to connect the three parts together. The PowerHouse has a capacity of 2400 watt hours, which mirrors the typical daily power usage for RVers, and has a convenient 30 amp RV plug: rare for power stations of any size. It also pairs to an app that connects your smartphone to the power station component via Bluetooth, allowing you to monitor the power input and output, as well as control what ports are in use, and even remotely turn on the attached light.

Of course, you’re unlikely to be out in your RV for only a single day, which is where the two 531 solar panels come in. These are billed as 200W panels, which is the amount of energy they would be able to convert from sunlight in perfect conditions—assuming both panels delivered this maximum output consistently, they would fully recharge the power station in six hours.

Let’s look at how this setup performed during testing.

Testing the Anker Solar Generator 767 in the Field

The Anker 531 Solar Panel was the simplest to use of the larger solar panels I looked at in my test of the best solar generators. While it wasn’t quite as powerful as the Jackery SolarSaga 200W, it easily produced over 75 percent of its 200W capability, which would recharge the PowerHouse 767 in eight hours. However, you can chain up to five of the Anker 767 panels together (the PowerHouse 767 can handle a maximum input of 1,000 watts), which could cut the recharge time down to as little as 2.4 hours.

One small detail I especially liked was the small mesh bag and carabiner clip for stowing the cord that attaches to the solar panel when not in use—this made storage a snap while contributing negligibly to the overall weight and convenience of the panel.

During the in-home portion of my testing, this unit was more than capable of taking on every device I could throw at it without blinking. This is definitely overkill if you’re looking for a unit to power your phone during a power outage. The AC outlets alone can manage 2400 watts—your average fridge only uses 250W or so at a time, so this is more than enough for most purposes.

In fact, it has so much power that I didn’t come anywhere near maxing it out during testing. (Strangely, this unit only has four AC outlets compared to the six on the Anker 555 unit, which has half the capacity.) So no surprise here that it was also the only unit in my test that had a plug for an RV; fitting, since the total capacity of the Anker 767 is equal to about a day’s worth of power usage by an RV.

While testing this unit out in the field, I found that the wheels on the Anker 767 PowerHouse were more than capable of handling uneven surfaces and muddy conditions. Lugging this 67-pound unit up and down stairs, however, was not as much fun.

What the Anker Solar Generator 767 Does Worst

At 67.3 pounds, the Anker PowerHouse 767 is heavy, even for its purported battery capacity. (By comparison, the Jackery 2000 Pro has a watt-hour capacity of 2,160—just 240wH less than the PowerHouse 767—and is only 43 pounds.) This power station is so heavy that it comes with a telescopic handle to save your back while you are carting it around.

While the ports are overall fairly balanced in terms of type and variety, I was surprised to see that there was no input power function for the USB-C port, an extremely common cable, especially with newer electronics. While organized overlanders and campers are unlikely to notice its absence, if you (like me) are prone to losing errant cables that aren’t attached to a device in some way, then this could limit your ability to recharge your power station at home before taking it into the field.

While I have lots of positive things to say about the Bluetooth app, I should note that it does appear to use some power while in use (that the device does not account for when telling you what the power output is), and tends to disconnect easily. Similarly, after using the power saving function several times, I’m unimpressed—it sometimes turns off outlets before a piece of gear is finished charging and doesn’t reliably turn off when they are.

Strangely, the 200W Anker 531 Solar Panel did not have the same sundial component as the 100W Anker 625, my pick for the best solar panel for camping. This feature can make a substantial difference in your recharge times, as the Anker PowerHouse 767 recorded a 23-watt difference in power input when I ever so slightly adjusted the 531 to match the sundial-positioned 625 panel. I recommend purchasing a separate clip-on to compensate.

What the Anker Solar Generator 767 Does Best

As stated above, the PowerHouse 767 handles massive energy demands like a champ, powering everything I could throw at it without blinking. If you’re looking for a power station that will keep your refrigerator on through an overnight blackout, then this is an excellent choice. And the additional plugs mean that it can also handle the power needs of a camper van or RV setup. And while the Anker 531 Solar Panel was not as powerful during testing as the Jackery SolarSaga 200W, it did provide plenty of power to the PowerHouse 767.

While testing the best solar generators at home, I had to go outside pretty often to check that each setup was still working as intended. That got pretty annoying after a while. But with the Anker 767, I could just open the app up and check to see how much power was being generated (or not). In addition to showing me the current power capacity of the unit, it also gives you the ability to turn off and on the AC, USB, and DC ports, as well as turn on the light on the side. It also shows you the internal temperature of the unit. Only two of the solar generators that I tested had apps, and this was by far the best one.

I liked that the 531 Solar Panel didn’t have a separate carrying case to mess with, and a simple carabiner and mesh bag combo did the trick to stash the relevant cable and ensure it didn’t become separated from the larger unit. The kickstands on the solar panels were a little cumbersome, but extra reinforcement on each of the three legs was useful to an extent when adjusting the panel to a lower angle.

While RVers will appreciate the addition of a plug specifically designed for their setup, details such as the telescoping handle, ability to chain together five panels, and accompanying app makes the Anker Solar Generator 767 a smart choice for anyone with serious power needs when off-grid or at risk for prolonged power outages. The only limiting factor (besides the price tag) is the weight. At over 65 pounds for the power station and 20 pounds for each of the solar panels, this setup is heavier than other comparable models on the market.