The Waterfowl Performance Shop 20-gauge is a favorite of many duck guides, but the M2 is also a capable turkey, upland, deer, and self-defense firearm 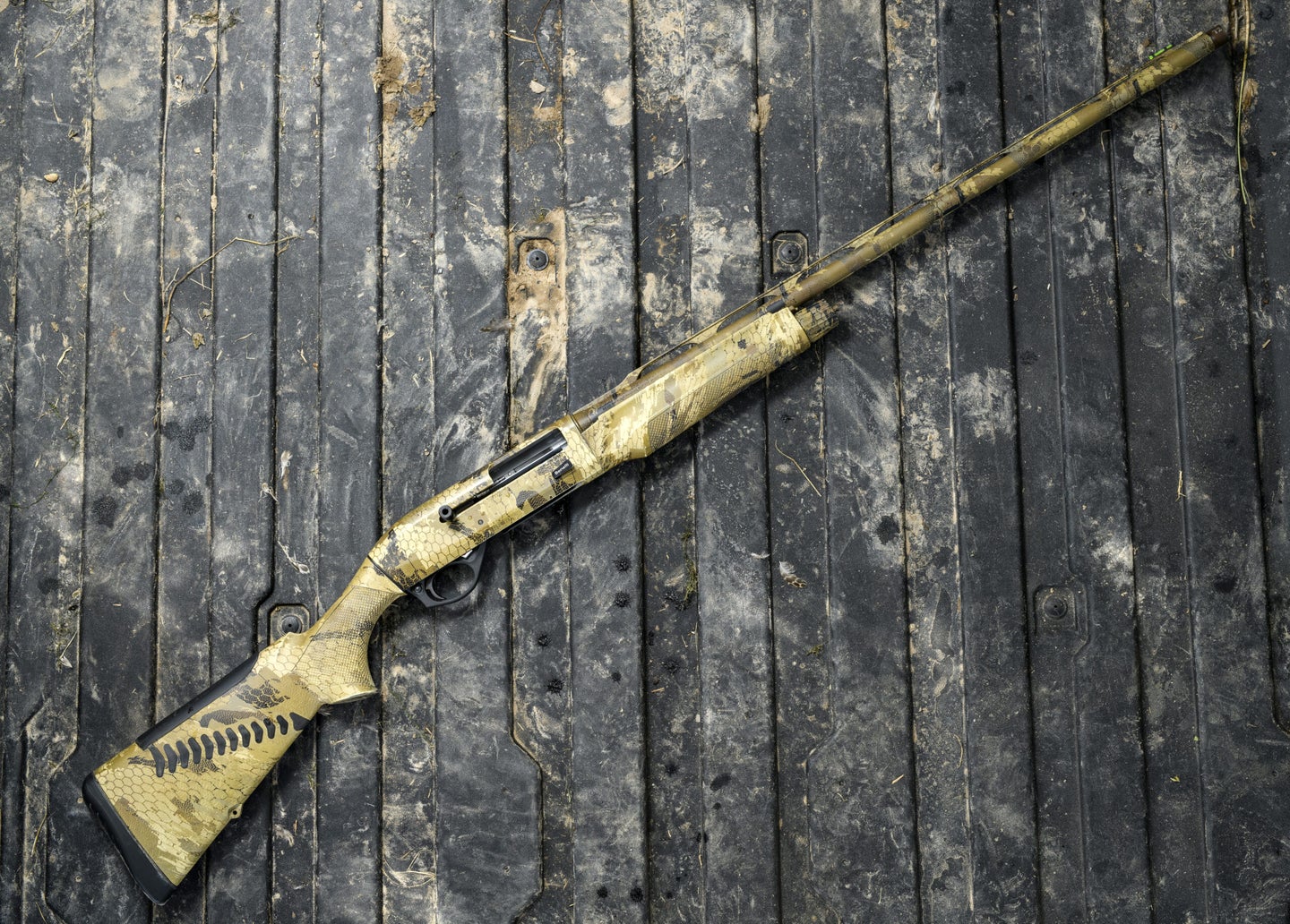 Duck guides and public-land hunters are saddled with carrying in all the gear it takes to pursue waterfowl down levees and through the shin-deep mud of flooded agriculture fields. To mitigate some of that weight, many guides and walk-in hunters have replaced heavier 12 gauges with 20 gauges, specifically the Benelli M2.

When you’re walking in all that gear and running down cripples with the dog, having a lighter gun in your hand makes a big difference, particularly when you’re doing it 60 days (or more) a season. And with the advancement of steel shot and other non-toxic, loads, a 20-gauge is more than capable of killing any duck cleanly at reasonable distances. The M2 has become a popular option among duck guides because it is so light (just 5.9 pounds). And the M2 has the same reliability that the more famous Super Black Eagle 3 is known for, it just doesn’t cost as much if you buy the standard 12- or 20-gauge Field version. The Waterfowl Performance Shop model (our test gun) is more expensive than the SBE3.

The M2 has also been built for many different pursuits. It’s a platform that can be used for 3-Gun, self-defense, turkey hunting, deer hunting, and clay shooting. It’s Benelli’s most versatile semi-auto, and also one of the most versatile shotguns you can own.

How We Tested the Benelli M2 Waterfowl Performance Shop

Four editors—Colin Kearns and Phil Bourjaily from Field and Stream, plus Alex Robinson and I from Outdoor Life—tested 17 shotguns over three days at Pintail Hunting Club in Garwood Texas. It was early teal season, so we hunted bluewings in the mornings and shot the guns on five-stand in the afternoon. Bourjaily and I also patterned every gun on a 30-inch circle from 35 yards. Typically, shotguns are tested at 40 yards, because that’s the distance they typically see a dip in pattern performance. But we shot the guns at a yardage most duck hunters could legitimately kill birds, and 40 is a stretch for many.

Each editor considered five different categories while testing the 17 shotguns, including how the gun handled and its ergonomics, workmanship and aesthetics, versatility, reliability, and value. All of us tried to make the guns fail throughout the three days of testing, loading the guns at different angles and shooting them from multiple mounting positions, all things that happen while you’re duck hunting.

The Benelli M2 Waterfowl Performance Shop 20-gauge is an inertia-driven shotgun, like every other Benelli except the gas-driven M4 and R1 rifle. Gunsmith Rob Roberts fine-tuned this line of the M2 by lengthening the forcing cones and including three of his Triple Threat chokes for optimal patterns. Roberts recommends the T2 chokes due to the tighter bore diameter of Benellis, which range between .620 to .625 in 20-gauge. The Performance Shop 20 is only available in Gore Optifade Marsh camouflage, but the standard M2s in 12- or 20-gauge are offered in black synthetic, Mossy Oak Shadow Grass Blades, Realtree Max-5, and Optifade Timber.

Here are the features included with the M2 Waterfowl Performance Shop:

We patterned the Benelli M2 on a 30-inch circle at 35 yards, shooting 3-inch Hevi-Metal Long Range No. 4s with a charge weight of 1-ounce and muzzle velocity of 1,350 fps through a Rob Roberts Triple Threat T2 choke. The M2’s best pattern placed 103 of a possible 180 pellets (57 percent) inside the circle.

The pattern results from the Benelli M2 were at the low end of our test, which was disappointing considering this is a custom gun. A lot of the new Benellis tend to pattern 80 to 100 percent above point-of-aim, but they also usually place a high percentage of shot on paper. Benelli guns, like the SB3 and the ETHOS Cordoba, shoot best If you hold the gun barrel below a duck, like a trap shooter would on a clay bird, and pull the trigger. But the M2 shot closer to 40 percent above and 60 percent below (with a slight shading to the right) of center. The core of the M2 pattern is decent, so if you’re an accurate shot, there won’t be an issue. But also, the gun costs over $2,600, so it should have produced a better pattern percentage.

The Benelli M2 Was Built for Speed

Most folks buy a Benelli because they are reliable, slender, and lightweight shotguns. Duck hunters that must walk into their blind or a public-land stake appreciate those three features the most, because they don’t want to walk back to the truck if their gun fails and grab a spare; they want a gun that doesn’t take up space; and a gun that doesn’t weigh them down. The Benelli M2 is a joy to carry and shoot, like most Benellis are. Its inertia-driven operating system keeps the weight down and that also allows you to get the gun moving faster, which is important to duck hunters because ducks fly fast and can be in and out of the decoys in an instant. I appreciated how quickly I could bring the M2 to my shoulder on our Texas bluewing teal hunts. Birds came out of nowhere 30 minutes before sunrise and having a shotgun that carries more like a toothpick than a 2×4 is incredibly beneficial because you can get shots off faster.

Benelli Cut No Corners on the Workmanship of the M2…Almost

The Performance Shop gun comes with an oversized bolt handle and slammer bolt-release button, which makes it easy to load the first shotshell into the chamber. Roberts also lengthened and polished the forcing cone. The forcing cone is located inside the barrel just in front of where the shotshell sits when it is in battery. Most standard forcing cones are less than ½-inch long, so Roberts extends the cone to around 3 inches. A longer forcing cone allows any stray shot to rejoin the shot string and deliver more pellets all at once when the payload strikes the target.

Benelli includes three Triple Threat chokes, but you only need the T2 for waterfowl and most other hunting pursuits outside of turkey and deer. Roberts told me that the T2 patterns best with Benelli and Beretta guns and the T3 is better for Winchester and Browning. The two Italian gunmakers build their auto-loaders with tighter bore constrictions so you don’t need as much choke for optimal patterns. Winchester and Browning barrels have a slightly larger bore size, and so they need a tighter choke for best results.

The one misstep Benelli made with this gun was the loading port. It’s not wide enough. Every one of our testers found it difficult to slide shotshells into the magazine without getting a finger pinched. I have big hands and it was particularly bad for me. I loaded the gun more than 150 times over three days, and it peeled the skin away from my right thumb and left it bleeding by the end of the trip. Plus, loading a shell with gloved hands was a chore. That’s a small inconvenience, but this was also the most expensive gun in the test (and one of the pricier duck guns you can buy), so you should be able to easily load it.

It’s a Benelli, So the M2 Is Reliable and Versatile

When we unpacked the Benelli M2 in Texas it was incredibly dirty and would not cycle a second shell. I sprayed some Rem oil into the action, wiped it down, and it functioned flawlessly. Benelli guns must get extremely grimy not to run properly, but they also don’t require much of a cleaning, which is nice when you’re in the field so long as you have a canister of gun oil in your blind bag. The Performance Shop gun we tested did not have the spring inside the bolt that helps the rotating bolthead close like the Super Black Eagle 3 has. That spring ensures the bolt closes and places the shotshell into battery every time. But the M2 also never failed to fire.

You can also use the Performance Shop gun for upland and turkey hunting, or clay targets. The 12-gauge M2 is available in a slug gun model for deer, so if you buy the 12 and deer hunt get the 24-inch rifled barrel, mount an optic, and use it for firearm season. There is also a 12-gauge tactical version of the M2, so it could serve as a home-defense gun too if you buy the 12-gauge.

There’s no arguing the M2 Waterfowl Performance Shop is a well-built gun, but the price is confounding. A standard M2 Field has an MSRP of $1,449 while the Performance Shop model is $2,669. The extras on the Performance Shop gun include the forcing cone lengthening and polish, three Rob Roberts chokes, oversized bolt handle and bolt-release button, and a paracord sling. That adds up to a $1,220 difference in price. If you want an M2, consider buying the Field gun. You can send it to Roberts to have the forcing cone lengthened ($75), buy a T2 ($80) for ducks and a Final Strut turkey choke ($80) if you hunt gobblers, and pick a custom Cerakote finish ($350) you want instead of being stuck just with the Optifade Marsh option. That’s a total of $585 of extras, and you will essentially have the same gun as the Waterfowl Performance Shop without the extended bolt handle and slammer button—both of which you can put on yourself—and minus a T1 and T3 choke, neither of which you need because they don’t pattern as well from an M2 as the T2.

If you’re looking for a 20-gauge auto-loader it’s tough to do any better than the Benelli M2. Beretta’s A400 and the SBE3 are the only semi-autos in 20 currently in production that are its equal. It’s a reliable and durable gun that will likely last your entire hunting career. I just can’t recommend buying the Performance Shop model at the sticker price when you can get virtually the same gun for more than $600 cheaper if you buy the M2 Field and send it to Roberts for aftermarket upgrades.