Pressured Ducks Snubbing Your Decoys? Try Setting Up Far Away From Crowded Shorlines 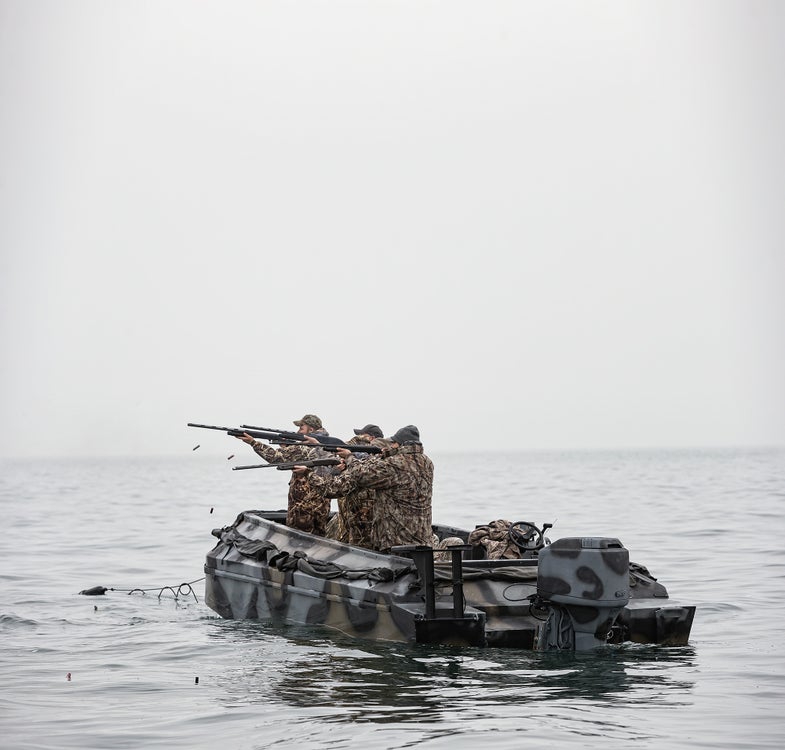 While hunting diving ducks is much different from chasing puddle ducks, waterfowlers from both worlds face one similar challenge—consistently decoying pressured birds. And the problem becomes magnified as the season progresses. Lake Erie duck guide Captain Nate Dunahay (quacksmackerguide.com) has unlocked access to notoriously suspicious canvasbacks and redheads on the Great Lakes by employing sea duck tactics that he learned while hunting sea ducks and coastal geese off Long Island.

Dunahay notes that most diver-duck hunters in Lake Erie set up fairly close to shore, where birds are pressured and wary. Dunahay’s solution is to get away from the crowds.

“We usually run anywhere from 7 to 10 miles offshore to get away from other hunters,” he explains. “We’re getting away from the competition, but we’re also seeing much bigger numbers of birds.”

Dunahay searches for flocks of rafting birds in open water. He’s looking for big collections of birds—rafts of thousands of birds that could cover a football field—and when he finds them, he wants to learn whether they are feeding or loafing. He uses a good-quality, high-power binocular to observe birds from a distance. As long as the waves aren’t too high, visibility is good for well over 2 miles across open water.

“If the birds are over shallower water and they are diving, then you know they’re probably feeding,” the guide says. “If they are over deeper water and you notice some of the birds with their heads tucked under their wings, they are probably loafing.” Dunahay’s strategy revolves around finding rafts of both feeding and loafing birds several miles apart. Then he sets up between the two locations, hoping to intercept smaller groups of birds traveling between them.

“An ideal separation between loafing and feeding birds is between 2 and 3 miles,” says Dunahay. “When it works, it works. I’ve had 2,000 birds decoy into my blocks, but that doesn’t happen very often. Usually it’s anywhere from several dozen to several hundred. That’s plenty.”

As long as he doesn’t disturb the main raft of birds and the weather remains stable, Dunahay can hunt the same location for several days. The ducks use the same flight paths to and from the feeding and loafing locations, so paying close attention to their routes results in several good shoots.

Dunahay adds a black-and-white flag to his decoy blocks in order to get the attention of distant birds. And he uses far more hens than drakes in his spread—about four hens to every drake. The reasons: Most other hunters’ spreads are heavy on drakes (most decoy sets are sold with more drakes than hens), so by inverting the sex ratio, his decoys stand out from the crowd. Second, Dunahay believes the brown of hen decoys is more visible in open water than the white of the drakes, especially over the long distances these big-water birds cover on their approach.