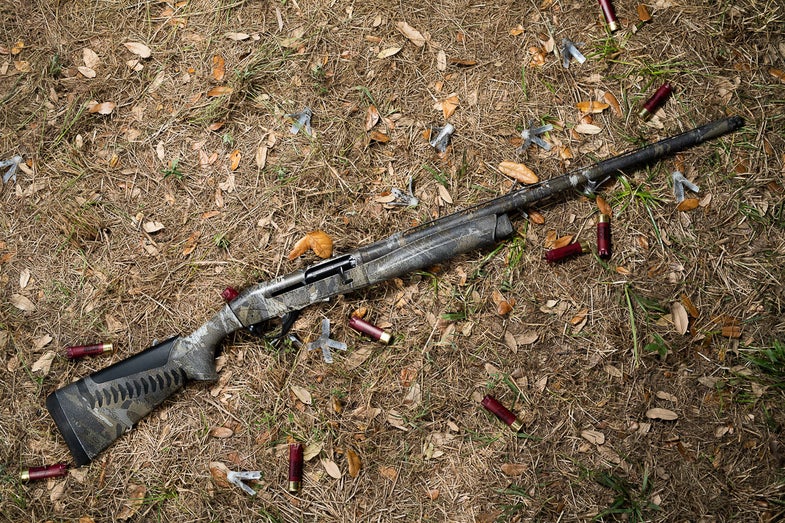 Since it was introduced in 2017, the Benelli Super Black Eagle 3 has established itself as one of the most reliable and rugged autoloaders for duck hunting and other pursuits. Stephen Maturen
SHARE

When the Benelli Super Black Eagle 3 was introduced the Italian shotgun maker wanted to make a splash, so they organized a sea duck hunt in Alaska. When it comes to proving a shotgun’s mettle, there’s no tougher environment. Combine salt, sand, cold, and high winds with birds wearing an armor of thick plumage that tear across the open water like Chuck Yeager, and you’ve got the makings of a real test for both hunter and gear. Talk about tossing the SBE 3 into the deep end.

In fact, talk to veteran sea duck hunters and you’ll find that many don’t think a semi-auto has any business being in a boat trailing a string of eider decoys—even one with the reputation for reliability that the SBE has cultivated over the last 25 years. For these salts, only shotguns that go cha-chunk when you run the action are fit for this kind of work.

They have a point. It doesn’t take much sand and grit to grind a semi-auto to a halt, especially when the temperature drops. So Benelli’s choice of venue would either prove to be a display of well-founded bravado or of fate-tempting hubris, depending on the hunt’s outcome.

The SBE 3 represents a major reworking of the platform, both in terms of the mechanical operation of the gun and it’s ergonomics.

One of the biggest improvements is with how the rotating bolt head goes into battery. The infamous “click” one would sometimes experience with Benellis inertia-driven actions—where the gun would not fire because the bolt wasn’t fully locked up—is now much less likely to occur. With the production sample that was sent to me a few months after the hunt (and which will also be featured in next issue’s annual gun test), the test team spent quite a bit of time trying to cause this malfunction but was unable to do so.

The recoil reduction system is also better on the SBE 3. Felt recoil on inertia guns is more stout than on gas-operated systems, and to counter this Benelli beefed up the foam chevrons, butt pad, and cheekpiece in the stock. I found the shotgun quite comfortable to shoot even with 3 ½-inch loads.

Ergonomically, the controls on the shotgun are well done. The bolt handle, bolt-release tab, and cross-bolt safety all operate smoothly and are big enough to manipulate with gloved hands without being overly large. The loading port on the underside of the receiver has a slight bevel to its edges, and the lifter is contoured in such a way that it doesn’t catch on your thumb or glove as you stuff shells in the magazine.

The grip in the SBE 3 extends down deeper than it had previously, and its tight radius gives the grip a more vertical and aggressive appearance. Compared to my first generation SBE, the grip is thicker, which fills the shooter’s hand nicely. This is in contrast to the forend, which on my original is much bulkier and more linear than with the new model. The thinner forend, with its swooping curves, provides good grip and control, and all in all the shotgun has a lively feel to it. The forend cap has been reshaped as well—it looks like a rounded triangle—to make it easier to grasp when unscrewing it to take the shotgun apart.

At 7 pounds 2 ounces, the SBE 3 tips the scales at the right weight for a hard-hitting waterfowl piece: Any heavier and its handling would become sluggish; any lighter and it would be needlessly punishing to shoot.

As you’d expect from a shotgun that costs nearly a couple grand, the SBE 3 comes with some extras. It has a really nice plastic carrying case that includes a set of five choke tubes—two of which are extended tubes (IC and Mod), three that are are flush-mounted (Cyl, IM, and Full).

The shotgun comes in plain black synthetic trim, A-grade satin walnut, or in several flavors of camo including Realtree Max-5, Mossy Oak Bottomland and Gore Optifade Marsh and Timber. For a couple extra hundred bucks you can also have it in the oddly-named BE.S.T. finish, short for Benelli Surface Treatment, which is a high-tech coating that uses plasma, vapors, radio frequencies, and electricity in a vacuum to create an ultra-durable finish.

The SBE 3 In Alaska

But during my hunt, these details weren’t at the forefront of my mind. I was much more concerned with anchoring a limit of the brant that were flying in huge flocks around our layout boats in the eelgrass.

When it came time for me to pop up and start shooting, the Super Black Eagle 3 connected with authority. Geese fell. Ducks splashed down. It made shots on birds passing overhead, skimming the water at top speed at 40 yards out, and with feet down and wings cupped as they were sucked into the decoys.

I spent more than a week shooting the gun up in Cold Bay at the base of the Aleutian Chain. The gun rested on salt-coated kelp, was propped up against barnacle-encrusted rocks, splashed around in the bottom of a wet Zodiak, and ate a diet of magnum waterfowl loads, many of which were coated with rust by day two. The SBE 3 took the harsh Alaskan environment and the tough Alaskan birds in stride, as if the gun were born to it.

We recently took another look at the Super Black Eagle 3 as part of a broad test of waterfowling shotguns down in Texas. Outdoor Life staffer Joe Genzel, who headed up the effort, assembled a field of 17 duck guns and ran them through a battery of drills and hunts to compare them head-to-head. Editor-in-Chief Alex Robinson joined him, along with our colleagues from Field & Stream, Colin Kearns and Phil Bourjaily.

As part of the comparison, they shot the guns on a patterning board at 35 yards where the SBE 3 delivered tight shot patterns that were high. “Our pattern testing confirmed, the SBE3 shot 100 percent above point-of-aim,” Genzel said. “Our test gun was Robinson’s personal gun, one of the early SBE3s. I had a model of the gun that came off the assembly line later sent to me. It was rumored Benelli had fixed the high-shooting issue, but the gun I shot patterned high, just like Robinson’s.”

Despite this, none of the evaluators felt this had any measurable bearing on how well the gun broke clays and killed birds, as long as you get your face down on the stock correctly. With a loose mount, you run the risk of shooting over your intended target, Genzel said.

One thing that really struck the testers was how versatile the Super Black Eagle 3 is thanks to its relatively light weight. “Because it is so light, carrying the SBE3 in the uplands or the turkey woods would not be difficult,” Genzel said. “It is a long gun, so if you’re hunting game in heavy cover, it could be a pain in the ass. Grouse hunting big timber with this gun would not be ideal. You’d be whacking the barrel against every white pine in the forest.”

Read Next: The Best All-Around Shotguns For Under $1,000

The in-hand performance of the shotgun coupled with the quality of its build made it a favorite of the roundup. “This gun was so well liked by our testers, it almost won best shotgun overall. It came down to a final day shoot-off between the SBE3 and Beretta’s A400 Xtreme Plus,” Genzel said. “The SBE 3 is light, sleek, and durable as hell. If you buy one, it won’t disappoint you.”